‘It is infuriating to see a mosque destroyed. Those who destroy a mosque won’t have a problem destroying my children’s home.’ 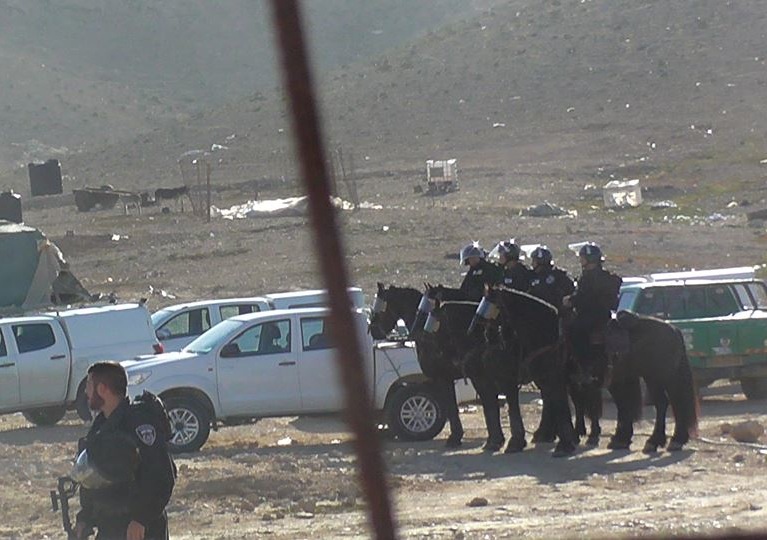 Israeli Police officers accompanied by bulldozers destroyed a mosque Wednesday morning in the unrecognized Bedouin village of Rakhamah in the Negev Desert.

Salima Azazma, one of the residents of the village, told +972’s Hebrew sister site, Local Call, that “It is infuriating to see a mosque be destroyed. Those who destroy a mosque won’t have a problem destroying my children’s home.”

“I am sure that these kinds of things happening in unrecognized villages will turn their residents into big supporters of Israel,” Azazma added sarcastically.

The village of Rakhama, located near the development town of Yeruham, is comprised of 1,500 residents. Some of them have lived on the land for generation, while others were moved there by the state in 1956. The village has no educational or health facilities, nor is it connected to electricity. The state has not paved any roads, nor built sewage infrastructure. The residents of the village get their water from the main pipeline that connects the development towns of Yeruham and Dimona.

On December 24, 2015, Israeli authorities destroyed the unrecognized Bedouin village of Al-Araqib for the 92nd time. The state does not recognize the legality of Al-Araqib and dozens of other villages, demolishing them for the purpose of reclaiming what it deems “state land.” Like Rakhama, many of these villages were established by Bedouin who were re-settled in the 1950s by Israel’s military government after being expelled from their land during the 1948 war.

While demolitions in unrecognized villages have become commonplace over the past few years, a recent report by the Negev Coexistence Forum for Civil Equality revealed that 78 percent of demolitions in the Negev are actually carried out by the homeowners themselves, rather than the state. The report shows how the authorities invest resources and put immense pressure in order to increase the number of self-demolitions. Over the past decade, the Israeli government has recognized 13 previously-unrecognized Bedouin villages in the Negev. However, despite the change in policy, not much has changed much on the ground. In practice, in the vast majority of these villages still lack infrastructure; the services are poor and inadequate for the large number of residents; and the policy of house demolitions as well preventing Bedouin from receiving building permits continue.