Israeli authorities are attempting to impose new censored textbooks in Palestinian schools in East Jerusalem. Jalal Abukhater provides a sample of the changes and argues that censorship of Palestinian heritage and history is illegal, ineffective and dangerous. Students and parents are mounting protests. 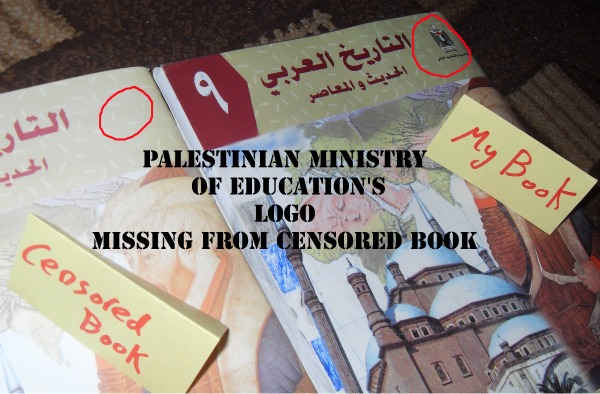 While the mainstream media has been dominated by big stories, others are not getting enough attention. For example, Israel’s Jerusalem Education Administration (JEA) recently decided to enforce the use of new, censored textbooks in all private schools in East Jerusalem. The JEA is a joint body of the Jerusalem municipality and the Israeli Ministry of Education. At present, public Palestinian schools in East Jerusalem administrated by the JEA are already forced to use Israel-issued censored textbooks, and the JEA is trying to force private schools to use them too, despite the fact that it has no authority over them.

The decision was an initiative of Knesset Member Alex Miller from Yisrael Beiteinu, who is also head of the Knesset’s education committee. Miller stated (Hebrew) that in East Jerusalem “the whole curriculum should and must be Israeli.”

At the start of the 2011-2012 academic year, students and parents protested against the decision to impose the new censored curricula upon their schools. Students and parents have threatened to escalate their protests if the JEA keeps up its pressure and have said they will not attend the schools if the school administrations comply with the JEA decision. This action by the Israeli Education Ministry is completely illegal under international law, which considers East Jerusalem to be occupied territory; as such the move is yet another direct violation of the Fourth Geneva Convention and the International Covenant on Economic, Social and Cultural Rights, specifically Article 13 of the ICESCR. The move  aims to deform Palestinian identity; the changes in the textbooks are dangerous and cannot be ignored.

I have obtained a copy of a report that highlights the modifications made by the JEA to the Palestinian textbooks that have been used since the signing of the Oslo Peace Accords in 1993. The report lists most of the changes made to textbooks used from first to tenth grade.

1. The logo of the Palestinian Authority that has been printed on all book covers has been removed and replaced with the logo of Jerusalem Municipality.

2.  In the censored textbooks, every mention and picture of a Palestinian flag has been removed, even in the coloring books for six-year olds.

3. Also in the first grade textbooks, a story about a female prisoner returning home, and a poem about the “dawn of freedom” were deleted from the censored versions.

4. All mention of the terms Nakba (meaning “catastrophe,” referring to Palestinian dispersion/exodus in 1948) and Palestinian right of return have been removed, including poems by exiled Palestinian poets expressing their longing for their beautiful homeland. Poems and songs about the beauty of Palestinian landscapes or poems that mention Israeli checkpoints have also been deleted.

5. Earlier history – from hundreds of years ago – is being equally censored. In the fourth-grade textbook, a story about Saladin and the Battle of Hattin was deleted from existence for no apparent reason. Similarly a story about the Siege of Acre during the Napoleonic invasion has been deleted.

7. Any mention of Israel as an occupying force or East Jerusalem as an occupied city have been removed. This aims to assert Israeli control over occupied Palestinian lands behind the 1967 armistice lines. Furthermore, Palestinians inside Israel are not referred to as Palestinians anymore, anywhere.

8. Stories, songs, and poems about of the first and second Palestinian uprisings have all been deleted. Here is a sample the report cites from a deleted song that the JEA accuses of inciting to violence, translated: “Jerusalem is waiting for the dark occupation to wither away and for the bright day of freedom to arrive.” This is the only part of the song cited in the report.

9. In the geography textbooks of eight-grade students, the issue of pollution in the Palestinian environment addresses the waste sewage water dumped by settlements in the West Bank onto Palestinian villages; this whole lesson has been deleted. Also in all geography textbooks, facts about the Palestinian water crisis – such as in the Jordan Valley where roughly 8,000 settlers receive 20 times more water than almost 2.5 million Palestinians living in the West Bank – are entirely deleted, in the newly censored textbooks.

10. In ninth and tenth grade history textbooks, almost the whole book has been deleted. Whole units that address the Palestinian issue from the time of the Balfour declaration (1917) until the Nakba (1948) have been deleted, leaving blank white pages for students to stare at. 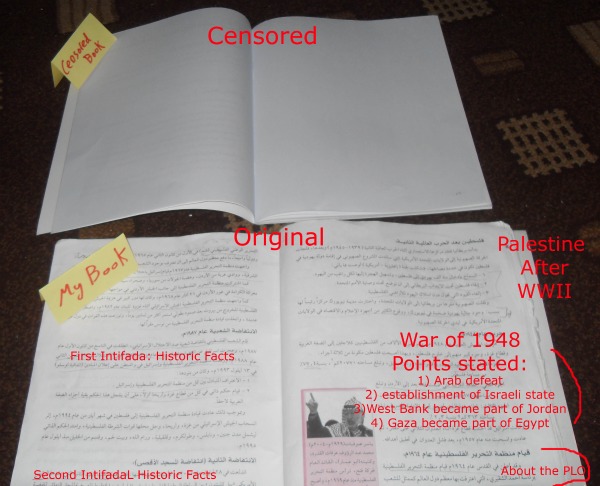 David Ben-Gurion once said in a conversation with Nahum Goldman: “That is natural: we have taken their country […] Why should they accept that? They may perhaps forget in one or two generations’ time, but for the moment there is no chance.”

We have not forgotten, and we will never be forced to forget.

This issue is dangerous beyond description, and such illegal acts must not be allowed to pass unnoticed. People must act quickly and support the schools that have refused to deal with such misleading textbooks. The JEA has now threatened to cut funding to those schools, which are in need of support.

Everyone has the right to preserve his or her identity, heritage and history. All people have the right to receive proper education at schools they attend; no one deserves to receive censored, politicized propaganda that aims to control the minds of young people in any way. We will not be forced to forget nor will we be forced into ignorance about our own identity.