Israeli police estimate that there are hundreds of thousands of illegal guns among Palestinian citizens of Israel, a community suffering from under-policing and high levels of violence. Are the guns the problem? And what can be done about it? 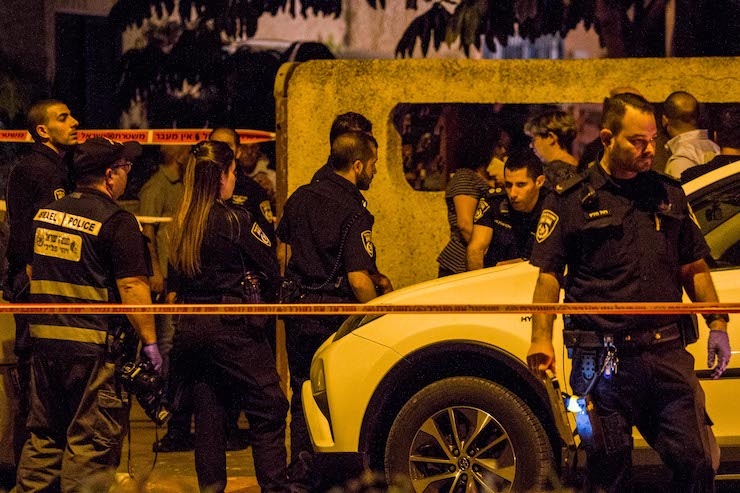 The Palestinian community in Israel has been experiencing an ongoing wave of violence for some years now. In the past week alone, seven people were killed in Kafr Qasim, Acre, Jaffa, and Lyd. The killings tend to rob Palestinians in Israel their sense of personal security, and guns have become so pervasive, that at times it feels like anyone could be the next victim.

“When you see that 70 Arabs get killed every year on average, of which 15-20 are women, you can’t help but feel depressed,” said Meissa Irshaid, an attorney with the Gun-Free Kitchen Tables Campaign, a coalition of women’s organizations working to eliminate gun violence.

The organization has been researching the sources of guns in the Palestinian community in Israel. What they found is that most illegal firearms in Israel are actually registered to the army. According to Public Security Minister Gilad Erdan, 90 percent of illegal firearms in the north of Israel can be traced back to the military.

Gun Free Kitchen Tables started keeping track of the numbers of firearms in public spaces, and whether they are monitored by authorities. First, they researched how many legal firearms are registered. In the process, they discovered that law enforcement authorities don’t have accurate numbers, only estimations.

“The Department of Firearm Licensing at the Public Security Ministry is responsible for firearm registration, but they couldn’t provide accurate data. So we started conducting meticulous research ourselves,” explained Irshaid.

“We found several internal contradictions and gaps in the data provided by the various authorities. If law enforcement can’t keep track of how many firearms are circulating, imagine what’s going on out there illegally,” she added.

What has caused the recent spike in murders?

“This wasn’t the case 10 years ago, which proves that what they say about the Palestinian community, that we are inherently violent, is simply not true,” she continued. “One of the central causes is the meteoric rise in the number of firearms in the Arab community. Nothing else has changed as significantly as that.”

“It’s not just about the people who end up dead — nobody in the media talks about those who are injured,” she added. “This is where the real problem lies. Thousands of people are injured, many of whom become disabled for life. Thousands more live under the constant threat of violence. When you consider that there are 2 million Palestinian citizens of Israel, the numbers are even more concerning.”

I have a feeling the authorities know exactly where they can find these guns.

“The problem is that Israeli authorities treat violence in our community as an internal Arab problem. All it would take is a single gunshot in a Jewish neighborhood of Tel Aviv and police would do everything in their power to find the perpetrator. The state is directly responsible for the violence. To deal with any phenomenon, the authorities usually map out the problem. The fact that they don’t know how many firearms are out there indicates that they haven’t taken any significant steps to deal with the issue.”

It sounds like the army and the police are arming whoever they want in the Arab community.

“The police claim that they don’t have any control over the army warehouses, which means they are combating the symptom, not the root of the problem. There may not be coordination between the army and the police, but you’re right. For example, we know about a case in Jaffa where police confiscated a gun that was found at a crime scene and shortly afterward the same gun appeared at a different crime scene. What does this tell you?”

Based on the organization’s research, in addition to weapons stolen from the army, the primary sources of weapons in the Arab community in Israel are those smuggled from Jordan, guns that were once legally licensed in Israel, and guns that were manufactured in the occupied territories.

As of 2013, there were 14,000 licensed firearms whose owners either died or left the country. Their firearms were not collected by law enforcement, said Irshaid, adding that it only makes sense those firearms would be sold or stolen.

What solutions do you propose?

“The government is promoting an 80-page bill to regulate registered firearms in Israel. But what about illegal guns? What we’re proposing is supervision of licensed and legal firearms, including those held by the military and police. There is a very strong connection between security companies, for example, and organized crime in Palestinian society. Why not monitor Arab security companies who we know buy firearms and sell them to criminals?”

“For the 400,000 [illegal] firearms that are already out there, we suggest that law enforcement launch a program for gun owners to turn in their firearms with immunity. In other parts of the world those types of programs go on for six months. In Israel police carried out such an operation for one week and only one gun was turned in. You have to motivate people to cooperate with the police.”

“A third solution is a buyback, where the state re-purchases the firearms”

Not everyone agrees with Irshaid’s analysis, however.

“Many people blame the police,” explained Professor Mona Khoury-Kassabri, dean of the School of Social Work and Social Welfare at the Hebrew University of Jerusalem. “I agree that they have to change their policies and that they’re not doing enough. But I don’t think the prevalence of firearms is the main cause: it’s a catalyst but not a cause. Even if you sleep with a gun under your bed, if you’re not a violent person; you won’t necessarily use it. What we have here is a community that has internalized violence as a solution.”

“Violence begins with personality traits. Some people naturally tend to be violent. After that, other factors come in, like family, education, and what we call contextual characteristics  — when you live with violence around you, you internalize these values and methods of problem solving. We don’t have the appropriate systems in place to contain the problem of violence in our community, or to deal with the generational divides.”

What do you mean by generational divides?

“I mean the process of modernization and liberalization that our youth is experiencing. This gap between a child and their parent can also lead to violence.”

It feels like there is a difference in the extreme violence we’re witnessing lately. In the past, it used to be more random. Over the past few years, it has become more targeted, and there’s a sense that there are professional assassins walking around.

“Here I agree with you, that the problem of firearms plays a role. But again, the central problem in my view is the fact that we’re solving problems with violence. Why are we doing that? Because, among other things, we have lost our faith in the system and the authorities.”

Yet Khoury criticizes the Palestinian community before blaming the police: “If we don’t solve our problem as a community, which is adopting violence, then the cycle of violence will go on.”

What are we supposed to do, then?

“Fight violence all the time, not just by attending protests. We have to change social perceptions and chauvinistic and masculine values — they are the primary factors contributing to the increase in violence. And by the way, in contrast to what people think, religion is not a factor in increased incidents of violence.”

Khoury researched the correlation between religion and violence in the Arab community and found that teenagers in religious Muslims and Christian communities were involved in fewer acts of violence compared to their secular counterparts.

“Religious values are a positive influence,” says Khoury. “I’m not saying whoever is secular has to become religious now, but it’s worth understanding what children are being taught in these communities. This is true not only in Muslim and Christian communities, but throughout the entire world, including religious Jewish communities.”