Three months ago, Interior Minister Eli Yishai deported several hundred families from Israel to South Sudan, despite unequivocal statements by human rights group that mere fact of the established state is far from the offering the safety that would allow for these families’ return; the request was at least to extend the group exemption from deportation – Israel’s mechanism of neither denying nor granting asylum – a few months longer. Even that demand was ignored. The deportees’ baggage, all 14 tons of it, was delayed for two months and kept at a warehouse in Israel, simply because the state felt that it could not be bothered to bear the expenses of sending it along. In the baggage was medicine collected for the families by Israeli volunteers from Israeli donors; it was only finally sent to South Sudan a week or so ago, but not before reports began to surface which claimed that immigration officials were helping themselves to the more precious possessions from the pile.

Dwell with me on that image for a second: Families herded into a transport which will take them to the very danger they were running from, leaving a silent pile of suitcases and clothes behind.

Within a week, the deportee children – Israeli children, either born or raised in Israel, speaking better Hebrew than most of this government’s apologists in the United States – began to die. So far, at least seven of them have succumbed to disease. Over the weekend, one of the volunteers helping the asylum seekers, Moran Mekamel, published the following photo and story on her Facebook wall: 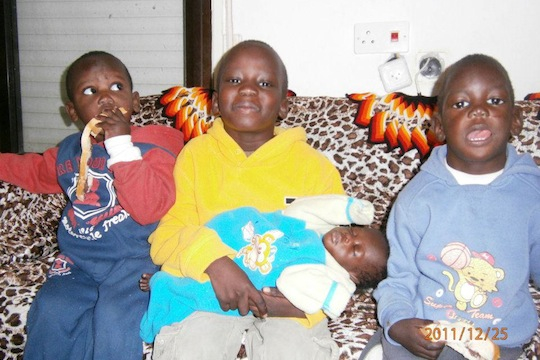 “I’m out of words, I’m sitting and writing and erasing and writing and erasing again…
The picture shows the children of Michael and Niakor – a lovely couple deported together with their kids. On the right is Noah, next to him is Mahm, the eldest, holding little Nian, and on far left is Sunday.
Nian they lost already a month ago. He was born prematurely, and his little body couldn’t fight the malaria for long. Over the weekend I got the news that Noah died as well. Noah was born with a defective heart. He was operated upon a year ago at an Israeli hospital and was receiving medical treatment. Michael would run with him from one medical test to another, spending long days in hospitals. When the preparations toward deportation began, the family filed a request to stay a little longer, until Noah stabilises and his chances of survival improve. Their work permit was taken away from them, the money ran out, and the family could no longer sustain itself, with dignity or without it. This is what they call in Israel “voluntary departure”.
They found out their deportation date at a 24 hours’ notice, so there wasn’t much time to organise. The night before they left I went to see them, together with a wonderful woman from Arad. She had gathered many medicines and asked me who she should give them to; it was clear to me we should take them to Michael. I climbed to their upper-story flat and was stunned to see them pack by candle-light: the electricity was cut off already a month before. Michael was packing and I was watching the three elder kids to make sure they don’t burn anything or eat the medicines I brought, which to them looked like candy. They flew the next day. Every parting is painful. This parting was horrifying – they were flying to a country that was only just established and lacked any ability to treat complex medical cases.
Here we are today, three months later, and within the last month alone, these two parents lost two children, and the two remaining ones are sick as well. Sunday is already in hospital with malaria, in serious condition, and Mahm is sick at home. “I’ve only two children left,” Michael told me today over the phone.
The family doesn’t have money to properly treat their remaining children. The hospitals are at full capacity and more people leave them in shrouds than on their own two feet. I ask you, beg of you to help me scream the story of these children and their fate, dictated by the heartless, immoral Israeli government.
I intend to raise money for this family. Michael’s voice echoes in my head: “I must save my children,” he told me. And I promised to help. You can reach me on students4refugees@gmail.com.”

On a systemic level, the deaths of these children is the product of Israel’s immigration policy – one of the narrowest, most rigid policies of its kind in any loosely democratic country. On a cultural level, their death and the public complacency over the deportation which lead to it to produce a culture of fear, that conflates absolute hegemony with survival, and makes adult human beings think that a family like this actually poses a risk to the future of this country.

But there is also personal responsibility involved here: Yishai used his power of discretion to order the deportation of these children. I’m finding it difficult to point to any reason but populism: There was no law obliging him to deport them, nor a pressing financial need to do so. Israel, which prides itself so much on its relatively robust economic situation, could well have tolerated several hundred families, most of them with working or able parents, and even to take care of the few, like the late Noah and Nian, who needed medical attention. And at any rate, the economic side of their predicament hardly came into play.

I have no idea how to stop him, except to voice support for fellow Israelis who already vowed to hide children from immigration police, even in blatant violation of the law. The least I can do is to encourage you to help Moran buy medicines for the surviving children of this one family. It will not change the policy and won’t matter “in the grand scheme of things,” but it would make all the difference in the world to them.