Israeli authorities have demolished more Palestinian homes in the occupied West Bank thus far in 2016 than in any other calendar year in the last decade. 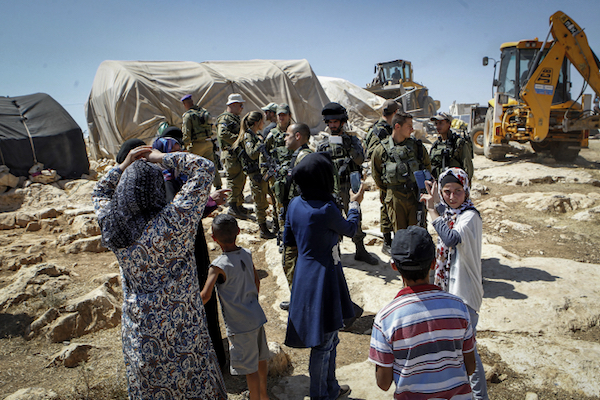 Israeli authorities destroyed 33 structures, 20 of them homes, across the West Bank since the beginning of August. The demolitions have left 53 people, including 25 minors, homeless, according to Israeli human rights group B’Tselem.

The demolitions began on August 4th in the Al-Mu’arrajat community in the Jordan Valley, where four homes were destroyed and 14 people were left homeless. On August 8 authorities bulldozed two homes in the village Fasayil in the Jordan Valley, leaving 12 people without shelter. On August 9 authorities demolished five homes, leaving 27 people homeless, in the Um al-Kheir community, located in the South Hebron Hills.

Israeli authorities have demolished more Palestinian homes in the occupied West Bank thus far in 2016 than in any other calendar year in the last decade. As my colleague Natasha Roth previously pointed out, Israel justifies administrative demolitions by arguing that the structures in question have been built without a permit.

All homes and structures demolished by Israel were located in Area C of the West Bank, which is under both Israeli civil and military control. The Palestinians as well as the international community consider the area to be part of a future Palestinian state. Israel, on the other hand, wants Area C, where the settlements are located, to remain in its hands.

However, it is nearly impossible for Palestinians in Area C to obtain building permits: between 2010 and 2014 the army’s Civil Administration granted just 1.5 percent of requests. The IDF recently admitted that when it comes to demolitions in the West Bank, “enforcement against Palestinians is hundreds of percentage points higher [than against Jews].”

The demolitions come on the backdrop of increasing pressure and condemnation against Israel for its home demolition policies. Just last month, European Union ambassador to Israel Lars Faaborg-Andersen slammed Israel for destroying Palestinian homes in Area C. Last week U.S. officials warned the Obama administration would respond harshly should Israel demolish the West Bank village of Susya —  which has been under threat of imminent demolition for several years — and that it was “troubled” by Israel’s “provocative” razing of three EU-funded shelters in the West Bank.

Since 2006, B’Tselem reports, Israel has destroyed at least 1,146 Palestinian homes in the West Bank, not including punitive home demolitions. As a result, at least 6,000 Palestinians have been displaced, around half of whom are minors.