Israeli security forces shoot two small Palestinian children with ‘less lethal’ bullets — one in the head, one in the thigh. The Israeli media barely notices.

A five year old. An armed, uniformed Israeli pointed a gun at him. And shot. A kid not even old enough for first grade. I haven’t seen any reports on this in English and the few I saw in Hebrew were scant and focused primarily on the incendiary, racist comments posted by Israelis on the photo of Abu Ali that went around Facebook. Things like, “too bad they didn’t take him out,” and, “if the soldier had pointed his gun a little more in the center, no more sluts like him would be brought into the world.” 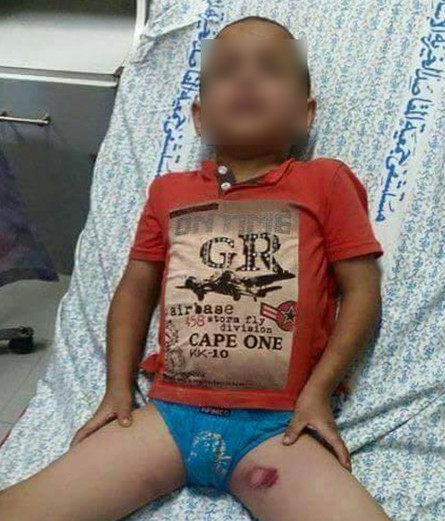 Abed Al Rahman Abu Ali, 5, in hospital after being shot by Israeli forces

But we don’t need a photo of an injured Palestinian child on social media to know that there are Israeli racists who love to make seditious comments about Palestinians on Facebook. The little media that did cover it didn’t even ask the most basic question: Why are Israeli forces shooting at five year olds? Who is the officer and who is the commander and will they be held accountable? And where is the outrage by politicians?

According to a Hebrew report in Haaretz, it was a sponge-tipped bullet shot by Israeli police officers, in contravention to the department’s own policy, which forbids shooting sponge-tipped bullets at senior citizens, pregnant women and children. In recent years, dozens of Palestinians have been seriously injured by sponge-tipped bullets, several losing eyes, fracturing faces and arms and one child, Mahmoud Sunukrut, was even killed.

Israeli authorities claim he was throwing stones. Indeed, it is very possible that he was. Issawiya is a neighborhood right at the foot of Mt. Scopus, where Hebrew University is located. It is the scene of constant military closures, demolitions, raids and harassment, and many times young Palestinian residents throw stones at Israeli forces. As an almost default, Israel blocks off two of the three main access roads to the village with barricades, making it extremely difficult to enter and exit the neighborhood.

It could be that because neither child was seriously injured the media didn’t think the two shootings deserved more attention. And it is clear that many Israelis, both in government and in the public, think throwing a stone merits being shot. Regardless, this story is a horrible reminder of just how far Israelis have come in their dehumanization and desensitization of Palestinians, that a five year old and a three year old being shot is a non story.