Israeli society is finally beginning to understand the importance of Ramadan to the Muslim population. Just don’t be afraid of us as we invade your cities this weekend, okay? 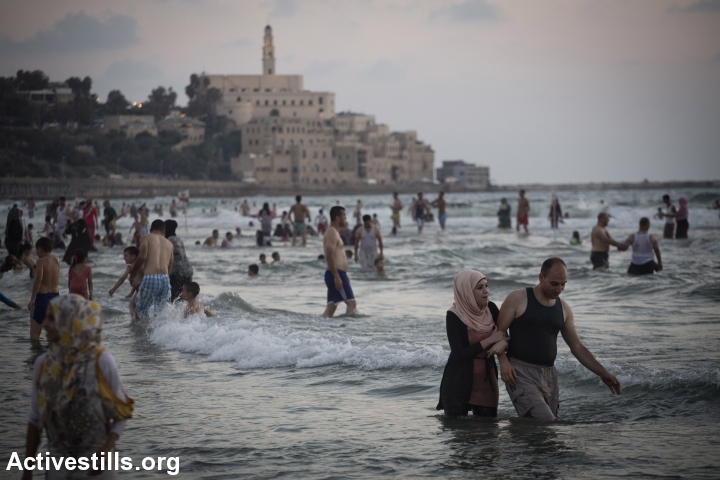 That’s it, Ramadan is over. Thirty brutal summer days have passed. We ate all that was forbidden at night, and the celebrations and carbohydrates are nearing their end.

Eid al-Fitr, which marks the end of the month-long fast, is before us. Many call this the “small” holiday, because it lasts only three days and does not have its own “eve,” as opposed to Eid al-Adha, the “big” holiday, which lasts five whole days.

We do not know exactly when we will celebrate Eid al-Fitr until the last moment of that night. Yes, as romantic Muslims we celebrate according to the moon.

These are the two holidays that Muslims know for certain of their existence; and it is our duty as Muslims to celebrate and take advantage of them to the fullest extent. This means that 1.5 billion Muslims will be celebrating at the exact same time. With that kind of positive energy, who needs to worry about nuclear energy? But unfortunately, with all the tragedies, wars an tensions in the Arab world, the only people celebrating are the arms dealers, and those who supply them.

In this country nearly a million Muslims will be going on holiday. Therefore I thought it prudent to calm the Jewish People’s survival instinct and prepare them psychologically for what is about to happen: this weekend will see a significant increase of Arabs in the public sphere, in parks, venues, and Jewish cities. But don’t worry, there is no need for defense mechanisms; this wave of celebratory Arabs will pass in three days and everything will go back to normal.

Leisure in the shadow of a crisis

Families and young men (who will likely smell strongly of cologne) will be walking around, dressed in new clothes and with credit cards in tow, looking for new places to hang out in. Please don’t freak out.

Since Nazareth has exhausted itself in terms of tourism and as the authentic Arab city, especially for Arabs, the number of cities viewed as tourist attractions among Arabs dwindles significantly. Instead, Arabs head to the malls, public pools, or dilapidated theme parks.

Think about a city like Taybe or Tira. What can thousands of celebrating Muslims do there aside from go to the parks, malls, cafes and movie theaters in the neighboring towns of Kfar Saba, Ra’anana or Netanya? In the Galilee, for instance, the main attraction is nature, which means it is possible to barbecue at a public park, where there is some shade and water. A kids area in a forest built with the money of an anonymous donor to the Jewish National Fund would be a nice bonus. 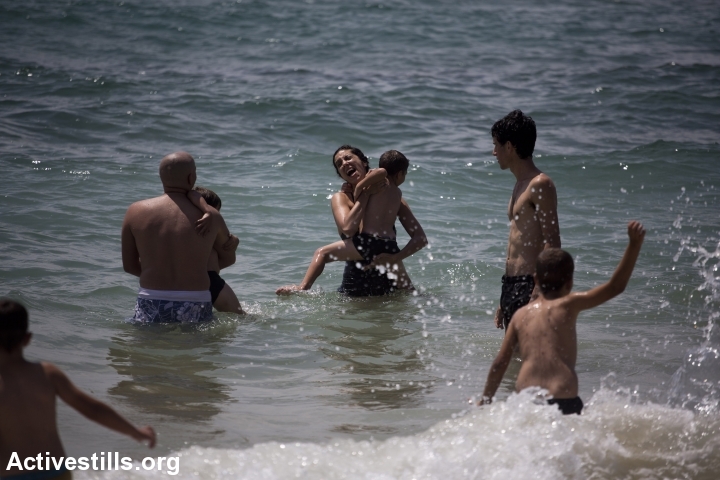 Israeli and Palestinian activists play in the water with Palestinian kids from the West Bank village of Nabi Saleh, at the beach in Jaffa during the holy month of Ramadan, August 4, 2013. (photo: Oren Ziv/Activestills.org)

In the shadow of poverty, a housing crisis, and faltering public infrastructure in Arab villages, the issue of leisure culture is pushed to the side, and has not been properly dealt with for years. Few wealthy families can allow themselves to travel abroad, usually to Egypt or Jordan, but most of the Palestinian population will look for a place inside the country to celebrate. I must advise you against traveling to certain cities, unless, of course, you feel the need to save a Jewish life, or you’re just over the intimacy of your family’s home after traveling for hours in the car with the kids. Try to avoid the old city of Akka (Acre), Tabariyyah (Tiberias), Yaffa (Jaffa) or Haifa.

My feeling is that Israeli society has finally begun to speak about the importance of Ramadan to the Muslim population. Lately I have encountered more and more people who understand the significance of this month holds for Muslims, both culturally and spiritually.

After speaking to the media about Ramadan at every opportunity; after opening our tables and hearts by hosting Jewish guests whenever we could; after watching the new Egyptian television series “Harat Al-Yahud,” which looks at the lives of Muslims, Jews and Christians in Cairo before 1948; after we gave our financial support to the national food chain and enjoyed the specials catering to the purchasing power of Israel’s Arab citizens; after all that, if you haven’t changed your preconceived notions that Arabs only like good food and generous accommodation, and you still view as a violent, life-hating nation, there is probably not much that we can do.

Here’s the deal: we are going to be sharing this country for a long time, and we would be happy to end this month on a nice, relaxed note; without violence, racism, aggression, hostility or disturbing photos on Facebook. Let us pray for the day in which we learn how to live and let live for the others who live on this land.