Israeli Jewish liberals are focused on social and cultural identity, look away from Israel and towards the west, do not have alliances with economically disadvantaged groups, are sympathetic towards the military, and prefer to exercise influence through non-electoral channels.

In my previous post, I argued that Israeli liberals are not the right audience for anti-occupation activists. In order to explain my argument, I must first clarify what I mean by liberals, and how do I see their position in Israeli society.

Israel’s liberals share some attributes with liberals in other countries, but also differ from them in significant ways. Here, liberalism is more of a cultural identity and social attitude than a political ideology. Its components include, by and large: secularism, tolerance on issues of sexuality and lifestyle, and a strong emphasis on individual rights and personal freedom.

Cosmopolitanism is a common trait among liberals everywhere, but in Israel it is their most dominant attribute. To some extent, it might actually be more accurate to call them cosmopolitans than liberals (or in Bernard Avishai’s terms: “Global Israel”).  Israeli liberals strongly identify with the West, which is the main producer of the culture that they consume (as the picture below demonstrates). More than anything else, they want to be, and to feel, a part of it. 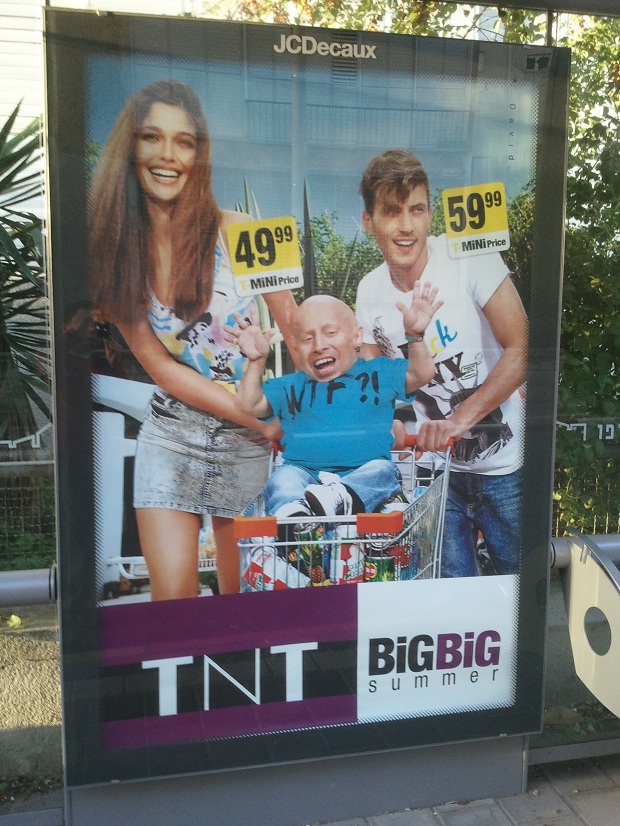 A random ad in central Tel Aviv, with not a single Hebrew word or cultural reference, shows that the true home of many city residents is abroad (Photo Credit: Roi Maor)

Ironically, it is this very desire which drives Israeli liberals to a different position from that of their counterparts in the West, and especially the US. Although Israel’s liberals pay lip service to issues such as anti-racism, feminism and economic justice, these are generally not topics which engage and mobilize them. Seriously addressing these issues requires them to work with groups which remind them of how non-Western Israel really is.

Although there are many Palestinian liberals, these are not the people to whom Avishai and Goldberg are referring. Israeli Jewish liberals have generally stirred clear from alliances with Palestinians. To some extent, this reflects the feeling that ethnic strife in Israel is an issue which threatens each group’s survival, and therefore one must choose sides. That is not typical of racial tensions in the US and Western Europe in recent decades.

But the feeling that Palestinians represent the Orient, whereas Jewish Israeli liberals aspire to be part of the occident, is also quite significant. And it is certainly the most important explanation for liberals’ alienation from Sephardic Jews, who immigrated to Israel from North Africa and Middle Eastern countries.

Even feminist groups and labor unions, which are strongly allied with social liberals in the US, are not in coalition with Israel’s liberals. Mainly, this is a reflection of the weakness of these groups, which were largely coopted into the establishment, but the end result is a significantly narrower version of liberalism.

Unlike American liberals, which were strongly involved in the anti-war movement during the Vietnam era, and more recently around Iraq, Israel’s Jewish liberals have shown a much weaker anti-militaristic sentiment, with the possible exception of the first Lebanon war in the 198os. Even then, draft dodging was mostly out of the question. Like other Jewish Israelis, liberals must serve in the IDF for three years, and this experience, combined with the sense of existential threat mentioned above, makes them much less suspicious of hawkish policies.

Liberals’ greatest animosity is directed at the ultra-orthodox, which is not surprising given both groups’ obsession with social and cultural issues, and their differing views on personal freedom (liberals: pro, ultra-orthodox: con). This clash has several consequences. First, it highlights liberals’ identification with the IDF, because the struggle over freedom from religious coercion is often mixed with resentment over the fact that the ultra-orthodox are exempted from military service. Second, liberals are less sympathetic to the problem of poverty because the ultra-orthodox are one of the poorest groups in Israel.

Third, the high visibility of the ultra-orthodox drives liberals away from areas into which this ever-expanding population moves. Liberals are increasingly scarce in Jerusalem, and are ever more self-segregated to the metropolitan areas of Tel Aviv and Haifa. This increases their isolation from broad swathes of Israeli society.

Since they are not part of a broader popular coalition, liberals in Israel gain their (substantial) influence through non-electoral channels. They are strongly represented and often use the legal system, professional societies, the government bureaucracy, businesses, the media, and international connections. These tools are also widely used by social liberals in the US, but they usually supplement these channels with popular mobilization, and this is not the case in Israel.

So, Israeli Jewish liberals are focused on social and cultural identity, look away from Israel and towards the west, do not have alliances with economically disadvantaged groups, are sympathetic towards the military, and prefer to exercise influence through non-electoral channels. Therefore, it seems quite surprising, on the surface, that the vast majority of liberals in Israel (though not all of them) identify with the left and the peace camp.

This seeming contradiction is, in fact, a mirage. Israeli liberals have a definition of peace, and reasons for supporting it, which have everything to do with their desire to detach from the Orient, and little to do with any sympathy towards the Palestinians. In the next post in this series, I will look into their thinking on this issue and their position vis-à-vis the occupation.