Faced with a power shortage for Israelis, the environment minister offers to cut the life-saving power Israel is selling to Gaza strip.

Israel’s minister of environmental protection, Gilad Erdan (Likud), has demanded that the government stop supplying power to the Gaza Strip in order to prevent power failure in Israeli cities this summer. In an official letter addressed to all government ministers (below), Erdan notes that 4.5 percent of Israel’s power supply is sold to Gaza.

Erdan writes (emphasis in the original):

The State of Israel is preparing itself for a power shortage during the summer of 2012. In order to continue the steady supply of power, we [the government] are presented with a decision which details measures for the prevention of a power shortage. Before the government discusses this option, I ask you to add a condition which states that prior to placing any limit on the power supply to Israeli citizens, power supply to all foreign elements will stop, most notably to the terror authority of Hamas in Gaza.

The collapse of the natural gas agreement between Egypt and Israel will probably lead to a power shortage in Israel – a temporary problem, which can be solved when Israel begins using its own huge natural gas resources in 2013. As a result, Israelis are likely to suffer a few hours of power shortage at the peak of this summer’s heat.

The 1.5 million Palestinians in Gaza already suffer 12 hours of blackout a day on average. Israel bombed the Gaza power plant in 2006, and didn’t allow in the necessary materials needed for the reconstruction since. As a result, even Israel’s own Supreme Court recognized in 2007 that the survival of the people in Gaza depends on the Israeli power supply. Israel has declared before the court that power supply to the Strip would not be stopped.

According to the non-profit organization Gisha, the Israeli supply accounts for 35 percent of the power Gazans use. Due to the fuel shortage in the Strip, using power generators is also limited, and critical medical supplies is lost every year due to lack of proper storage conditions.

Israel’s minister of environmental protection, a senior member of Prime Minister Benjamin Netanyahu’s government, is now asking to leave 1.5 million people without the little they need to survive, so that Israeli citizens can enjoy their air-conditioning undisturbed this August. 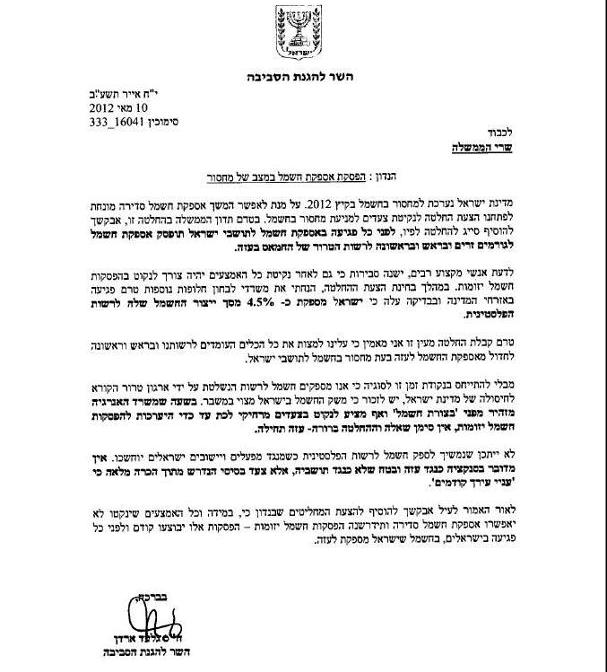