CORRECTION: Due to a serious miscommunication, I mistakenly reported that the ARDC had moved to Jerusalem. Nic Schlagman of the ARDC confirms that the ARDC  did lose a lease due to the religious edict mentioned below and that the organization has had “a lot of problems trying to relocate our shelters for the same reason.” They have not, however, moved to Jerusalem; their offices are currently closed for a week as they move to Tel Aviv’s Central Bus Station.

My deepest apologies for the error.

I met with Yohannes Bayu yesterday, the founder and director of the African Refugee Development Center, an local NGO that aims to assist the 30,000-45,000 asylum seekers in Israel. I’d been accustomed to meeting at the ARDC’s office in South Tel Aviv, the heart of Israel’s foreign community. But, yesterday, we met at a coffee shop in Jerusalem as the ARDC is currently moving. And, due to racism, the ARDC lost a lease they’d signed for a new Tel Aviv office. 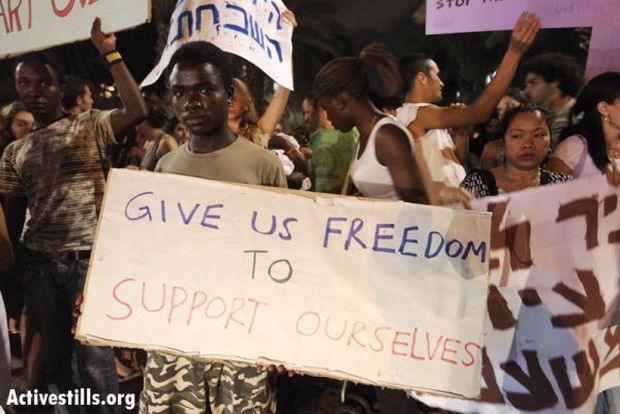 An African refugee at a protest in 2009 (photo: flickr/Activestills)

In July of 2010, 25 South Tel Aviv rabbis signed the “Edict Forbidding the Rental of Apartments to Infiltrators,” forbidding Jewish Israelis from renting to undocumented migrant workers and African refugees–a group the government and now the public refer to as “infiltrators.”

After the ARDC decided to lower overhead costs, they began looking for a new office. They found one in South Tel Aviv, signed the lease, and packed up–only to have the landlord back out at the last minute. Bayu understood from the landlord that the cancellation was related to the religious edict and the racism in the neighborhood. “He said, ‘I’m sorry, but I can’t rent to you [and your organization],'” Bayu, a Christian Ethiopian, recalls.

Since the 2010 edict, a number of refugees in South Tel Aviv have reportedly seen their leases cancelled or have encountered landlords that refuse to rent to them. Several right-wing demonstrations against African asylum seekers have been held in the area in the past year and a half. The most recent took place earlier this month and was led by Israeli settlers from the West Bank and East Jerusalem, including Knesset Member Michael Ben Ari (National Union) and extreme right-wing activist Baruch Marzel, a former member of the outlawed Kach party.

According to Bayu, the state of Israel has recognized less than 200 refugees since 1948. Bayu is among them.

The first African refugees arrived in Israel in the late 1980s and early 1990s. A slow trickle of asylum seekers continued since then but the pace stepped up dramatically and visibly in the mid-2000s due to the conflict in Sudan. While Israel does not process refugees request for asylum, nor does it give the group work visas, the state tacitly acknowledges their status by not deporting them.