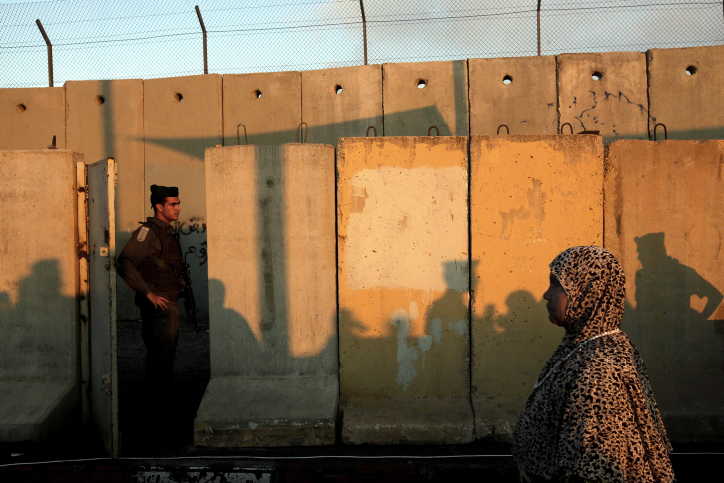 A Muslim Palestinian worshipper headed to the Al-Aqsa compound in Jerusalem walks by an Israeli soldier as she crosses the Qalandia checkpoint on August 05, 2011 (Miriam Alster/ Flash90).

Support for a two-state solution is at the lowest level among both Israelis and Palestinians in almost two decades, according to a public opinion poll published on Monday.

The poll, conducted in June and July among representative samples of 2,150 Palestinians in the West Bank and Gaza, and 1,600 Israelis, was a follow-up survey to several previous studies conducted by Dr. Khalil Shikaki and Walid Ladadwa from the Palestinian Center for Policy and Survey Research (PSR) in Ramallah, along with Israeli pollster and +972 Magazine writer Dr. Dahlia Scheindlin and the Tami Steinmetz Center for Peace Research (TSC).

Support for the two-state idea began to steadily decline more than 10 years ago, but first dropped below 50 percent for both populations last December, following Trump’s controversial announcement recognizing Jerusalem as the capital of Israel. In the six months since, backing for the two-state solution dropped three points each for both Palestinians and Jewish Israelis, from 46 percent to 43 percent.

The research also found that Palestinian citizens of Israel follow a separate trend, with stable and high backing for a two-state solution at 82 percent.

The research team attributed the declining support for two sates to perceived lack of feasibility and lack of trust. They found that 47 percent of Jewish Israelis and 56 percent of Palestinians believe the two-state solution is no longer viable due to extended settlement expansion. Meanwhile, Palestinian citizens of Israel are the most optimistic of the three, with 64 percent believing that two states remain a viable option. Large majorities on both sides ­– 72 percent of Palestinians and 81 percent of Jewish Israelis – do not expect a Palestinian state to be established in the next five years.

The portion of Jewish Israelis who do not support two states but opt for an alternative solution rose relative to December 2017: 19 percent, as opposed to 14 percent, support one equal state instead; and 15 percent, compared to 11 percent, prefer an apartheid-like situation of annexation without rights for Palestinians. Among Palestinians, the constituencies did not change significantly.