As a fundamental human desire and right, peace traverses time and context. However, if it is to be realized it must be adjusted to political and social realities.

In a period degraded by extremes of violence and dehumanization, the sight of 10,000 Israeli protestors taking to the streets of Tel Aviv last Saturday to protest against their own government’s actions in Gaza appeared as a welcome chink of light illuminating unremittingly bleak skies. Despite being smaller in scale, the demonstration recalled the early 1990s, when large numbers of Israelis demonstrated in favor of peace, and the possibility of a lasting peace seemed so much closer. 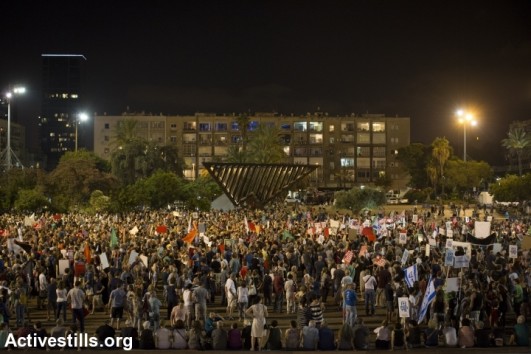 Israelis take part in a protest calling for peace negotiations between Israel and Palestinian, Tel Aviv, on August 16, 2014. Thousands of demonstrators gathered on Saturday for a pro-peace rally under the slogan: ‘Changing Direction: Toward Peace, Away From War.’ (photo: Activestills)

Watching images of the protests in Tel Aviv took me back to the First Intifada, a time when peace appeared as more than a fleeting abstraction or an illusionary delusion; a period when Women in Black attended silent vigils and commemorated Palestinian deaths across Israel; when B’Tselem first emerged to document the full range and scale of the Israeli state’s human rights abuses; when organizations as diverse and significant as Peace Now and Dai L’Kibush (End the Occupation) established the basis of a constituency for peace.

These groups brought Israelis and Palestinians together and proactively engaged in a whole range of solidarity actions. I personally worked alongside Israelis in establishing solidarity groups and organizing demonstrations, sit-ins, workshops, seminars and lectures. These actions were not confined to the occupied territories: They were deliberately aimed at the Israeli public, and were predicated upon a sincere belief that there was a body of public opinion that would be receptive and sympathetic to Palestinian concerns.

While our struggle against the occupation united Palestinians and Israelis it could not conceal deeper tensions, divisions and divergences. Insofar as ‘peace’ was invoked as a unifying abstraction, it was not examined in close perspective, or understood in terms of the demands that it imposed on its adherents. That this should be the case was hardly surprising – we were so busy working towards the goal that we did not concern ourselves with the exact details and clarifications.

In retrospect, while the struggle against the occupation united Palestinian and Israeli activists around a common goal, it could not conceal deeper questions; questions that required an honest and more substantive engagement than the slogans of ‘end the occupation’ and ‘two states for two people’ could ever provide. While we could agree on the broad sentiment, the details proved somewhat more difficult. Issues such as the right of return, the status of Jerusalem, the full removal of settlements, and the political significance of the 1967 borders remained fundamentally unaddressed, let alone resolved. 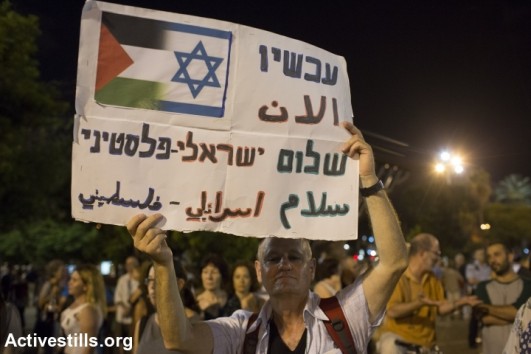 Israelis take part in a protest calling for peace negotiations between Israel and Palestinian, Tel Aviv, on August 16, 2014. Thousands of demonstrators gathered on Saturday for a pro-peace rally under the slogan: ‘Changing Direction: Toward Peace, Away From War.’ (photo: Activestills)

As with all political movements, participants joined the struggle in response to a range of motivations, whether personal or political in character. In some cases these motivations did not engage with Palestinian needs or requirements on even the most basic of levels. In precisely these terms, liberal Zionists could oppose the occupation upon the basis that it damaged Israel’s standing in world opinion or threatened the state’s long-term security interests. In other instances it became clear that some adherents to the cause – and those on the Left were by no means immune to this shortcoming – had internalized assumptions that were inimical to a lasting settlement: This meant that they could oppose the occupation but not necessarily address Palestinian rights or even Palestinians themselves.

It therefore shouldn’t have come as a surprise that subsequent years would give rise to a brutal and vicious irony: The same ‘peace’ we had fought for deepened and entrenched the occupation and became the means through which various forms of violence (both direct and indirect) were originated and perpetuated.

In making this observation I do not wish to minimize the sacrifices that were made, or to question the sincerity of those who joined us in our struggle. What I instead wish to do is clarify the conditions under which a meaningful and just peace can be established; to understand the process through which an abstracted invocation can assume material form. We have to come to terms with the fact that reality has now changed. 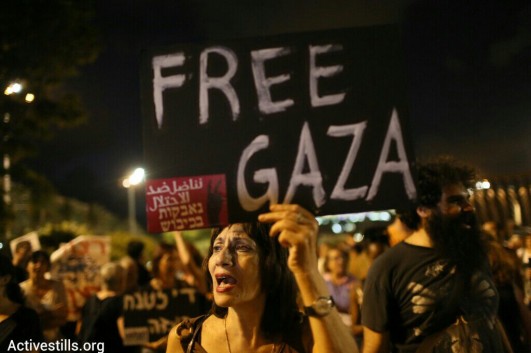 This is true of political realities both in Israel, where aggressive, rejectionist and militarist values have deeply corrupted both the political establishment and public opinion, and the occupied West Bank, where the settlement project has progressed to the extent that it changes the foundational assumptions of the two-state model. The two developments impose a fundamental paradox: On the one hand we are more divided than ever; on the other, the basis of a full separation appears increasingly inconceivable.

As a fundamental human desire and right, peace traverses time and context. However, if it is to be realized it must be adjusted to political and social realities. In other words, to call for ‘peace’ is relatively straightforward; to make the specific sacrifices that it demands is somewhat more difficult. As a precondition Israeli peace activism should begin from the proposition that ‘peace’ must be compatible with the fundamental rights and needs of the Palestinian people; anything less than this should not be confused with peace.

Related:
10,000 protest in Tel Aviv for a just peace, end to occupation
Despite police ban, hundreds of anti-war demonstrators march in Tel Aviv
‘No more deaths’: Thousands of Israelis protest the Gaza war