Israeli planes have been reported spraying herbicides over land inside the Gaza Strip on four occasions in 2017, including twice in the last two days.

Israeli planes sprayed herbicides inside the Gaza Strip for the second day running on Wednesday and the fourth time this year, according to local farmers and Israeli rights NGO Gisha. A video published on Wednesday, allegedly of the crop-dusting, shows a plane flying low and spraying over farmland.

Palestinians who reported the incident said that the planes had dusted near the Gaza border fence, and the Gaza Ministry of Agriculture is investigating the extent of the damage from the herbicides sprayed over the last two days. Around 840 acres of crops were damaged during the last round of spraying in January 2017, according to Gisha.

The dusting of Palestinian-owned farmland inside the Gaza Strip did not begin this year. As +972 reported at the time, Israeli planes sprayed herbicides over vegetation in Gaza for several consecutive days in December 2015, damaging over 400 acres of crops.

The IDF confirmed to +972 that it was responsible for spraying the farmland, but didn’t elaborate as to why, beyond the amorphous designation of “security operations.” A number of Palestinian farmers have since demanded compensation from the State of Israel for what they cite as nearly $3,000-worth of damage to their crops.

Israeli planes have returned to spray herbicides numerous times since the end of 2015. The government, meanwhile, has contradicted itself over the area it claims to have targeted: despite the IDF’s confirmation to +972, and later to Gisha, that it had sprayed herbicides inside the Gaza Strip, the Israeli Ministry of Defense later claimed in a court hearing on the issue that the work had been carried out by private companies — and only on Israeli territory. 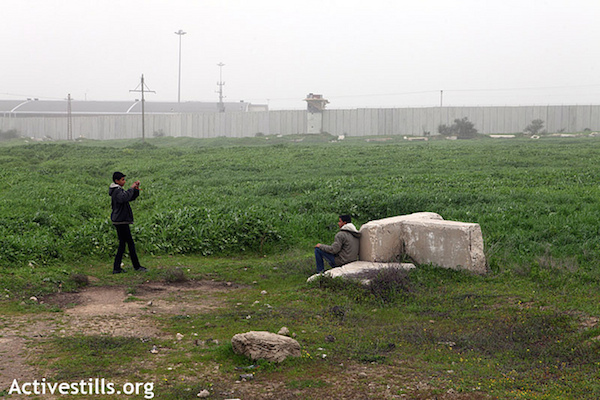 Palestinian children take pictures of each other in the no-go zone near Erez crossing, during the weekly demonstration against the occupation in Beit Hanoun, Gaza Strip, Tuesday, February 7, 2012. (Anne Paq/Activestills.org)

Since 2000, Israel has maintained a no-go area inside the Gaza border fence — formally referred to as the “Access-Restricted Area” (ARA) — which currently reaches 300 meters inside Gazan territory. The army enforces this buffer zone with everything from “less-lethal” weapons to live ammunition and tank fire, making it a particularly deadly stretch of land. Israeli bulldozers also reportedly enter the Gaza Strip on a regular basis to level land inside the ARA.

Farmers and scrap collectors who venture near the border are frequently targeted by Israeli sniper fire, including those who were apparently well outside the buffer zone. Most recently, a 15-year-old Palestinian, Yousef Shaaban Abu Athra, was killed when an IDF tank opened fire at him and two companions, who were wounded. The army claimed that the three had been acting suspiciously.

In addition to the land buffer zone, Israel restricts Palestinians to fishing within six nautical miles of the Gaza coast, and the navy regularly opens fire on fishermen who are deemed to have ventured further away from the shoreline.

This year marks a decade since the start of Israel’s siege on the Gaza Strip. Israel controls Gaza’s airspace and territorial waters, as well as all of its land crossings save for Rafah, which is controlled by Egypt and closed on all but the rarest of occasions. Gaza’s exports and imports are also controlled by Israel, as is the movement of people — residents and otherwise — in and out of the enclave.

At the time of writing, the IDF Spokesperson had yet to respond to a request for comment on the latest incident of crop-spraying. Should a response be received, it will be included here.