Journalist Raviv Drucker takes Israeli police to task for failing to keep the public informed about its investigation into the murder of Mohammed Abu Khdeir of Shuafat, in East Jerusalem.

The corpse of the 16-year-old Palestinian boy was discovered in the Jerusalem Forest three days ago, about an hour after CCTV cameras recorded his abduction from a quiet street near his home early in the morning.

Following an autopsy that was performed with a Palestinian forensic physician present, the Palestinian media published the shocking news that the boy had apparently been forced to drink gasoline and was then burned alive. But the police have not offered any updates regarding their progress toward finding the perpetrators. As a result, rumors are flying, the atmosphere of incitement is becoming increasingly dangerous and the Palestinian public increasingly suspicious.

The following is my translation (with permission) of Raviv Drucker’s Hebrew blog post. 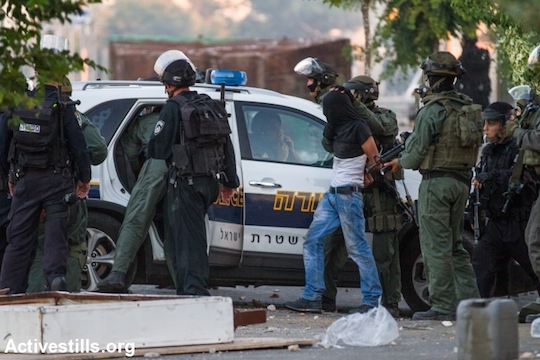 Israeli police arrest a protester during the second day of protests that followed the kidnapping and murder of a Palestinian teenager, East Jerusalem, July 3, 2014. (Photo by Faiz Abu Rmeleh/Activestills.org)

It’s really ridiculous that I have to write this. Doesn’t anyone in the police understand the basics of media relations? We have a politically loaded, very sensitive event. The Palestinians have grave suspicions about the investigation and conspiracy theories are spreading rapidly. Obviously, the smart thing would be to provide accurate information. To demonstrate that the police are investigating the case rigorously and care about keeping the public informed. Instead, the police are making a terrible mistake by refusing to release any information.

The truth cannot be worse than a news blackout.

A senior police officer should provide updates to the media, on camera, every few hours — preferably in Arabic. He should explain the investigative measures the police are taking and show that they are dealing with this matter with the utmost seriousness. There is no need to reveal details that might harm the investigation, but it is essential to answer the media’s questions and to be available after the press conference to put to rest rumors and conspiracy theories.

The Shin Bet (Israel Security Agency) made exactly the same mistake when it placed a gag order on the recording of kidnapped Israeli teen Gil-Ad Shaer’s phone call to the police. If everyone knew from the beginning that there were audible sounds of gunshots [after he said he’d been kidnapped], then the public would have been able to moderate their expectations. That doesn’t mean that the search for the boys should have been halted, but perhaps there would have been fewer mass prayer vigils and empty speeches predicated on the belief that the boys were still alive. And perhaps there would have been less pressure from the public for a heavy handed [military] response from our decision makers. Perhaps, too, the wave of ugly incitement would have been a bit smaller

But now the Shin Bet and the police are nurturing this illusion that it’s possible to manage current events without interacting with the public. And perhaps one day they will deign to tell us exactly what’s happening. Then of course they will be very angry indeed if we don’t immediately accept their version and dare to cast doubt on their findings.

Whatever the case, let’s suppose for the sake of argument that the most convenient finding for the Jewish public turns out to be true — i.e., that the murder really was committed by Palestinians. If the police were to announce in five days that this was the case, do you think anyone in Shuafat would believe them? And how many people will be injured before then, just because they’re convinced the police are covering up the truth?

Raviv Drucker hosts a political analysis magazine program on Israel’s Channel 10. He was a 2003 fellow at Harvard’s Nieman Foundation for Journalism.

Related:
A premier failure: Where is Israel’s leadership?
Kidnappings leave a wake of ‘revenge,’ racist violence
How the public was manipulated into believing the teens were alive