Police detained and held Razi Nabulsi, a young Palestinian from Haifa for a week for statuses he posted to Facebook and Twitter, claiming they constituted incitement. The catch? Even though the statuses were posted publicly on the Internet, police declared them to be secret evidence and refused to publicly say in court what he was accused of writing. 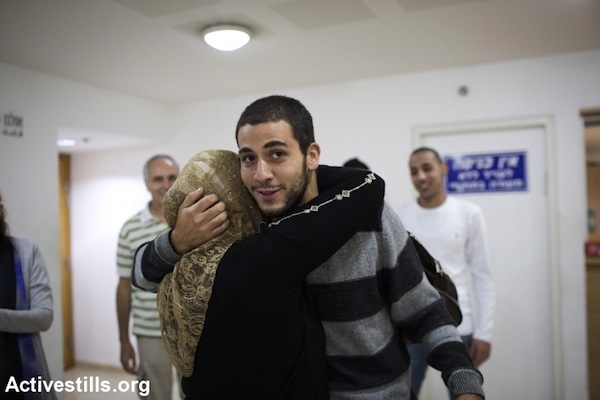 Razi Nabulsi, a 23-year-old activist and student in Haifa, spent the last week in jail for statuses he publicly posted on Facebook and Twitter.

His detention was extended twice. In four different court hearings during the week (two remand extension hearings and two appeals) the Haifa court decided that his statuses constitute a danger to the State of Israel. The court extended his remand to custody on the grounds of “incitement.”

Razi was represented by attorneys Aram Mahamid and Hassan Jabareen from Adalah – The Legal Center for Arab Minority Rights in Israel.

The materials the police submitted to the judge were, of course, “secret.” What we were able to understand from what police investigators said in court in response to the defense attorneys, was that the allegations were based on statuses Razi supposedly posted on Facebook and some leaflets that were distributed in the streets of Haifa. He was also accused of possessing books by the Palestinian writer Ghassan Kanafani.

Police freely admitted that Razi was not accused of any violence and clarified that they do not suspect that any other person committed any offense as a result of Razi’s “incitement.” Police also told the court that Razi participated in demonstrations, as if that’s a crime. 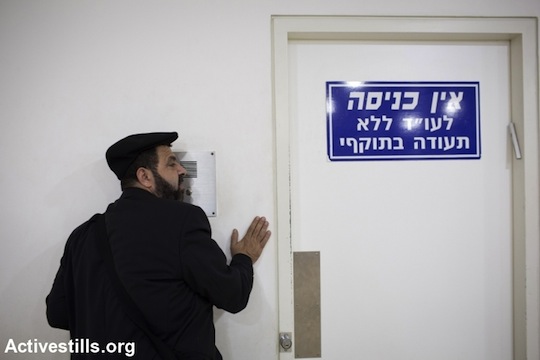 Attorney Hassan Jabareen speaks with a Prison Service officers through an intercom, to ask when his client, Razi Nabulsi, will be released, in Haifa court, October 16, 2013. (Photo: Oren Ziv/Activestills.org)

The weirdest thing about Razi’s ordeal was that, with the exception of some translated texts (more on that below), the prosecution refused to say in court what Razi wrote in his statuses. All the protestations of the lawyers from Adalah, which claimed that statuses that you publish online can’t be defined as “secret” and that there is no logic to accusing somebody of “incitement” without relating it to specific statements, were in vain.

In one of his hearings, Razi’s attorney argued: “When the publication is the basis of the offense, it doesn’t make any sense that the published material is kept secret… and the publication itself was public.”

The judge rejected the argument.

According to what the Haifa police representative said in court, the State Attorney gave police special permission to open an investigation against Razi on July 10. Only now, after three months of an undercover investigation, did they decide to make the investigation public by searching Razi’s home and detaining the “target.”

For those unfamiliar with Israel’s legal system – it should be made clear that Razi was detained “for interrogation” and was not indicted for any crime. Israeli law allows such detention for purposes of interrogation to last for several weeks.

The art of police translation

In one of the remand extension hearings police presented some Hebrew texts it claimed were translation of statuses which Razi posted on his Facebook page in Arabic. The defense attorney requested to see the original Arabic texts, because translations by the police are sometimes misguided, biased or might distort the author’s intention. Police refused to allow the lawyer to see the original Arabic texts that they claimed to have “translated” – claiming that they were secret investigative materials.

Several years ago a group of protesters from the city of Allid (Lod) was accused of possessing a sign that says “كل الكرامة والعزة لشهدائنا الأبرار” (All the honor and glory of our innocent martyrs). The police translated it to “כל הכבוד לעזה והמחבלים המתאבדים” (“All the honor to Gaza and the suicide terrorists”). The detainees’ attorney argued strongly against the false and misleading translation, which violated his client rights. The judge (in this case eager to see justice) ordered the police to bring a professional translation by an academic expert in Arabic.

The protesters remained in jail for another week, until the authorized translation arrived.

You might understand that we were all deadly curious to know what was in Razi’s Facebook statuses.

So after full seven days in detention, when Razi was finally released on Wednesday, we went to his family’s home in ‘Iblin (in the Galilee), where he is under house arrest, to say Hamdillilah ‘A Salameh and ask what those dangerous statuses were all about.

Razi gave us many examples of the statuses he was interrogated about, divided between the foolish, misleading translations, ignorance, gossip, whatever. But at least in one case I could understand the horror his status aroused in the people that are responsible for state security.

“One day the nightmare will be over,” the status read.

The interrogator claimed he clearly wrote it to express his wish that the state of Israel will cease to exist!

Razi has his own blog (Arabic) and I’m sure that he will write all the important details about his detention and interrogation. But as of now he is forbidden by court order from touching a computer or any other “media tool,” including a phone (until Sunday), a release condition the police didn’t even ask for.

*Yoav Haifawi is the pen name of a Haifa-based activist. He maintains the Free Haifa blogs (in English, Arabic & Hebrew). A version of this article first appeared on Free Haifa English.