The reaction of Israeli onlookers was overwhelmingly negative, with bystanders making racist remarks; after Israeli forces arrested the six activists, a Palestinian journalist was also detained 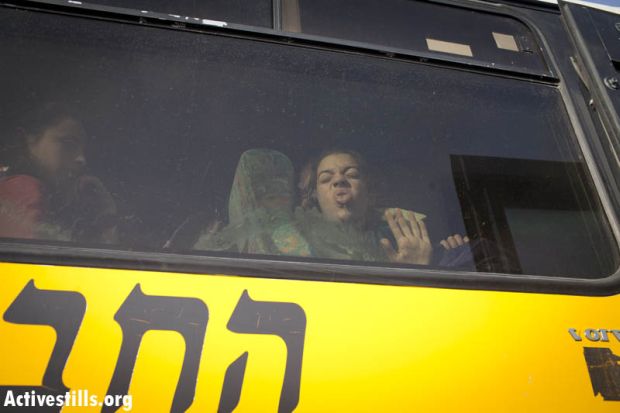 An Israeli schoolgirl sticks her tongue out at Palestinian activists (Photo: Activestills)

After a short press conference in Ramallah early Tuesday afternoon, journalists followed a van of six Palestinian Freedom Riders to a bus stop in the Jewish settlement of Psagot, which is located in the West Bank.

There, activists—who included Dr. Mazin Qumisyeh, a professor and the author of Popular Resistance in Palestine and Huwaida Arraf, a founder of the Free Gaza Movement—waited for a Jerusalem-bound bus. The Egged line they hoped to ride, 148, would pass through the Hizma checkpoint, entering the Jewish settlement of Pisgat Zeev, which is located in East Jerusalem, outside of the Green Line.

The Jewish Israelis who had been standing at the bus stop—a middle aged woman and an off-duty soldier—quickly distanced themselves from the activists, who were wearing keffiyeh and t-shirts bearing the words Freedom, Justice, and Dignity in Arabic and English.

Magi Amir, a resident of Rimonim, explained to +972 that she moved away from the crowd because she heard people speaking Arabic.

Amir added that, in her opinion, Jewish Israelis can’t trust Palestinians or believe in them. “They’ll do terror attacks,” she said.

Other Jewish settlers who came and waited for the bus echoed Amir’s sentiment, remarking that they feared for their safety.

A 16-year-old Jewish Israeli, who wished to remain anonymous, said that the Freedom Riders shouldn’t be able to board the bus because, “It’s an Israeli bus.”

When asked about those who feel differently, the boy replied, “Those who say this is Palestinian land don’t have proof.”

He added that Palestinians enjoy a lot of freedom. “We give them identity cards and they can do whatever they want.”

+972 asked the boy, a resident of Maale Adumim who wished to remain anonymous, if Palestinians can do whatever they want, then why can’t they ride a bus to Jerusalem?

“Okay,” he said. “They can do what they need to… I don’t want them boarding the bus.”

Two Egged buses slowed but passed. When the third stopped and opened its doors, the six activists boarded, as did an Israeli policeman and some two dozen journalists.

A teenage girl with long, curly, blonde hair talked to a friend as she watched the activists get on the bus. “What are they doing? They have their own [buses]?” she said. She moved the phone away from her mouth and yelled at the male activists, “You sons of bitches!”

“You whore,” she said shouted at Arraf, the only female Freedom Rider.

On board, the Palestinians’ presence sparked an argument between two young Jewish Israelis girls, aged 13 and 17.

“No, not everyone,” the older answered.

When the younger mentioned that a family member had been injured in a terror attack, the older girl said that a friend of hers had been, as well.

The younger insisted that violence is “Arabs; it’s the people.”

“So you’re Jewish and you also have your people. What’s the connection?” the older said, rolling her eyes.

The bus was stopped at Hizma and was not allowed to continue through the checkpoint. Israeli forces took the activists’ identity cards and tried to remove Badia Dweik, an activist who was arrested during the First Intifada when he was15 years old. Dweik resisted nonviolently and ended up lying on the stairs of the rear exit for awhile.

After remaining at the checkpoint for some time, the vehicle was directed towards a parking lot.

As the sun set outside, Israeli forces boarded and told the six activists that they had been arrested and that they could choose to go quietly or they would be forcefully removed from the bus. Each of the activists refused to leave the bus. Police and border patrol carried them off. There was an audible thumping sound as one activist’s head hit the stairs as Israeli forces him dragged him out.

The six activists were put in a military jeep and were taken to Atarot prison.

Mohamed Jaradat, a Palestinian journalist based in Ramallah who holds a green ID card, was detained by Israeli police. As they walked to the car, +972 reminded police that Jaradat is a journalist and a member of the media.

A policeman replied, “So?”

Jaradat said that the police were going to take him to the checkpoint and drop him off. Later that evening, however, Hurriyah Ziada told +972 that Jaradat had been arrested.

UPDATE: All of the detainees have been released.