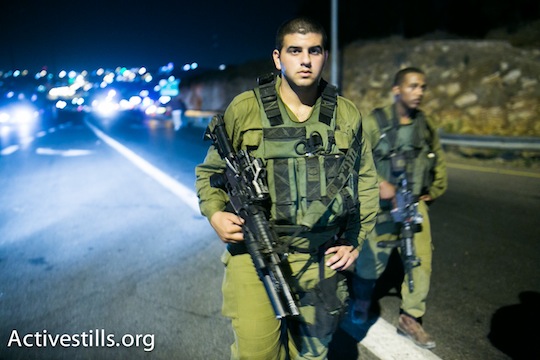 Israeli soldiers near the Palestinian city of Halhul, where the bodies of the three kidnapped Israeli teenagers were found. (Photo: Activestills.org)

In response to the murder of the three Israeli teenagers kidnapped two weeks ago, the Israeli Air Force struck 34 targets in Gaza Tuesday night, while four rockets were fired into southern Israel from the Strip. In the West Bank, the Israeli army killed 16-year-old Yusef Abu Zaga in Jenin after it entered the city to make arrests.

Israel’s High Court approved the destruction of the home of Ziyad Awad Tuesday morning. Awad is standing trial in military court for the murder of Baruch Mizrachi, who was killed while traveling with his family near Hebron on Passover eve. Awad has not been convicted of the allegations leveled against him.

Israeli troops reportedly damaged the family homes of two suspects in the deadly kidnappings, although the army initially denied demolishing the homes. Elsewhere in Hebron, Israeli settlers reportedly threw stones at Palestinian homes and one Palestinian man was reportedly taken to hospital after being beaten by soldiers. Settlers also reportedly marched through the Old City of Hebron demanding revenge. 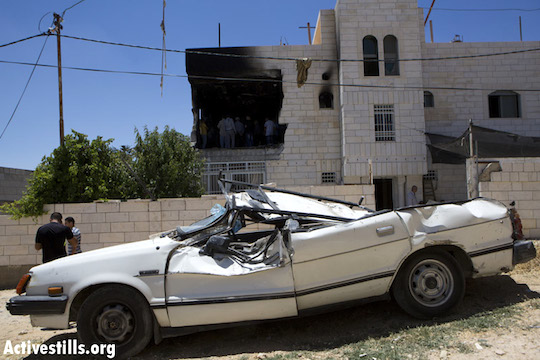 The damaged family home of Amer Abu Aisheh, one of two Palestinians identified by Israel as suspects in the killing of three Israeli teenagers, after it was damaged by the Israeli army in the West Bank city of Hebron, Tuesday, July 1, 2014. Abu Aisheh has not been arrested but security forces have been searching for him since the kidnappings, his family says. (Photo by Activestills.org)

After the boys’ bodies were discovered on Monday, Israeli politicians quickly spoke of the need to deal a blow to Hamas, which they have consistently accused of being behind the kidnappings. Hamas has maintained that it did not carry out the kidnappings or murder of the teenagers.

Prime Minister Benjamin Netanyahu stated that Eyal Yifrah, Gilad Shaar and Naftali Fraenkel were, “abducted and murdered in cold blood by human animals,” and that, “Hamas is responsible — and Hamas will pay.”

Defense Minister Moshe Ya’alon stated that the Israeli government sees Hamas as “responsible for the kidnapping and murder, and know we will settle the score with them.” Justice Minister Tzipi Livni said, “we will continue to strike forcefully against Hamas, for the sake of the future.”

Watch: IDF blows up the home of Amer Abu Aisheh:

Politicians on the far right were less restrained in their calls for revenge. Economy Minister Naftali Bennett said, “there is no absolution for the murderers of children. Now is the time for actions,” harshly criticizing what he saw as Netanyahu’s lackluster response to the murders.

Housing Minister Uri Ariel added that in addition to striking back, there must also be “an appropriate Zionist response,” an allusion to building new settlementes. Jewish Home MK Ayelet Shaked stated, “We must deal accordingly with a nation whose heroes are children murderers.” 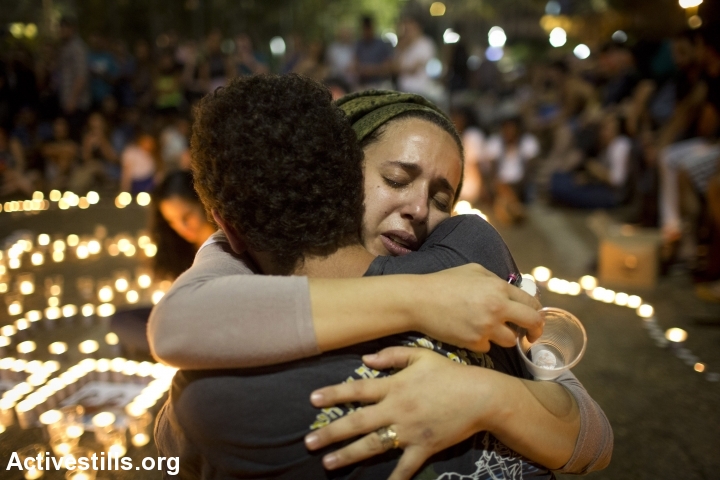 Israeli mourners console each other during a memorial for the three murdered teens in Rabin Square, Tel Aviv, June 30, 2014. (Photo: Activestills.org) Israelis gathered in public squares in Tel Aviv, Jerusalem and other major cities to publicly mourn the three yeshiva students, who were missing for over two weeks before being found dead in the southern West Bank Monday.

Likud MK Miri Regev, who has never shied away from making controversial statements, took the opportunity to target MK Haneen Zoabi, who recently refused to call the kidnappers “terrorists,” and called on Israel’s attorney general to put Zoabi on trial. Regev said she was positive the Knesset would not grant her immunity.

Zehava Galon, leader of the left-wing Meretz party, said about the deadly kidnappings, “there is no doubt that blood is boiling following the murder of the three kidnapped teens, but Netanyahu’s test of leadership lies in his ability to show restraint and avoid escalation, refusing to get dragged down by the voices of the right who seek revenge and draconic collective punishment.” Hadash MK Mohammad Barakeh condemned the murder, saying that “the deaths of the Israelis and Palestinians is the result of the collective tragedy that the two nations live in, the tragedy of an ongoing occupation.

More on the kidnappings:
Three kidnapped Israeli teens found dead in the West Bank
‘I don’t want my kids to experience a third intifada’