Our hearts are desensitized by horror fatigue, convinced that nothing can change. But we must still try, if not for the dead then for the living. 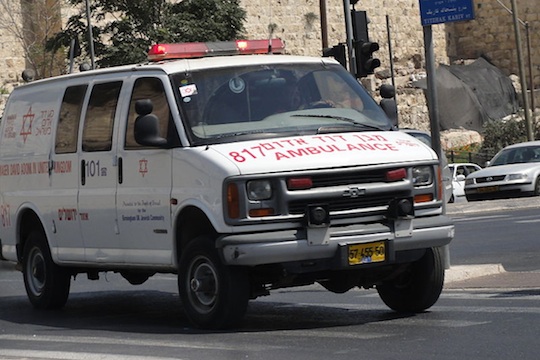 A lifetime of sorrow lies before four children who became orphans last night when their parents were killed in a hailstorm of bullets on a West Bank road. The children were in the car when it happened, including a four-month-old infant. The oldest was nine. They were unharmed physically, but their suffering is indescribable.

But it’s time to admit that aside from their circle of family and friends, no one else really cares. If we did, we would change our circumstances. Instead, the conditions and sentiments before and after the attack are routine — ritualized. We are caged inside a dystopian daily theater performance, in which actors respond like robots programmed to repeat their lines forever.

The Right, whose settlement expansion agenda has run roughshod through the West Bank for nearly five decades, says the attack demands further settlement expansion. On Wednesday, about 50 families made a pilgrimage to a new site they call “Shalem” – meaning whole – in the same area as the attack, dancing and celebrating the future settlement. Thursday evening, the family was killed on that road. Friday morning, right-wing websites announced a march to the site in response.  It’s a settle-die-and-settle dance.

Prime Minister Netanyahu also repeats his lines verbatim, like a mad caricature of himself: Palestinians, and first of all Mahmoud Abbas, incited the attack and didn’t condemn it. His “sounds of silence” speech in the UN just hours earlier now has a perfect bookend soundbite: “look at the PA’s deafening silence,” despite the fact that “we condemned the attack in Duma.” To Israeli ears, this translates as: Israel wants peace, Palestinians are “bloodthirsty,” as per the right-wing commenters.

The Left, too, offers the usual answers: Zuhair Bahalul from the Zionist Union (Labor Party) said that regular people are paying the price for the frozen political situation. After another recent death, my colleague Lisa Goldman argued that the only way to stop stone throwing in East Jerusalem is to give residents full rights and end the occupation. The left-wing script reads, broadly: the lack of a political resolution feeds the violence. We don’t condone such things, but what can you expect. If we end the occupation and reach a final status accord, the violence will subside.

But these stock lines are shutting down our minds. Our hearts are desensitized by horror fatigue, convinced that nothing can change, so why try. That’s because the failed interpretations and prescriptions no longer describe reality. If we call our current ills by their name, maybe better ideas about solving them will emerge.

First, Netanyahu is obsessed with the idea that there is no alternative to the deadly status quo. I wonder if the four orphans of the Henkin family want to maintain the status quo. I feel sure the Dawabshe family doesn’t, nor the family of 18-year-old Hadeel Hashlamoun, or Alexander Levlovitz. Netanyahu’s  sorrow for them is one big shameful lie unless he rejects and changes the status quo.

The answer is that Israel finds Palestinian murderers within hours, days, or weeks. They are either killed on the spot (unfortunate but unavoidable, it says), or their homes are destroyed – even while they are still suspects, and sometimes when they have not yet committed an attack. Were they to be apprehended, they would be tried in military court.

The suspected Jewish murderers of the Dawabshe family have been detained but not charged. There is no collective punishment, but also no due process punishment to provide either justice or deterrence. In the burning-death of teenager Muhammed abu Khdeir, three suspects are standing trial in a civil court, a case that has dragged on and fallen off the headlines. We must stop demanding condemnations and demand justice – with civil rights, equally, swiftly.

The right-wing script that settlement is the answer is a used-up ruse — it too must be replaced. The truthful right-wing response is: the political meaning of settlement is a Jewish-controlled single state between the river and the sea, and we hope it will be so uninviting for Palestinians that they will leave. The religious meaning is fulfillment of a messianic prophesy. The meaning for individuals is that you will lose your lives – either as soldiers, as civilians, and sometimes as children. Your survivors will live in misery.

And the left-wing approach that a political resolution ending the occupation through two states, or any other just political framework, will end terror must be revisited as well. Over the last two decades, the Left lost so much credibility on this point that it has never recovered.

We must look human nature in the eye and admit: there will never be perfect security – not here, not anywhere. As the Henkin parents were murdered, 10 young people were being executed at a college in Oregon, for no reason at all.

The truthful answer is that a political resolution is mandatory not because it will end death, but because the current situation is misery for the living. The lives of Israelis are mostly fine. Israel can strum the victimhood chord, but Israeli Jews just told a right-wing newspapers, Israel Hayom, how overwhelmingly happy they are. The lives of Palestinians are unlivable. They are trapped geographically, economically, professionally, and politically.

A political resolution will never stop the crazies. But it will remove as many of the reasons as possible for normal people to join their ranks. And if only one less person dies, it will be as if we saved the whole world.

Correction: Several early reports of the attack stated that the family had six children in total, which was originally stated here. The  family has four children and this article has been updated.