I am a strong, independent and successful woman. Yet Israeli society is unwilling to understand that wearing a hijab is my choice. 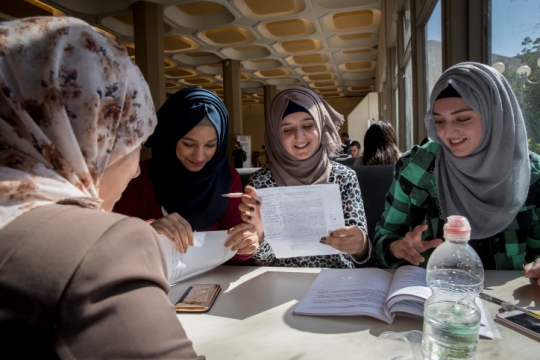 Two years ago I decided to start wearing a hijab. I had a feeling that this is what I wanted at this stage of life. The spiritual need pushed me there. I was convinced, despite the social and political reality we live in. I knew that this would be a decision that would change many aspects of my life, affecting my work, my job, my ability to be accepted to an internship, and especially on the behavior of those around me. And yet, I didn’t hesitate for a second, even though I knew I was about to pay a price.

I work as a pharmacist, and I recently finished my law degree and currently intern for the Association for Civil Rights in Israel (ACRI). I have two children and a loving, supportive husband. I was raised to be a strong, independent woman who knows how to ask question and do everything herself. Yes, even including using a drill to hang photos on the wall. My entire life has been paved with precedents, but the decision to wear a hijab has turned out to be an especially challenging one.

The responses didn’t take long. It seems that the customers at the pharmacy preferred a pharmacist without a hijab. Some of my coworkers began giving me weird, often suspicious looks. People at university questioned my decision. There were those who wondered whether this was a final decision, or whether there was a way to change my mind — as if I had decided to commit suicide.

Does a religious Jewish woman also scare you?

People began wondering how my health was, as if something terrible happened. As if I had fallen prey to a fatal illness and now I am wearing a hijab to protect myself or ask for mercy and healing. “I’ve become religious,” I say with a smile.

The world is changing and developing, until it comes to hijabi women. You suddenly have to face reality: my car is stopped at the entrance to Ben Gurion Airport, where I am asked to present my flight ticket. On the journey back I undergo a security check in a separate area — VIP treatment. My bus ride to work in Tel Aviv is always comfortable, since the seat next to me is always empty. When I walk into a courtroom and present my intern badge, the guard at the door always takes an extra long look. At the line in the central bus station, people keep their distance from me, allowing me to breathe. Even the cosmetics salespeople at the local drugstore have stopped offering me products. She doesn’t apply makeup, she probably doesn’t even wear perfume, they must say to themselves. Every move I make raises suspicions, even when I’m only taking out my Vogue sunglasses out of my Dior bag.

A week ago I was traveling from Tel Aviv to Afula, in Israel’s north, on public transportation. I left my bag in the baggage check and passed through the metal detector. The security guard — whose appearance left an impression that his status in Israeli society was not much higher than that of Arabs — stopped the machine. He asked where I was from and asked to present my ID. I was being detained, and was let go only after yelling that I was not going to miss my bus.

A few feet of fabric can make such a huge difference. I do not walk around with my face covered or even a black chador that covers my entire body. Only a hijab, with which I wear regular clothes, just like the average woman from Tel Aviv. Even Dolce & Gabbana have designed a hijab, yet Israeli society is unwilling to understand that wearing one is a woman’s choice. All this, of course, makes me wonder whether a religious Jewish woman with her hair covered scares people too, or if this privilege is saved for Arab women alone.

And most importantly, my hijab causes people I meet to see and know that the world is full of intelligent and confident Muslim women who work hard and give back to society. Muslim women who can be mothers, lecturers, doctors, and judges. Muslim women who can fall in love and walk hand in hand on the beach with a partner that they have chosen. And all out of their free will. And if you still don’t believe me, know this: there are many more like me.

Seren Khateb Shahbari is a pharmacist and a legal intern. This article first appeared in Hebrew on Local Call. Read it here.