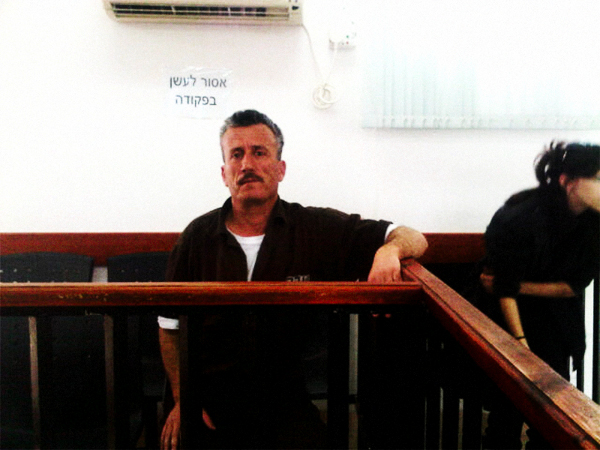 Minutes after Bassem Tamimi entered his home to prepare for a meeting with foreign diplomats, dozens of Israeli soldiers stormed his house at the West Bank village of Nabi Saleh and arrested him. The soldiers tried to prevent Tamimi’s wife, Nariman Tamimi, from filming the arrest, hitting her and trying to grab the camera from her. When she passed the camera to her 10 year-old daughter, the soldiers grabbed it from her using violence and threw it outside in the mud.

Tamimi is one of the prominent figures of the Palestinian popular struggle in the West Bank and considered by many as the engine behind Nabi Saleh’s grassroots mobilization against the occupation and for the protection of the village’s lands from settler take over.Just yesterday, another leading protest organizer from Nabi Saleh, Naji Tamimi, was indicted on charges of incitement and organizing illegal demonstrations. The court extended his arrest until the end of legal proceedings. Bassem Tamimi is expected to face the same charges.Over the past two months, the army has arrested eighteen of Nabi Saleh’s residents on protests related suspicions. Half of those arrested are minors, the youngest of whom merely eleven.

The majority of recent Nabi Saleh arrested are made based on incriminations extracted from a fourteen year-old boy from the village, recently arrested at gun-point during a military night raid. The boy was then subjected to verbal and emotional pressure during his interrogation, denied his fundamental right to legal consul and interrogated in absence of his parents, albeit obliged by law. The interrogators have also never bothered informing the boy of his right to remain silent.

Ever since the beginning of the village’s struggle against settler takeover of their lands, in December of 2009, the army has conducted 64 arrests related to protest in the village. As the entire village numbers just over 500 residents, the number constitutes a gross 10% of its population. Tamimi’s arrest today corresponds to the systematic arrest of protest leaders all around the West Bank, as in the case of the villages of Bil’in and Ni’ilin.

Only recently the Military Court of Appeals has aggravated the sentence of Abdallah Abu Rahmah from the village of Bilin, sending him to 16 months imprisonment on charges of incitement and organizing illegal demonstrations. Abu Rahmah was released last week. The arrest and trial of Abu Rahmah has been widely condemned by the international community, most notably by Britain and EU foreign minister, Catherin Ashton. Harsh criticism of the arrest has also been offered by leading human rights organizations in Israel and around the world, among them B’tselem, ACRI, as well as Human Rights Watch, which declared Abu Rahmah’s trial unfair, and Amnesty International, which declared Abu Rahmah a prisoner of conscience.

From the Popular Struggle Coordination Committee