Nearly 50 Israeli teenagers of draft age send letter to Prime Minister Netanyahu, stating clearly that they will refuse to join the IDF due to the occupation of the West Bank, and the violent effect it has on Israeli society.

Dozens of Israel teenagers signed a letter to Prime Minister Netanyahu on Saturday, in which they announced that they would refuse to serve in the Israeli army come draft time.

According to the letter, the teenagers are refusing to enlist in the army due to their “opposition to the military occupation of Palestinian territories,” where “human rights are violated, and acts defined under international law as war-crimes are perpetuated on a daily basis.” Aside from the ultra-Orthodox and Palestinian citizens of Israel, army service is mandatory for all Israelis (three years for males, two for females).

The letter goes on to decry the effect of the occupation on Israeli society itself, especially the way it “shapes the educational system, our workforce opportunities, while fostering racism, violence and ethnic, national and gender-based discrimination,” and promotes and perpetuates “male dominance” and oppressive gender structures within the army itself. 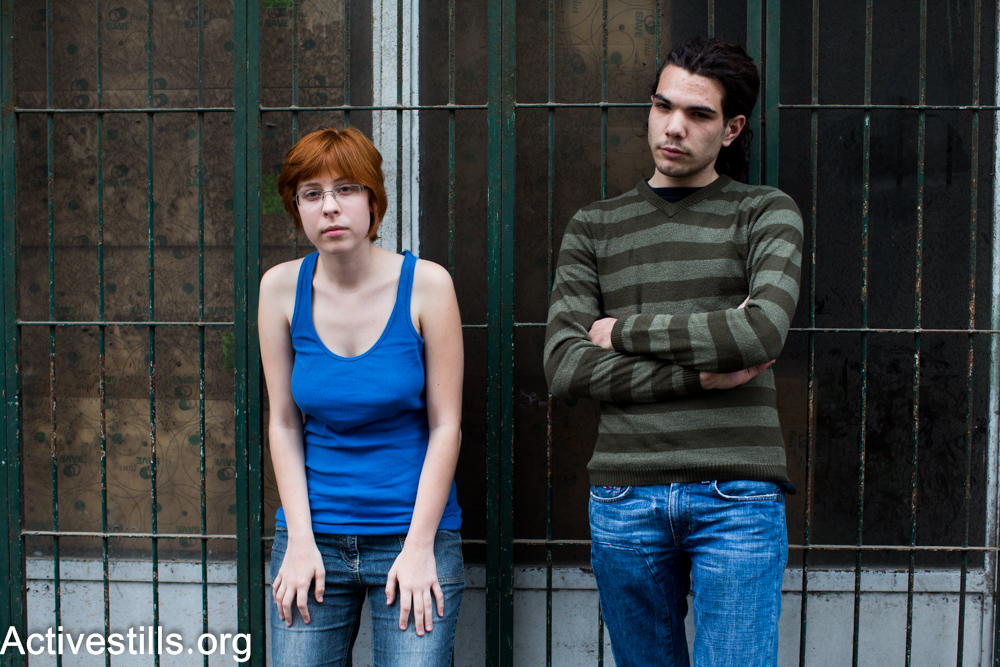 Dafna Rotstein (left) and Roni Lax, two of the refuseniks who signed the letter to Prime Minister Netanyahu. Lax: ‘If they decide to enlist me by force, I’ll sit in prison.’

Udi Segal, an 18 year old from Kibbutz Tuval in Israel’s north told +972 that his signing of the letter is connected to the rightward shift taking place in Israeli society.

“I cannot take part in an army that occupies another people and makes Israeli society more violent and apathetic to what is happening,” says Segal.

17-year-old Elza Bugnet, who also signed the letter, says the issue is not solely about opposing the military. “The idea is to bring the idea of the occupation up for public discussion. To create a new understanding of enlistment and what that means for Israelis, and especially what it means for the occupation.”

Bugnet, who is originally from Tel Aviv, says that her friends and family support her decision to refuse. “I get a lot of support from my family – we share the same beliefs. A lot of my friends don’t necessarily agree with my choice, but appreciate what I am doing regardless.”

Segal’s family, on the other hand, has had a more difficult time with his decision. “My family doesn’t necessarily agree with my decision. They mostly worry about my future and what repercussions this choice could have. My grandparents are having an especially difficult time, since they are from the generation that established the state, and see army service as mandatory.”

For Roni Lax, a 20-year-old and former member of the ultra-Orthodox community, refusal is part of his family history. “My father sat in jail for refusing to serve on religious grounds,” Lax tells me over the phone. “My parents generally do support my decision, but for different reasons.”

Lax’s encounter with the military came at around age 16. Growing up in the ultra-Orthodox community in Bnei Brak, Lax was pressured to remain committed to religion and study at a yeshiva (aside from a very small percentage, ultra-Orthodox are not generally required to serve in the IDF). At age 17, he began considering enlisting due to the incentives provided by the army for its Haredi recruits.

“In the beginning they wanted to recruit me, but they didn’t want to give me a release for yeshiva studies. At age 19 I left the yeshiva and did a year of national service, during which I decided that I didn’t want to take part in the army.”

Lax, who began his enlistment process prior to signing the letter, and is currently trying to get an exemption for health reasons, says he signed the conscientious objector’s letter for two reasons: refusing to take part in the system that occupies Palestinians, as well as out of solidarity with what is often referred to as “grey refusers,” or people who refuse to enlist or go AWOL out of financial necessity.

When asked about the possible consequences, Bugnet says “We know that the outcome might be problematic, but we cannot be a part of an army that takes upon itself to occupy another people.” “I am sure there will be a big price to pay,” adds Segal, “but I don’t really want to live in a community that measures me by whether or not I served in the army.”

Lax manages to sound confident, despite his uncertain near future. “It’s enough for me to know that one other person read the letter and changed his or her mind. That’s how I know I’ve done my job. But I have no idea what’s going to happen now. If they decide to enlist me by force, I’ll sit in prison.”

Read more:
Druze teen: ‘I will not be a soldier in your army’
WATCH: Supporters stage prison vigil for conscientious objector Natan Blanc