Human rights activist Gary Spedding was refused entry to the country in 2014 over suspicions that he would ‘incite a riot.’ Jerusalem tribunal shortens ban from 10 to 5 years. 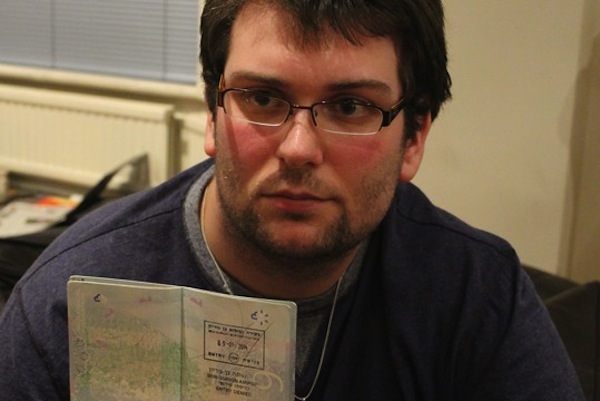 An Israeli tribunal rejected last week an appeal filed by a British human rights activist who was banned from entering the country for 10 years. The tribunal based its decision on secret evidence handed over by the Interior Ministry.

Gary Spedding, a 26-year-old human rights and pacifist based in Northern Ireland, was refused entry and banned from Israel in January 2014 due to his social media activity. Spedding, who is active in reconciliation efforts in Northern Ireland as well as Israel/Palestine, had planned on visiting Israel for a round of meetings, including with several members of Knesset.

Despite previous visits to the country without any problems, Spedding was denied entrance at Ben Gurion Airport, where he was told that his activity on social media raises suspicions that he may incite riots in Israel and the occupied territories. He was held at the airport, where he was informed that the Interior Ministry refused his entry and banned him for 10 years. He was promptly sent back to the U.K.

Refusing entry and deportation of political activists who are critical of Israel’s occupation has become a common occurrence in the past few years. However, unlike most activists, Spedding decided to appeal the Interior Ministry’s decision. Attorney Gaby Lasky appealed the Interior Ministry’s decision to the Entry to Israel Law Review Tribunal, where she argued that the decision to refuse him entry stemmed from his political opinions, and that the ban harms not only Spedding, but the Knesset members and Israeli citizens who are interested in meeting with him.

Although the appeal was filed in October 2014, the tribunal only came to a decision last Wednesday. Judge Sarah Ben Shaul Weiss’ decision is laconic and does not truly get to the heart of the matter or respond to the arguments made in the appeal. “According to the law, the interior minister has broad-ranging powers derived from the Entry to Israel Law,” Weiss writes. “The appellant has no right… to enter Israel, even if he previously entered the country and was not accused of disturbing the peace during his previous entries.”

Weiss did recognize that some of the reasons stated for refusing Spedding entry are invalid, cutting his ban down to five years, and ordering Spedding to pay NIS 1,500 in legal expenses.

“The judge writes that she rejects the request, while at the same time shortening the ban — that is, she is able to intervene and thinks that he should be able to enter the country,” Lasky told +972. Spedding is planning on appealing the tribunal’s decision.

“One can see the tribunal’s bias by the very fact that it is making the appellant pay legal expenses in a situation where the appeal was partially accepted. In these cases there is no room for legal expenses — this is a bad legal mistake.”

“The ruling is disappointing but not unexpected,” Spedding told +972. “I had hoped for a positive decision, which would have allowed me to return to Israel and Palestine this summer, but it seems this was not to be. This is happening to many international activists as they try to enter Israel and Palestine. Since my deportation in January 2014 I’ve read of at least 20 other cases where international activists have been treated in similar ways. I’ve seen far more instances where Palestinians have suffered far worse treatment at the entry points. Such discrimination and degrading treatment must end.”