Forty years after the fall of Argentina’s murderous military dictatorship, dozens of Argentine-Israelis are demanding the Israeli government open up about its past ties to the junta. 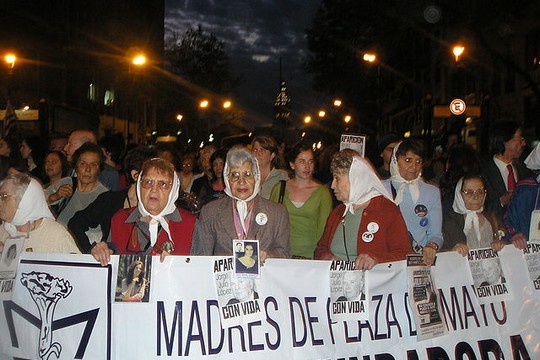 Mothers of the Plaza de Mayo, whose children were “disappeared” during the Dirty War of the military dictatorship, between 1976 and 1983, protest in 2006. (photo: Roblespepe/CC BA-SA 3.0)

Last week marked 40 years since the military coup that led to the establishment of the junta in Argentina. Recently, a group of dozens of Israelis of Argentinian origin came together to file a freedom of information request to demand the Israeli government release all documents on military and diplomatic ties between Israel and the junta.

On March 24, 1976, Argentina underwent a military coup, leading the way for the establishment of a military government, which tortured and murdered close to 30,000 people until it relinquished control of the country in 1983. Israel, according to many testimonies, maintained ties with the dictatorship, aiding it with weapons and military training.

Israeli journalist Shlomo Slutzky, who was part of the group that filed the freedom of information request, came to Israel from Argentina three weeks after coup. After arriving in Israel, Slutzky became active in the “Committee for Solidarity with the Argentinian People,” which worked to put pressure on and raise awareness about the dictatorship. Among its activities, the committee organized demonstrations outside the Argentinian embassy in Israel, during which the protesters covered their faces to make sure they weren’t being photographed from inside the embassy, as well as protests against the airing of World Cup games, which were held in Argentina in 1978 (the junta used these to whitewash the murder and torture of its citizens).

Speaking to +972’s Hebrew-language sister site, Local Call, Slutzky said that the request was intended to “expose information on what Israel did and didn’t do at that time. What kind of friendly and economic ties it had with Argentina. Did it, like many diplomats have claimed in the past, maintain relations and weapons contracts that were signed before the coup? For instance, Ram Nirgad, who was Israel’s ambassador to Argentina at the time, told me already in 1977 that he understood who and what he was facing. How could that be? Only years before did Jews come to the embassy in Buenos Aires asking for protection and help.”

“Today I know that many Israeli diplomats did not know what do with Jews who were not Israelis in Argentina. They did not know whether to intervene in internal Argentinian affairs. I believe that when the documents are revealed, we will see a very complex picture. On the one hand Israel sold weapons and cooperated with the regime on different issues, while on the other Israeli representatives helped hundreds of people escape.”

The Committee for Solidarity with the Argentinian People also worked to aid Israelis of Argentinian origin who underwent torture and bore witness to the concentration camps to testify in the various investigative committees that were established over the years. Slutzky says that these committees did not get media coverage, and that Yitzhak Shamir, who was the speaker of the Knesset at the time, made sure that these meetings were closed off the public in the name of security. Many members of the Committee for Solidarity with the Argentinian People, the Argentinian security services tracked dissidents in Israel through its embassy, which was located on Mapu Street in the heart of Tel Aviv.

The decision to file the freedom of information act was not an easy one. Slutzky: “There are people here who did not sign on to the request because they were afraid it would adversely affect Israel’s image. To this I say that these things will be published anyway in the United States, and whatever isn’t published will actually hurt Israel, since people suspect that Israel was Argentina’s main weapons supplier at the time — which simply isn’t true. Revealing these documents will actually give us a more complex picture and give us examples in which Israeli representatives actually acted to help the kidnapped.

Attorney Itay Mack, who filed the request, along with many other petitions regarding Israel’s ties with regimes that committed war crimes or crimes against humanity, told Local Call: “The research that I did, along with the conversations I had with many people, raises many questions on the true nature of the relations between Israel and the junta in Argentina, whether vis-a-vis security exports as well as aid to those who were persecuted and the disappeared.”

“What’s amazing is that even after 40 years those questions marks haven’t disappeared, and even those who are trying to put this behind them cannot do so entirely,” Mack adds.

“This is a community where many people are still dealing with trauma. The lack of information regarding the fate of their family members, where they are buried, what Israel did to help to persecuted, and what was the nature of its relationship with the junta only strengthens the trauma, and does not allow them to undergo a full recovery process. There are many circles of victims, and 40 years after the junta even those who did not lose loved ones still want to know what happened during that dark time.”