I spent Thursday in Kiryat Gat, Kiryat Malachi, Ashkelon and Sderot–the Israeli cities under Hamas fire. I spoke to dozens of Israelis; support for Operation Pillar of Defense was unanimous, though no one thought it would bring lasting peace. Most felt it would bring temporary quiet; many believe that Israel needs to reoccupy the Gaza Strip.

At a commercial center in Kiryat Malachi, a short walk from the apartment building where three Israelis were killed Thursday morning by a rocket fired from the Gaza Strip, an elderly man selects tomatoes at a small produce stand. The 74-year-old man, who immigrated to Israel from Algeria with his family when he was a teenager and who does not wish to be identified, says that he is not worried about additional rockets.

“I’m safe here,” he says, as he examines a tomato, “I’m following the [Israeli Army Home Front Command’s] directions and doing what they say. So there’s no problem.”

The father of six and grandfather of nine said that he like most Israelis support “Operation Pillar of Defense,” which has taken the life of 15 Palestinian residents of Gaza since it began on Wednesday.

Two men, sipping beer out of plastic cups outside of a nearby cell phone accessories store, voice similar feelings.

Eli Chalilo, a 38-year-old who emigrated from Uzbekistan with his parents when he was 18, says, “Right now we feel fine, but this morning was a little stressful.” He adds that his house is just 200 meters from the building that was hit by a rocket.

Chalilo, who is currently unemployed, wears a white sweat suit and sunglasses. He sent his two children to family in Jerusalem because he is worried about their safety. But, he adds, he is not concerned about his own security. He points to the sky, “God’s up there.”

The two men are joined by Eli Pozielov, 31, the owner of the cell phone accessories store. The father to three children, aged three, four and five, says, “My kids are crying. They’re scared, I’m scared, I don’t know what to do, where to go.” 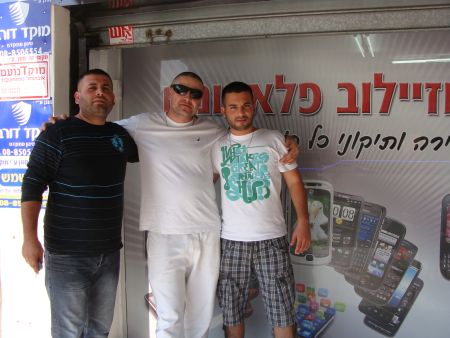 Chalilo and friends in Kiryat Malachi, just a few minutes walk from the apartment building where three Israeli were killed by a Hamas-fired rocket (photo: Mya Guarnieri)

His wife works in Ashdod and, with schools and kindergartens closed, Pozielov left the children with his sister so he could come to work. But, “no one’s coming to the store [to buy anything]. People aren’t going out of the house.”

Pozielov feels the operation is necessary and thinks that Israeli ground forces need to enter the Gaza Strip. “We must, we must. We have to do like we did during Operation Cast Lead but this time stronger.”

He adds that Israel needs to reoccupy the Gaza Strip. When asked about the 1.7 million Palestinians who live there, he answers, “They got used to it already.”

“You have to give them a beating so they won’t raise their heads,”  Chalilo continues, adding that he knows what he’s talking about because he came from a Muslim-majority country.

When asked about his experience living in Uzbekistan, however, he admits, “Everything was fine.”

But Israelis can’t live with Arabs or Muslims, Chalilo insists, “Because this is the Jewish state. It’s our country.”

Although a four-year-old and seven-year-old were killed in the Gaza Strip by Israeli army fire, both men insist that “Operation Pillar of Defense” is “pointed” and that “only terrorists” are dying.

Esti, a 31-year-old math teacher, was home with her children Thursday morning when a missile fired from Gaza hit Kiryat Gat. The bomb shelter attached to her building was locked, she says, so she and the children stood in the stairwell.

When asked how she feels in the wake of the strike, Esti, a religious woman who wears modest clothes and a wig to cover her hair, says, “The messiah needs to come.”

She adds that the army needs to enter Gaza “to show [the Palestinians] who is really in control.” 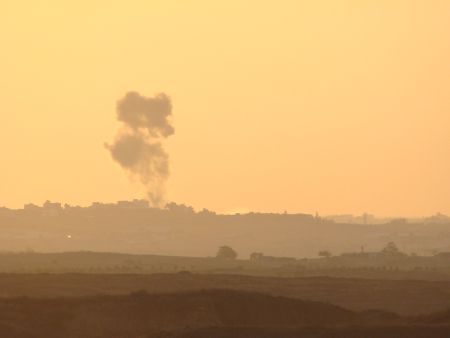 Gaza Strip as viewed from look out point in southern Israel on Thursday (photo: Mya Guarnieri)

Like the men in nearby Kiryat Malachi, she feels that Israel should reoccupy Gaza or, “do something absolute to finish [the conflict with the Palestinians].”

When asked about the implications for Israel’s demographics—wouldn’t reoccupying Gaza mean that a Jewish minority is ruling over a Palestinian majority?—Esti answers, “I don’t know. The solution has to come from above. We’re just people.”

She looks towards her kids, including a little blonde boy who wears a colorful, embroidered kippah (religious skullcap), who are sitting on play horses inside the dark, deserted mall. Only the food court is open. “The people there [in Gaza] also have children,” Esti says. “There are people there who want to live a normal life and an occupation would give them a chance to [do so].”

Despite the fact that Palestinian citizens of the state receive disproportionately less resources and face discrimination in both the public and private sectors in Israel, Esti points to them as an example. “Look at the Arabs in Ramle. They have work, they’re living well.”

“I think the solution is to occupy Gaza and then manage it like a normal state, give them their rights and benefits.” 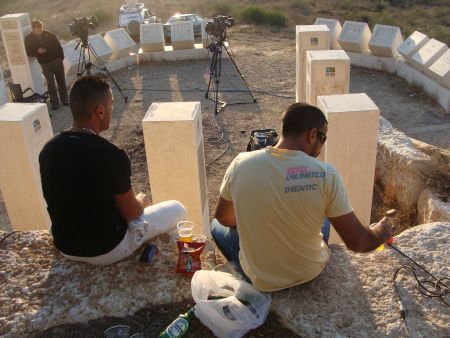 Israeli men drink beer and “wait for fireworks” as they watch Gaza from the look out point near Sderot (photo: Mya Guarnieri)

A handful of Israelis have gathered on a lookout point outside of Sderot. From here, they can see smoke rising from the Gaza Strip. Two men drink beer and eat potato chips; I’m there to cover Israeli reactions for Al Jazeera English and, when I ask the men if they are willing to be interviewed by AJE, they curse. A few boys joke that they have come “to see the fireworks.”

But Amos, a 53-year-old mechanic from Sderot, says that he felt scared and anxious alone in his home with the siren going off. His ex-wife and son live in Jerusalem. So he came to the look-out because he feels safer here.

The siren goes off in Sderot moments before I enter the small, depressed city in the south of Israel. I’m with a group of journalists and Phil Weiss, who is driving, stops the car. I crouch alongside a rear door, as though the thin metal could defend me from a missile. The Iron Dome defense system intercepts the rockets fired from Gaza, rendering them white puffs in the sky above my head.

When we enter Sderot, I see that the streets are mostly empty, save for African refugees milling about near a bomb shelter and a few families that have ventured out for food. Cars rush through town, pausing at stop signs.

Bert Luski, an unemployed factory worker, stands outside of a restaurant that serves falafel and other Middle Eastern foods.

Luski, 56, remembers the days that he worked alongside Palestinians from Gaza. Although he got along fine with the laborers, he says, “They don’t understand peace. They want to take our girls, our money, our houses, our pants.”

Despite “suffering 12 years” of rocket fire, Luski says he’s not scared and he won’t leave Sderot. “What, every time someone throws a stone, I should run from here? That’s absurd.”

“If Bibi Netanyahu stops now, he’ll be making a mistake,” he adds.

While interviewees disagreed on the goals of “Operation Pillar of Defense” and they also disagreed as to who is responsible for rocket fire from the Gaza Strip—with some blaming the Israeli government itself—all called the offensive necessary. But they also agreed that the current round of fighting is unlikely to bring peace.

A version of this article was first published in Al Jazeera English.