In an act of protest one can only find in the world of social media, activists open a Facebook page where Israelis are urged to ‘hand over’ their voting rights to Palestinians.

Every once in a while, social media shows you what an amazing tool it can be.

On December 26, 2012, a new Facebook page was created, called “Real Democracy.” The basic idea behind it is that Israelis “give up” their vote in the upcoming elections to any of the millions of Palestinians under Israeli rule who have no right to vote. It’s all done on Facebook. The Israeli posts a status saying he/she’s willing to do it, the Palestinian tells him/her who to vote for.

The group behind the page consists of Israeli, Palestinian and international activists. Some of them took part in a similar campaign called “Give your vote” in the 2010 elections in England. In that campaign, thousands of Englishmen gave their votes to people in Afghanistan, Bangladesh and Ghana “who are directly affected by UK policies.” According to one activist from the group, the idea is to show the “lack of democracy” not only on the local level in Israel/Palestine, but also on the international level, particularly the UN, which “allows the United States to enable the occupation.”

Here are some examples of Israeli-Palestinian cooperation from the Facebook page from the last few days: 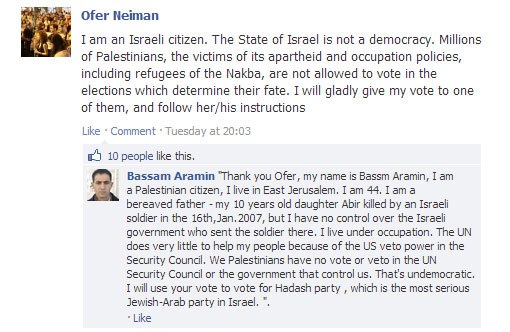 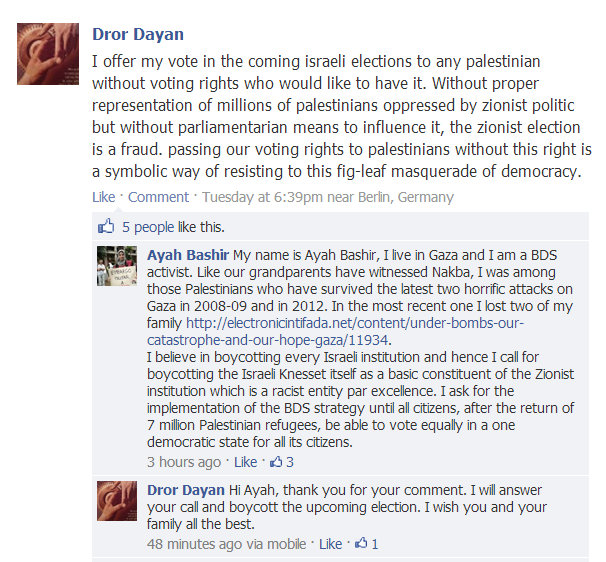 I spoke with the Israeli and Palestinian in the first dialogue above:

Ofer Neiman: “Over the past few years I reached the conclusion that parliamentary change will not come from the Left. That is why I decided it was time to change the rules of the game. Too many good Leftists invest their time in trying to change from the inside, I support BDS and in general anything that undermines the legitimacy of what I see as an apartheid regime. These elections are not democratic, they are not legitimate. I used to be an activist in Hadash, but I no longer support any party in the system. Yet, I will happily vote Hadash because that is what Bassam asked me to do. It is the decision of someone who has no vote. I am only the messenger, I have no deliberation about it.”

Bassam Aramin: “I am 44 from the West Bank village of Anata. Between the ages of 17-24 I sat in an Israeli jail, for rock throwing. My daughter was killed by a rubber bullet to the head, shot by Israeli soldiers. She was 10 years old, in 2007, and was standing outside her school (more about Bassam’s story and his struggle for justice can be read here – A.K.) I saw the initiative on the internet. And yes, we want a real democracy. You are not a democracy if you occupy another people. I’ve heard there are calls to boycott the elections. I think this is wrong. If you have a vote, you should try to change. Hadash is my choice, because it is an Arab-Jewish party that calls for coexistence between both peoples. It’s very important for Palestinians to know, that this campaign shows that there are human beings on the enemy’s side. They have volunteered for this, no one is forcing them to do it. They are giving up their vote in an act of protest, saying to us that they are with us in our struggle. It is very important for the reconciliation and peace agreement that will come in the future.”

The group hopes that the dialogues will slowly move onto the official Facebook page in the next coming days. The following is from the About section on the page.

This is an act of refusal, a democratic rebellion. We are Palestinians and Israelis who refuse to participate in the illusion of democracy anymore. In the upcoming Israeli elections we, citizens of Palestine, will exercise our civic right to vote. We, Israeli citizens, will give up our own votes and instead vote as our Palestinian counterparts tell us to.

We believe that all people are born equal. This is supposedly a universal value. Yet the current Israeli and international law do not treat the citizens of Palestine and the citizens of Israel equally. Without a ‘one person-one vote’ system, Israel cannot be democratic. Without equality between citizens, the UN and other global institutions cannot be democratic. Either the Israeli occupation stops, or all Palestinains must be allowed to vote in the Israeli elections. To leave Palestinians subjects of a state in which they are not full citizens, is in contradicion with the basic principles of democracy.

We know that to some, this is a provocative act. We hope to provoke thought, dialogue and a political change. What we want is equality between people – in Palestine, Israel and the world.

We are not alone. The world-wide struggle for institutions that reflect equality between people is a long and difficult one. In a similar campaign in 2010, citizens of the UK gave their votes to people from Afhganistan, Bangladesh and Ghana. Another campaign will take place in Germany in 2013. We are inspired by our sisters and brothers in squares in Tunisia, Egypt, Syria, Mexico, Spain, the US and Britain, inspired by the movements for women’s suffrage, the Indian resistance to the British occupation, the struggle for democracy in South-Africa and the American civil rights movement. Their victories give us hope. We too shall overcome.