The brutal police beating of a young Bedouin man outside his Tel Aviv workplace, where he was working to save money for university tuition, leads hundreds of Israelis to pitch in and pay his tuition. (Update: the crowdfunding campaign has reached 200 percent of its original goal.)

Mayasem Abu Alqian, a 19-year-old Bedouin citizen from the southern town of Hura, was attacked on Sunday by a group of Israeli Border Police officers near Rabin Square in the middle of Tel Aviv. Two plainclothes policemen approached Abu Alqian on the street outside his work, demanding that he produce an ID. Abu Alqian, not willing to identify himself to just anyone, demanded a uniformed police officer.

Within a matter of seconds, more policemen arrived at the scene and, according to eyewitnesses, started brutally attacking him. Abu Alqian was arrested and taken to the police station. Only hours later he was brought to a hospital for medical treatment (he is seriously bruised on his head and neck and suffered damage to his cornea). Following an appeal to the district court, he was released to house arrest in the middle of the night.

Abu Alqian moved to Tel Aviv a couple of months ago from the southern Bedouin town of Hura in order to save some money before starting to study psychology later this year. He was working two jobs, at Burger King and in a supermarket, approximately 20 hours a day, he says. The attack by the police officers threw a wrench in that plan — he says he no longer wants to return to Tel Aviv — and that is exactly where a wildly successful crowdfunding campaign stepped in.

Tuesday morning, the Negev Coexistence Forum (where I work) launched a crowdfunding campaign for Abu Alqian. The goal was to raise NIS 40,000 (just over $10,000) to fund his psychology studies. That bar was met within less than 12 hours, as hundreds of Israelis donated to support Abu Alqian. 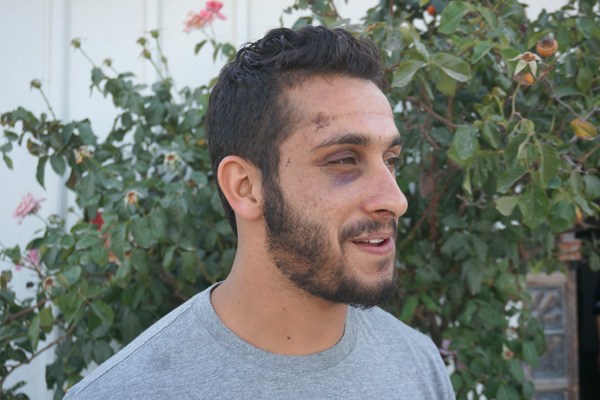 Overwhelmed by the success, the NCF decided to try and double the goal, in order to raise some funds to cover Abu Alqian’s legal defense costs. By the time of writing, over 200 percent of the original goal’s sum had already been raised.

While the struggle against police violence in Israel is only in its infancy , this tiny project served as proof for many Arabs and Jews that there is hope out there. It gave Israelis a way to directly support a victim of police brutality, in a very constructive way.

Among the comments made by supporters, people wrote “I would be happy to show Mayasem that there are different people, people who seek peace”; “Mayasem, good luck with your studies”; “Thank you for the opportunity to support Mayasem”; “I am so ashamed, hope we will be able to fix this”. More than 800 Israelis already supported the project.

While the Israeli public seems to still be shocked by Sunday’s events, according to some reports by Israeli media, the Department of Internal Police Investigations had already finished its inquiry and is about to close the case against the alleged attackers. While Mayasem was still on house arrest until Thursday and banned from Tel Aviv for another week, all the involved policemen are free.

Abu Alqian went on the radio Wednesday and thanked all his supporters, stating that it gave him a bit of relief and that he was overwhelmed by the warm embrace he received from so many people. And still, he says he has no intentions to ever come back to Tel Aviv.

Michal Rotem, based in Be’er Sheva, works for the Negev Coexistence Forum for Civil Equality and is a Hebrew-language blogger on Local Call.