The precarious situation of surrogate mothers in Nepal carrying babies for Israelis, as well as the ethical questions surrounding surrogacy in the developing world, should be treated with the utmost seriousness. But what does Israel’s interior minister do? He laughs at them. 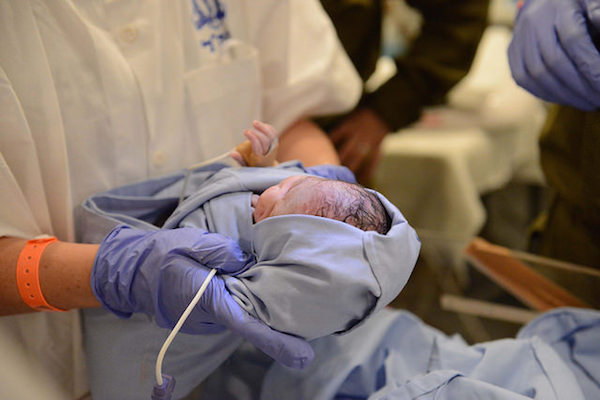 A baby is delivered at the Israeli army’s field hospital in Nepal, April 29, 2015. (Photo by IDF Spokesperson)

Saturday’s horrific earthquake in Nepal has dominated the news here in Israel, not only because Nepal is a popular travel destination and around 2,000 Israeli backpackers were airlifted out of the area in recent days, but primarily because of the 100 or so surrogate mothers carrying babies for Israeli gay couples and single parents.

Only heterosexual couples can legally turn to surrogacy in Israel, so homosexual couples look to other countries – and generally look eastward to India and now Nepal, since it is much cheaper than the West.

Israel announced Sunday it had decided to airlift 26 newborn babies born to surrogate mothers (they all arrived by Tuesday), but it is not so clear what will happen to the women there who are still pregnant with surrogate babies, living in the aftermath of the quake.

According to a report in TIME, there are around 100 Indian women in Nepal who are surrogates for Israelis. The Justice Ministry decided to authorize the airlift of only a handful of these women, those past their 35th week of pregnancy. It is unclear how many are expected to arrive, but some reports say four women. The Interior Ministry spokesperson was asked for details and comment, but responded that “the matter is still being worked out so no information is being provided at this time.”

The story has turned the spotlight in the Israeli media on the need to improve the legal ability for surrogacy in Israel and the ethics of seeking surrogacy abroad, since most if not all the surrogate women are poor and acting out of desperation. (An informative article on the matter in Haaretz by Aeyal Gross can be found here).

It raises difficult questions about what it means for an underprivileged woman to rent out her womb. The images of babies being flown into Israel with their relieved dads, while the women who carried and birthed them are left behind, have been especially cruel.

This sad and sensitive situation was exacerbated by Interior Minister Gilad Erdan, who gave an interview on the matter on Channel 10’s evening news show, “London and Kirschenbaum,” on Monday. I subtitled a short clip:

What I find so repugnant about this clip is that Erdan allowed himself to laugh at the joke — that anyone can chuckle about this on live TV. The host, Mordechai Kirschenbaum, was obviously being facetious and critical of Erdan, but what these women have to go through is no laughing matter, and what African refugees are going through should not be the butt of a joke either.