The turnaround by Israel’s rabbinical leadership, which in the past has acted as a sane counterweight to messianic Third Temple activists, is a worrying sign. Netanyahu has regularly dismissed suggestions that Israel wants to alter the status quo on the Temple Mount as ‘incitement.’ 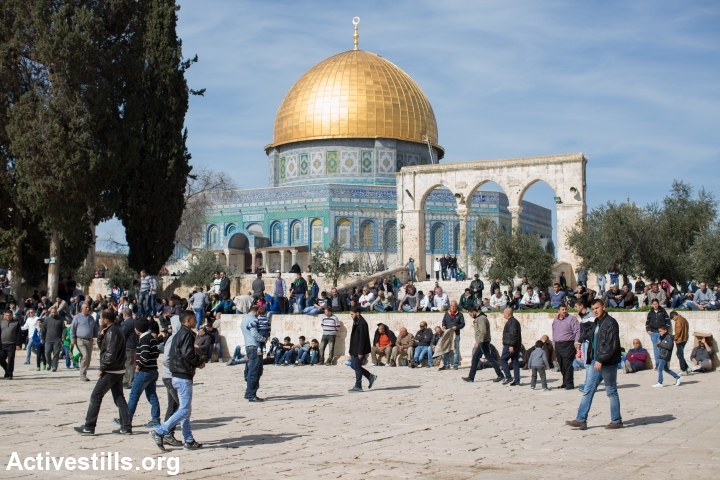 Muslim worshipers walk and gather on the Haram al-Sharif/Temple Mount with Al-Aqsa Mosque in the background, Jerusalem. (Faiz Abu Rmeleh/Activestills.org)

One of the biggest drivers of violence in Jerusalem in recent years has been Palestinian and Muslim fears that Israel is altering, or at least that it intends to, the status quo on the Temple Mount/Haram al-Sharif — the holy esplanade which once housed the Jewish temple and today is the site of the Al-Aqsa Mosque and the Dome of the Rock.

Israeli Prime Minister Benjamin Netanyahu over the years has taken to describing the articulation of such fears as incitement. Indeed, rumors and fears surrounding Al-Aqsa Mosque have been behind numerous outbreaks of violence, including the 1929 Hebron Massacre, but that doesn’t mean those fears are baseless. At the very least, they are constantly stroked by Israeli officials and organizations with close ties to the government expressing messianic views.

(I published an extensive list of such provocations here late last year. They range from the acting foreign minister advocating raising an Israeli flag on the Temple Mount to government ministers publicly advocating for the construction of a Third Temple.)

This week saw yet another provocative statement from an unexpected source: Israel’s chief rabbi.

Israel’s Chief Ashkenazi Rabbi David Lau told the Knesset Channel (Israel’s equivalent to CSPAN) earlier this week that he would like to see a Third Temple built, and expressed his belief that the Muslim holy sites located on Haram al-Sharif/Temple Mount need not be demolished in order to make room for it.

Asked directly by journalist Nehama Douek whether he would want to see the Jewish Temple rebuilt in the same spot where it was previously located, Rabbi Lau answered, “yes.”

Rabbi Lau’s argument that there’s room for all three monotheistic religions on the Temple Mount will hardly assuage the fear that messianic Jews plan to destroy one of Islam’s holiest sites. For those who fear such a disaster, any minor change that Israel makes in the Western Wall Plaza below is enough to stoke paranoia, and the extensive archeological tunneling Israeli groups are performing in the area add another layer of fear regarding a monopolistic view of history and religious attachment.

One reason that Rabbi Lau’s public declaration was so surprising, however, is the role that Israel’s chief rabbinate has always played as a sane counter-weight to religious nationalist groups that advocate visiting and praying on the Temple Mount/Haram al-Sharif, in addition to making preparations for a Third Temple. Chief rabbis have always argued that it is forbidden for Jews to enter the Temple Mount complex for religious reasons, specifically in order to inadvertently walk over areas that laypeople were forbidden from entering.

What his statement does indicate, however, is that the views of groups like the Temple Mount Movement and Temple Mount Faithful are becoming more and more mainstream in Israeli society.

Another poll late last year found that 38.5 percent of Jewish Israelis think the status quo forbidding Jewish prayer in the complex should be canceled. One of the most prominent Temple Mount activists in Israel was just made a member of Knesset for Benjamin Netanyahu’s ruling Likud party, government ministers publicly associate themselves with messianic Third Temple movements, and those movements hold public rehearsals for sacrifices to be performed when the Temple is built.

“The dangerous coalescence of the rise in temple movements, along with growing mainstream support, threatens a delicate administration of the holy sites in Jerusalem,” Betty Herschman wrote in these pages, adding that, “their growing success effectively relies on our own nurturing of such visions. Failure to recognize and challenge this deception could lead to the enflaming of one of the world’s most combustible hotspots.”