Palestinian journalists are increasingly threatened, arrested and interrogated just for doing their jobs. And for the most part, Israeli journalists remain silent. 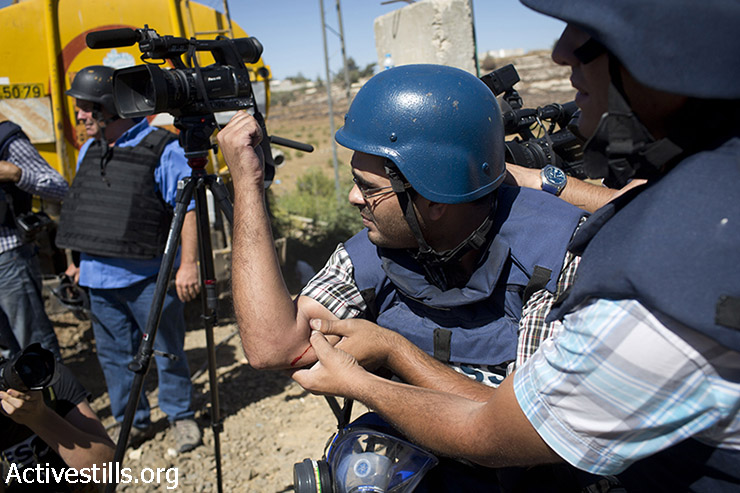 A member of the media holds his arm after being injured from a live bullet while covering Palestinian clashes with Israeli army, July 25, 2014, DCO checkpoint near Ramallah, West Bank. (Activestills.org)

On a Tuesday night in the beginning of April, Israeli armed forces raided a house in the Silwan neighborhood of East Jerusalem. They woke up sleeping family and gave al-Hayat journalist Diala Jwehan a summons to appear for interrogation. Jwehan has been covering the uprising of recent months, primarily in East Jerusalem, and is one in a long list of Palestinian journalists who have been called in for questioning because of their media work – what the Palestinian Journalists Association calls an “Israeli offensive on Palestinian media.”

Israelis love to boast the free press index published by Freedom House organization, which ranks Israel in a relatively good spot with a grade of 70 – although it is the lowest among the category of free countries, but still high. A small detail mentioned in the report, in fine print, is that the index does not include the situation in the West Bank or Gaza. There, the grade given for the same index is only 16 – one of the lowest in the world, and a clear indication of the total lack of free press.

According to a report recently published by the Palestinian Center for Development and Media Freedoms, in 2015 there were 407 attacks by Israeli forces against journalists, some of which were physical assaults (42 percent) and the rest range from preventing access to some places and prevention of coverage, arrests, damaging equipment, using journalists as human shields, and more. These are not sporadic, but part of the daily reality for Palestinian journalists.

Ahmad al-Bitawi, a Palestinian journalist, was convicted in an Israeli military court of incitement that was, allegedly part of his journalistic work. Other journalists, among them Mahmoud al-Qawasme and Mohhamad Qaddumi, are both imprisoned in Israeli jails awaiting trial for the same charge. These tactics are only used against Palestinians journalists, never against Jewish journalists, some of whom publish similar incendiary materials, like for example Amnon Lord, who published a front-page article for the Jewish religious newspaper Makor Rishon a few weeks ago that included the statement, “killing a terrorist without grounds of immediate self defense is a natural situation during war.”

During the month of February, a long list of Palestinian journalists from both Jerusalem and the West Bank were interrogated, among them “Good Morning Jerusalem” producer Nader Bebars, Pal Media in Jerusalem’s bureau chief Ishaq Kasbe, WAFA photographer Ayman Nubani, and many other journalists, photographers, and media technicians.

The television show Palestine Today, which operated out of Bir Zeit, was closed by an Israeli military order on claims of incitement during broadcasts, and several journalists working there were arrested and are still being held by Israeli security forces. In addition, the veteran newspaper Sawt al-Haq wa al-Hurriya, as well as the news website PLS48 that operate inside Israel were closed by summary orders last year. 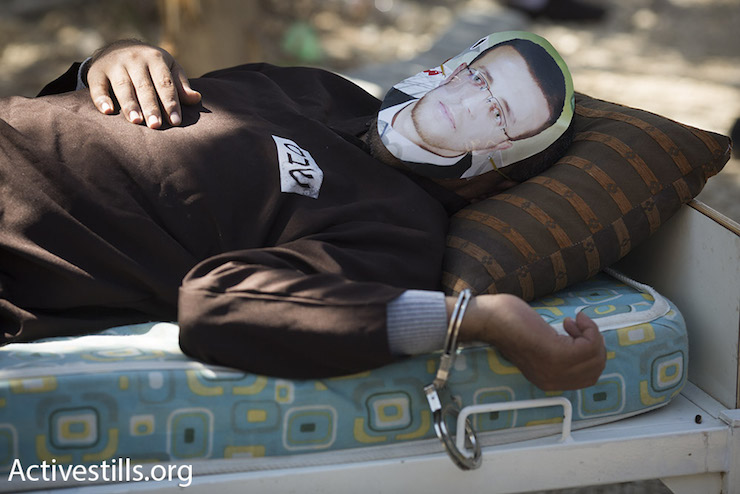 At least three Palestinian journalists are currently being held in Israeli jails under administrative detention, without trial. None of them have been tried in a non-military court, and many believe they were arrested for doing their journalistic work. In the case of another administrative detainee, journalist Mohammed al-Qiq, which nearly reached the High Court of Justice, the judge ignored his work as a reporter and political analyst, chose to place his trust in the confidential materials Israeli security forces presented him with, and ordered to keep him in detention without trial.

The severe damage to freedom of Palestinian press is caused not only by Israel but also by the Palestinian Authority, whose security forces arrest, assault and injure journalists who criticize it or sometimes even Israel. The near total absence of solidarity by Israeli journalists is also disturbing, and considering the sheer volume of violations against freedom of press, it is astonishing that such opinionated journalists remain silent. More and more journalists are being arrested, questioned and threatened, yet there is barely any coverage by Israeli media. The Knesset has a Lobby for the Freedom of Press, but remains silent. The Union of Journalists in Israel could also be much more vocal about it than it has been up until now.

The claim Israeli security forces usually make when detaining Palestinian journalists is that they engage in “incitement.” But the war on incitement is only being waged against one side, against those who are deprived of rights and live under a violent military occupation. According to prisoners’ rights group Addameer, between October 2015 and March 2016, over 148 Palestinians were arrested for Facebook posts. Freedom of speech, which before the current uprising was already limited, is increasingly restricted. As for freedom of protest – it is entirely forbidden under military law in the West Bank.

Journalism is considered the watchdog of democracy. I don’t know what that means under a military regime – but there is no doubt that without the press, the situation would be much worse. Israelis and Palestinians must stand together in support of journalists who are being persecuted and send a clear message that journalists must have the right to do their work without military interference in its content or tone. Just as no one can fathom the IDF interfering in Israeli media content, the same logic must be applied to Palestinian journalism.