The government which makes it almost impossible for Palestinian citizens to acquire building permits is the same one that kicked Givat Amal’s residents out of their homes, all while coddling the settlers in Amona. 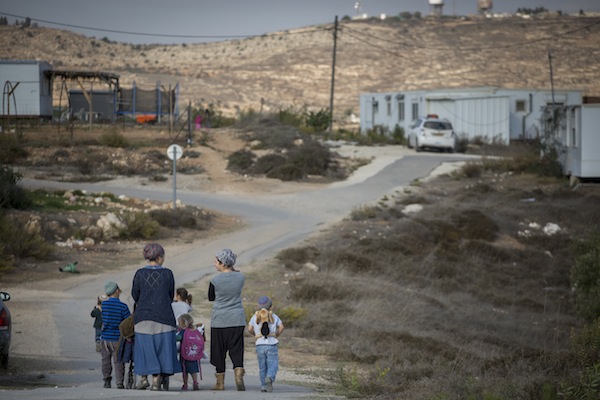 About a week ago I visited a friend who got married earlier this year, a childhood friend who always had the sparkle of success in his eyes. He followed the classic path of high school, work, university, joining the job market, and then the cherry on the cake: marrying and starting a small family. A couple of years before he got married, he started building a house on top of his parent’s home in Kafr Fureidis, and as a law-abiding person who tried as much as possible to keep out of trouble, he refused to lay down a single brick without the necessary permission.

So he began the process of acquiring building permits for his father’s plot. He went through countless bureaucratic procedures and meetings with committees, investing huge sums of money, until he finally succeeded. When I met him recently, I saw the exhaustion and the economic burden of a man who has a good job and yet is still living on the edge.

In contrast to my friend, over 20 years ago a group of settlers took over private land in the West Bank and established the outpost of Amona. The community grew, not just because the government looked the other way, but also because of direct financial support from the state, estimated at many millions of shekels. Over the last few years, the state has also done all it could to stall every Supreme Court decision that ordered the evacuation of Amona’s settlers, even as it was ruled that they were on land that had been stolen from its legal owners, who happen to be Palestinian.

For Prime Minister Benjamin Netanyahu, Amona is a rug that can be swept out from under his seat at the top of the government, as well as a threat to his electoral base. In keeping with his sacred ritual, Netanyahu had to get up in front of the cameras and explain to his voters who the bad guys are in this story: the law, the Supreme Court and the Arabs. His speech was instructive and historical, more than anything he has said about droves of Arabs or arson terrorism.

When I heard Netanyahu’s statements, I didn’t think about the thousands of buildings in Arab towns and villages that had been constructed without permits — 95 percent of which had been built on privately-owned land, unlike the stolen land under Amona. I actually thought about the residents of Givat Amal, who for over 60 years have been fighting for their homes. 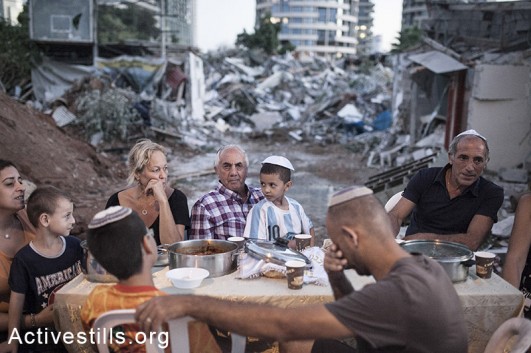 The people of Givat Amal are not West Bank settlers. They’re a group of “second-class” Jewish citizens, immigrants from North Africa and the Levant, who are regarded as having invaded the land of privileged tycoons (which they received from the Jewish state for next to nothing).

All of a sudden, the alliance of the disadvantaged seemed so obvious. It’s clear that the same governing body stands before two deprived populations, from two different cultural backgrounds, one native and the other migrant, both from the East. The goal is to tattoo onto their minds that they are unwanted here, that the place they think of as home will not stay standing in the face of the regime’s bulldozers, that the simple, natural sensation of feeling at home will never be available to them. The whole country is in the hands of a privileged elite, rich and aggressive.

Tired, fearful and worried, the prime minister announced that there will not be two separate legal systems in a democratic country and that he had issued immediate instructions for the law to be applied to everybody, Arabs and Jews. Therefore, alongside the evacuation of Amona, the government would also make sure to speed up the process for demolishing illegally-built structures in the Negev (Bedouin), in Wadi Ara (Arabs) and the Galilee (Arabs).

The prime minister omitted from his speech the documented fact that there is a simple solution to the problem of illegal construction in Arab society, which members of the Joint List proposed in the Knesset at the start of the year. The main elements of the proposal included halting demolitions for a year, starting a process of retroactively issuing permits in suitable cases (God forbid not for the stolen private land Amona is built on), and a call on Arab public leaders to stop all illegal construction. The proposal was completely ignored by the prime minister.

Netanyahu’s disregard for the disadvantaged members of the population comes in an era in which political radicalization is a successful means of strengthening a discriminatory, unequal and undemocratic government. It’s an age in which there are no agreed-upon solutions, no middle ground from which to build a free, successful and progressive society — a society which gives its people hope instead of giving them pain, divisions, hatred and war. It may take time, but contrary to the prime minister’s expectation that he will rule aggressively, using force and illegitimate means, his incitement against the native population and his neglect of the weak will be the key to a future of justice and equality.