Netanyahu reveals one of the motivations behind the ‘Jewish Nation-State Law’: to stop Palestinians from ‘exploiting’ family unification procedures to join their families in Israel. 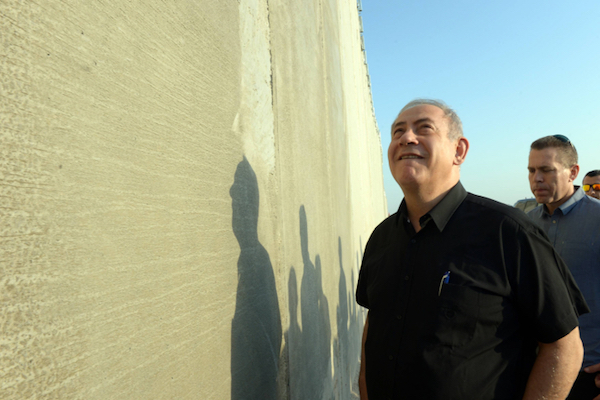 Many people have been asking what harm Israel’s “Jewish Nation-State Law” actually causes — what rights it infringes on, and how it changes the current situation in Israel, in which Jews are already a privileged class. I myself, wrote just last week that the law’s power lies more in its declarations than its legal ramifications.

Prime Minister Benjamin Netanyahu explained on Sunday exactly how the law harms an untold number of non-Jewish Israeli citizens, specifically, Palestinian citizens of Israel who are married to or who are immediate relatives of Palestinian residents of the West Bank and Gaza.

Speaking at the start of the weekly cabinet meeting on Sunday, Netanyahu said:

The Nation-State Law, first of all, entrenches the Law of Return. It raises it to another level and this law, of course, grants an automatic right to Jews, and only to them, to come here and receive citizenship. The Nation-State Law, for example, prevents the exploitation of the family reunification clause under which very, very many Palestinians have been absorbed into the country since the Oslo agreement, and this law helps prevent the continued uncontrolled entry into Israel of Palestinians. It could be that this law will also be able to assist us in blocking the future entry of labor migrants.

In other words, one of Netanyahu’s primary motivations in passing the Jewish Nation-State Law was to prevent Palestinian families from living together.

Family reunification is a procedure by which Israeli citizens can obtain residency and eventually citizenship for their immediate family who are not citizens.

For Jews, the procedure is moot because Jews can already obtain citizenship under the so-called Law of Return. For non-Jewish, non-Palestinian family members of Israeli citizens, family unification can be an arduous process but not all that unlike similar procedures in many other countries.

If your spouse is Palestinian, however, a demographic almost exclusively comprised of Arab-Palestinian citizens of Israel, you are barred from bringing your family member into Israel and obtaining status for them as if they were Russian, Danish, Nigerian, Mexican, American, Egyptian, or virtually any other nationality.

That ban was first put in place 15 years ago and justified as a security measure. Technically, it is an “emergency regulation,” a category of laws that are only valid as long as Israel is in a “state of emergency,” which it has been for the past 70 years. If the state had argued honestly that the point of halting family unification for Palestinians is borne of demographic and not security concerns, the High Court would have struck it down as unconstitutional.

What Netanyahu said on Sunday is that now, with the Jewish Nation-State Law on the books, he and his government can finally be honest about their intentions. Israel does not want more Palestinian citizens — not due to any security concerns but simply because it doesn’t want more Palestinians living in Israel. With a constitutional amendment declaring Israel to be the Jewish state, where only Jews have a right to national self-determination, discriminatory laws with exclusively demographic aims are legitimate. Preventing Palestinian families from living together has become a legitimate legislative objective.

In the name of maintaining Israel as a “Jewish and democratic” state, Netanyahu — like Rabin, Barak, Livni, and virtually all of his predecessors — has concluded that demography is one of the most fundamental elements of Israeli national security.