This Holocaust Memorial Day, a group of young Russian-speaking Israelis is calling attention to the stories of their grandparents —  Soviet heroes who defeated the Nazis, living on the margins of Israeli society.

By Edi Zhensker and Berry Rosenberg 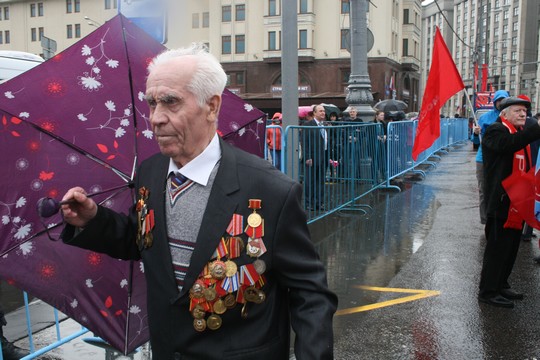 A veteran marches in Moscow, May 2015 (Photo: Haggai Matar)

A lot of us stare at them and wonder: who are these elderly people who speak Russian? What are they wearing on their chest? Who gets so many medals? Many wonder whether it is some weird 90s fashion trend that these immigrants brought with them, and which they refuse to let go of. Others have a hard time pronouncing the word “veteran” and confuse it with “veterinarians,” which hurts them immensely.

The truth is that some of these elderly Russian-speaking people we often see on lined at the supermarket or at our health care clinics were actually combatants in tank, infantry and air force divisions of the Red Army who fought against the Nazis. Some of them bravely stood at the Blockade, the punishing siege the German army imposed on the city of Leningrad (today St. Petersburg), were forced to flee their homes in one of the biggest population transfers in history, “the evacuation,” and joined the partisans or survived the war in territory occupied by the Nazis in the Soviet Union. The Nazis annihilated around 90 percent of the Jews in that area. These veterans lost all their property, their friends and family on their way to the Allies’ victory in 1945.

Tens of thousands of them and their children immigrated to Israel over the years and settled here quietly, without us noticing. Most of them lived and still live in poverty and isolation. Some of them still live among us, utterly transparent, invisible. They are not part of the Israeli discourse, their stories of heroism and pride they carry with them are not part of the State of Israel’s narrative, despite their relevance to the end of World War II and the survival of the Jewish people.

One day a year, May 9, Victory Day over the Nazis, is their holiday. It is the day they emerge from their anonymity and isolation and feel historic pride, whether they were medics in the Red Army, or those who invaded Berlin. It is the day they wear their many medals from the war and go outside, to celebratory marches in the hearts of their cities, to tell their stories. They march slowly, accompanied by relatives, using walking canes or sitting in wheelchairs. In their typical quiet manner, they tell their stories before going back to daily survival and isolation. They enable us to remember their courage and how we are indebted to them, as a people and as a country.

This year for the first time, in honor of Holocaust Memorial Day, we decided to get their stories out to the public, in Hebrew. “Operation Veteran” is a national project we launched to distribute these stories, among other ways by encouraging the combatants’ grandchildren to share their stories on Facebook.

The project includes the documentation of the veterans’ stories and what they went through on their road to defeating the Nazis in 1945. On Holocaust Memorial Day, dozens of veterans will share their testimonies across Israel as part of our cooperation with the organization, “Memory in the Living Room” with Hebrew translations carried out by youngsters of “Generation 1.5.” You can go to the Facebook page in Hebrew called “The Cultural Brigade” and choose one of many events to attend. Also, during Victory Day on Monday May 9, dozens of youth will join the street marches across Israel and hand out flowers to each veteran. 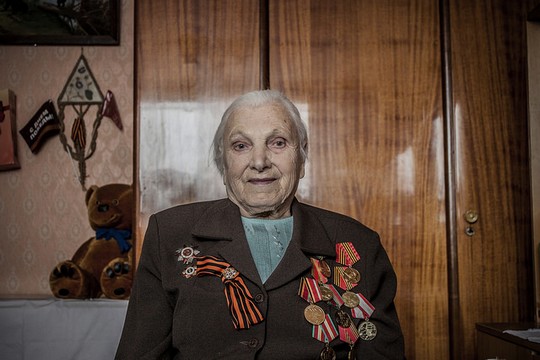 The rest of the year these veterans are silent, invisible. (Illustrative photo by Tatjana Aleksandrovna Veselova CC BY-NC-ND 2.0)

You can read about Yerachmiel Plazenstein, a Hero of the Soviet Union (the highest Soviet decoration), a Chabadnik who singlehandedly killed 50 Nazi soldiers in Crimea, suffered a head injury, survived and returned to combat. Yerachmiel was willing to return the medal in order to immigrate to Israel.

There’s also Lidia Litvak, an Ace at shooting down combat aircraft, with 12 certain shoot-downs on her belt. She is the first female pilot to have shot down an enemy warplane in aerial combat, and one of only two female pilots to have been deemed an “Ace” champion of shoot-downs.

The people behind these stories continue to live among us. They are in absorption centers, in line at National Insurance Institute offices, on the bus to the market, on line at the supermarket or sitting on a park bench. For us they are mainly invisible. But behind each and every medal is a story about soldiers, heroes who defeated the Nazis and lived to tell about it. Unfortunately, with each year that passes, there are fewer and fewer of them around.

We must admit that we too, the 1.5 Generation from the Soviet Union, may have realized too late how important it is to tell the story of our grandparents. But luckily it’s not too late.

Boris (Berry) Rosenberg, 33 from Jerusalem, is a member of the 1.5 Generation, one of the founders of “Veteran Operation” and of the “Cultural Brigade.” The “Cultural Brigade” is a group of young Russian-speaking Israelis from the 1.5 Generation, who were born in the Soviet Union but grew up in Israel. It works to expose Soviet-Israeli culture to the public at large in Hebrew. Edi Zhensker is a blogger for +972′s sister site, Local Call, where this article was originally published in Hebrew. Read it here.