Through a regime of permits, licenses and visas, Israel controls who guides most tourists to the Holy Land, what they are told and where they spend their money. Can Palestinians use tourism to take back the discourse on occupation? 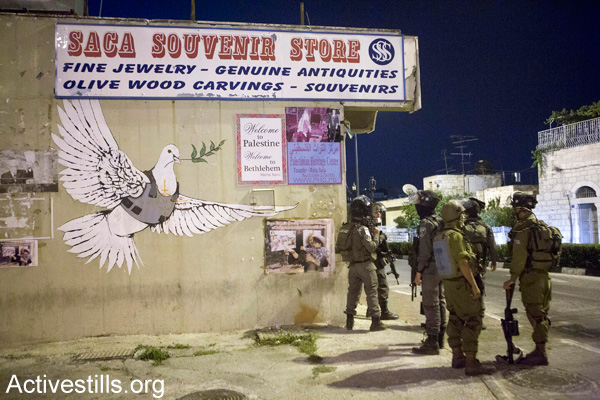 Israeli soldiers stand outside a souvenir shop for tourists in Bethlehem, July 12, 2014. (Activestills.org)

Israel’s occupation and colonization of Palestine is not limited to its military elements — the occupation is also manifested in Israel’s use of tourism as a political tool. Tourism is used to strengthen Israel’s position as occupying power, to maintain its domination over Palestinian land and people, but also as an instrument for the dissemination of propaganda to millions of tourists, including politicians, community leaders and journalists who sometimes receive free-of-charge first-class tours to Israel.

All of these trips are accompanied by well-drilled Israeli tour guides spread the official Israeli narrative among visitors. This narrative is crafted through the omission of crucial information, and by ensuring that there is little or no contact between visitors and local Palestinian communities.

Simply put, Israel knows that being exposed to the present and historical realities of the occupation would have a transformative effect on the majority of tourists to Palestine. Such tourists might then return to their home countries as opponents to Israel’s oppressive policies against Palestinians — the opposite effect of the tours sponsored by pro-Israel organizations. With that in mind, in 2008, an Israeli branding campaign was developed for the tourism industry to deflect attention from the occupation.

“Millions of tourists come to Bethlehem, Palestine, every year and, without talking to a single Palestinian, return home as enemies of Palestine and ambassadors of Israel,” explains Rifat Kassis, coordinator of Kairos Palestine, a Palestinian Christian anti-occupation movement. Additionally, the maze of unequal laws and restrictions gives Israeli tour companies an unfair advantage in their ability to provide seamless service for their groups. Israel follows a two-tiered strategy: firstly to invest millions of dollars into its tourism market in order to attract the maximum number of visitors; and secondly to cripple the Palestinian market as much as possible. Very few permits to build or convert buildings to hotels were granted by the Israeli authorities to investors in the Palestinian sector in the last two decades, while Israeli authorities issued at least 15 military orders and regulations related to tourism since 1967.

These orders raised the requirements for licensing and functioning of tourist institutions without availing those institutions of the means necessary to meet the required improvements. As a result, many Palestinian tourism firms faced the often-insurmountable challenges of unequal competition with Israeli firms or demotion to lower tourist grades.

Without the ability to accommodate additional tourists during peak season, Palestine is deprived of the opportunity to host tourists for longer periods of time, resulting in visitors taking only short day trips in Palestine. This has negative implications for the local economy.

In addition, very few Palestinian tour guides receive permission to lead tours in Israel. Israeli authorities issued 42 permits in 2005, the only time such permits were granted. Today, only 25 of those 42 guides are still operational, compared to 8,000 Israeli guides who are licensed to lead tours by the Israeli Tourism Ministry. 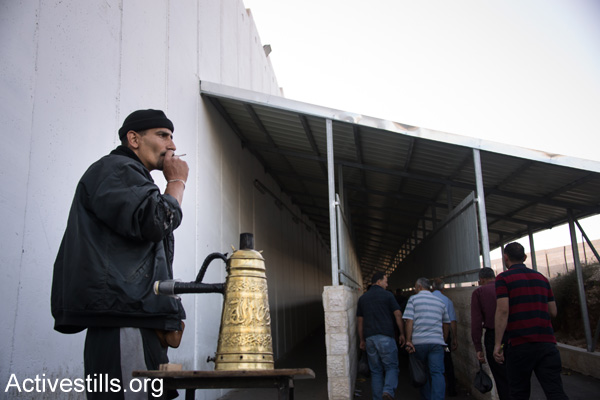 Other Israeli restrictions are applied directly on would-be tourists to Palestine. When Israeli travel agencies apply for visas for their clients, they simply submit names and passport numbers and their requests are generally met without delay. In contrast, Palestinian agencies attempting the same are met with administrative obstacles, and cannot guarantee that their visa requests will be accepted.

Furthermore, if tourists tell Israeli border control agents that they plan to visit Palestine, they are often delayed for questioning by Israeli authorities. Some deported.

Moreover, Israel has installed a web of hundreds of permanent checkpoints and other military obstacles which restrict movement both inside the West Bank and across its borders, which Palestinians and foreign tourists alike are forced to negotiate. Dozens of “flying checkpoints” are erected without warning throughout the West Bank on a weekly basis. Ra’fat al Shomali, a Palestinian tour guide, emphasizes the crippling impact of these checkpoints. Often he does not have the time to finish his tours on account of being forced to wait at checkpoints.

Israel is also attempting to exclude Palestinians from the crucial Christian pilgrim market. As the Los Angeles Times reported on tourism in Bethlehem:

Israel has spent millions of dollars refurbishing Christian sites in Israel and trying to create new ones… The [Israeli] Tourism Ministry is also promoting a Christmas Eve alternative to Bethlehem — which is under control of the Palestinian Authority — by inviting pilgrims and foreign diplomats to the Israeli city of Nazareth to enjoy a Christmas market, parade and fireworks…

Palestinians [emphasize that, as a result] they are being cut out of a market they once dominated. Palestinian tourism officials say Israel is discouraging visits to areas administered by the Palestinian Authority and is promoting attractions in other [de facto annexed] parts of the West Bank, such as the baptismal site at the Jordan River.

“We have more sites on our side, and Israel is using them to develop their own tourism, leaving us with a smaller piece of the pie,” explains former Palestinian Tourism Minister Kholoud Daibes, contending that Israel collects 90 percent of pilgrim-related revenue. “They are promoting occupied territory as part of Israel.”

Israel’s grip on Palestinian tourism allows it to control the discourse, terminology and language through which foreigners understand Palestine and the occupation. Palestinian tourist institutions can play a crucial role in retaking that discourse, by introducing and establishing their own language, terminology narrative, and by simple person-to-person advocacy. Come visit Palestine!

Correction:
A previous version of this article mistakenly attributed a quote about Israel’s attempts to compete with Palestinians for Christian tourism to CAMERA — Committee for Accuracy in Middle East Reporting in America. The article has been corrected to reflect that the quote was actually from a Los Angeles Times article, portions of which appeared on the CAMERA website as part of its critique of the article. The irony of misquoting an organization dedicated to “accuracy in reporting” is not lost on us.

Amjad Alqasis holds a LL.M. in international public law and is a human rights lawyer, legal researcher, and a member of the Legal Support Network of BADIL Resource Center for Palestinian Residency and Refugee Rights. For the last four years he was the coordinator of BADIL’s international and legal advocacy program. Since August 2014, Amjad has been an advisor at Al Haq Center for Applied International Law. He has published several articles and books on various topics concerning the Palestinian-Israeli conflict.