The draft law, which passed the first of three votes on Monday, would allow the expulsion of Arab MKs from the Knesset. It is one of several recent steps by the Netanyahu government to limit Palestinian political participation. 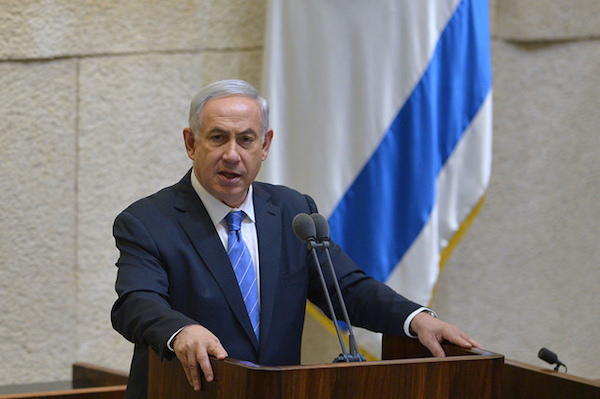 Minutes before leaving for the spring recess Monday night, Israel’s Knesset passed the first reading of a law allowing legislators, with a three-quarters super-majority, to expel other members of Knesset for making statements they deem beyond the pale. The law is widely understood to have been drawn up to specifically target Arab-Palestinian members of the Knesset, particularly of one faction, a legislative move that represents a serious and worrying escalation of populist tactics normally brought out only in election seasons.

The bill, which is a proposed change to Israel’s equivalent of a constitutional amendment, will now go back to committee and must then pass a second and third vote becoming law. Since the election in which Benjamin Netanyahu re-assumed power in 2009 and through the progressively rightward leaning governments he has led ever since, Jewish Israeli politicians have attempted to disqualify or suspend Palestinian-Arab members of Knesset from the Balad faction at least half a dozen times.

The latest attempt, which resulted in the suspension of the party’s entire slate of MKs, was not enough it seems. On a separate track, it is now clear that the Supreme Court will continue to overturn populist maneuvers aimed at disqualifying candidates from running for office in the first place. So now the entire government, from the prime minister on down, is trying to craft a new, far more worrying tool to effectively expel lawmakers whose ideologies and views they find objectionable.

The bill advanced on Monday would permit a simple majority of 61 members of Knesset to initiate suspension proceedings against an MK for one of three offenses, including simply making a public statement to the effect of: negating the existence of the State of Israel as a Jewish and democratic state; incitement to racism; and supporting an armed struggle against the State of Israel.

If the “Knesset Committee” finds the MK guilty of acting on or making statements that cross those red lines, it can refer the case back to the full Knesset where a 90-vote supermajority can suspend them indefinitely. If that happens, the “suspended” MK would lose their seat, which would be filled by the next person on the party’s election slate. Unlike disqualifying a party from elections, however, the Supreme Court need not approve the expulsion of an MK under the new law.

“This is a clear instance of the tyranny of the majority, whereby the political majority exploits its power against a political minority,” the Association for Civil Rights in Israel wrote in a position paper on the proposed law earlier this month.

Politics and political power have never been accessible to Israel’s non-Jewish population — more than one in five Israeli citizens. From the early days of the state when Arab citizens were ruled under a parallel military government to the outlawing of political movements as recently as a few months ago, Israeli authorities have always been very cognizant of the danger that full political participation by the country’s non-Jewish population could pose to the idea of a Jewish state, and the façade of democracy that legitimizes its ethno-religious supremacy.

The political climate in Israel these days feels like a retreat from the ideals of the Oslo era. In its place militant nationalism seems to be rapidly encroaching on what once seemed like a deceptively safe space for opposing the litany of injustices that occur when a powerful ethno-religious majority insists on maintaining its privilege. The new law — along with others like the NGO bill, which aims to paint human rights organizations as foreign agents of hostile powers — is clearly part of a trend that pushes back against those ideals of coexistence, ending the occupation, and recognizing Palestinian political aspirations and rights.

“The bill provides an additional tool to further push the elected representatives of the Palestinian minority in Israel to the political margins,” Attorney Nadeem Shehadeh of Adalah, an Arab civil rights group, warned in a letter to Israel’s attorney general, state prosecutor and the chairman of the Knesset Constitution, Law and Justice Committee last month.

When you deprive somebody of the right to be elected, you are depriving an entire population of the right to lawfully elect representatives. Taking away an already marginalized group’s avenue for airing their grievances and seeking remedy democratically is nothing short of a recipe for disaster — even violence. Israel’s Supreme Court recognized as much when in 2002 it ruled against the disqualification of radical right-wing politician Moshe Feiglin.

Justice Edmund Levy, who later wrote an infamous report arguing that there is no occupation, wrote at the time that, when the majority “deprives the minority of its right to compete in democratic elections, there is but a short distance between [such] actions and forcing the minority to search for other manners of influence and expression, even if they constitute prohibited activity.”

Benjamin Netanyahu has been known to kill problematic legislation in recent years, sometimes as a result of international pressure, and sometimes in order to save his coalition. This bill, however, seems to be drawing little international attention and enjoys the full support of the government. The likelihood of it passing seems high at the moment, although that could change.

If it does pass, it is not clear the current Knesset could muster the requisite 90 votes to actually expel an MK, and whether the Supreme Court would uphold that decision. This is one to watch.