Dissent means going against the majority when you believe the majority is wrong — and not just to be contrary. That means being unpopular almost by definition; the majority will never send us flowers. 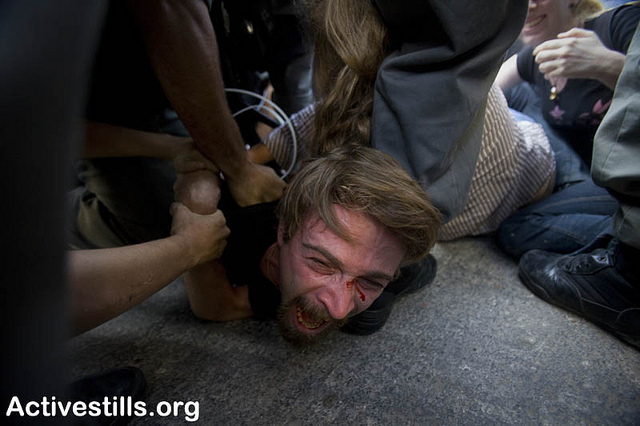 Israel police arrest a left-wing protester during a demonstration against settlement in the East Jerusalem neighborhood of Silwan. (File photo by Oren Ziv/ Activestills.org)

My colleague Mairav Zonszein has written an eloquent piece in The New York Times decrying the state of dissent in Israel, lamenting the persecutions and constraints on those who criticized the latest Gaza war from the left. She points to a number of disgraceful examples.

The article has generated debate, as observed here. However, much of it breaks down along disappointingly predictable lines: those further to the right, such as Tablet Magazine, attack her observations; those on the far left, like Mondoweiss, defend her. The Right rolls out the knee-jerk defense of everything Israeli: lumping the falsehood of the accusation that Israel stifles dissent right along with the falsehood of any culpability for Israel in the conflict at all.

The Left jumps to affirm any critique of Israel, as packaging all criticism together will serve the mission of proving Israel’s culpability in the conflict.

But freedom of expression is a separate issue, and Israelis should analyze it substantively, not as an automatic extension of their “left” or “right”-ness.

Read Mairav’s response to the criticism

No, Israel is not China, not Iran, and not even Azerbaijan. But the Right should take no comfort in that; the Right must not use such unsavory comparisons to justify or trivialize those terrible things that did happen.

But I think some on the Left have mis-characterized these real issues in a distracting way. If Israel was a society that completely controlled or stifled expression, censoring or shutting down websites, closing newspapers or arresting journalists, it would crush both criticism of and information about the conflict. There might be no protest against Israeli policy at all. Although existing criticism has not ended the occupation so far – at least we know that there is a vocal, organized and articulate community of Israelis searching for ways to change course.

Thus a left winger like Noah Efron, looking at it from a very sober perspective, pointed out in Haaretz that Israel is clearly not smothering dissent in ways described above.

Jumping to the convenient accusation that Israel as a state conspires to silence dissent, Efron argues in a point I take to heart, ignores the fact that anger against the Left during the war came largely from regular people. It’s an easy deflection of self-criticism: maybe the Left should think about why it has failed to make its case more convincingly about what’s wrong with Israeli policy.

Here are a few more problems. Citing the incident of violence at a demonstration ignores numerous other examples that I believe were more common.  After that one demonstration, the next week police were out in force, in a tight ring around several dozen frenzied right-wing counter-protestors who were jumping and screaming awful things across the street from the larger anti-war group. The riot police gave no quarter: they stood inches away from the right wingers and when one broke ranks and tried to cross the street, I watched three of them unceremoniously muscle him back far behind the lines with an aggression that I did not enjoy witnessing; but as a dissenter, I certainly felt protected. I see little value in neglecting this side of the situation, which recurred at several other demos I attended and were more of the norm. 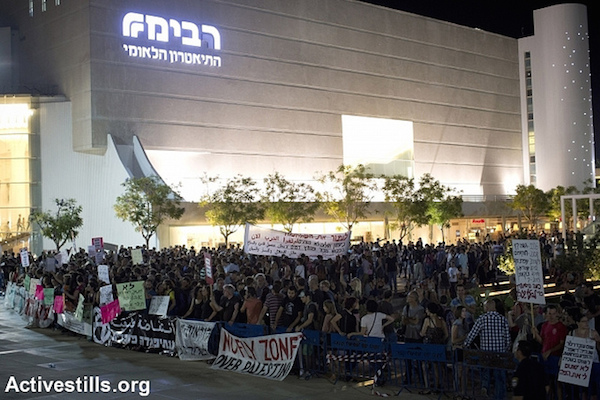 Left-wing activists take part in a protest against the war on Gaza, in central Tel Aviv, July 19, 2014. Right-wing activists tried to attack the leftists during the protest; police arrested at least five right-wing protesters. (Photo by Activestills.org)

My memory goes back to the second Intifada, those horrible days of shaking from suicide bombings by day and dreaming at night about what Israeli forces might or might not be doing in Jenin – waking in sweat and panic and tears.

I sought out demonstrations then too. They were silent, sad and small. I remember a few dozen people, not thousands or even hundreds, as during the recent war. Right wingers apparently didn’t feel much of a need to hold counter-protests, so silent and ineffective, or self-censored, was the pro-peace voice back then.

That silence stretched from 2000 to 2009 – practically a lost decade. Then Cast Lead happened and something snapped. Suddenly people were finding each other – groups, not individuals, ideas, initiatives. We started +972 Magazine because numerous people wanted to speak out with greater force and passion and (god help us) for no pay. The alarmism in Israel this summer about silencing dissent shows short memory of a deeper kind of silence in the recent past. In some ways, the anger shows the Left is more active and energetic and vocal than back then.

What is very worrying are reports that Arab/Palestinian citizens of Israel have had jobs or positions threatened or lost due to political positions they have expressed. Mairav’s piece doesn’t mention this part, but the problem actually belongs to a long history of systemic discrimination against Arabs, finding new manifestations. Neglecting this problem in favor of the distasteful pushback against Jewish dissenters actually minimizes the real problem of intolerable inequality between Jews and Arabs in Israel.

Real, state-sponsored limits on freedom of expression in fact have started by targeting Arabs. I speak of legislation such as the Nakba law. Together with the boycott law and the NGO law, these are truly dangerous systems established through state authorities, quietly, through boring technicalities easily dismissed in the general public. Call them the banality of eroding freedoms and they are in my opinion far more dangerous than a few frenzied thugs, precisely because they are forgettable.

Lamenting extreme incidents of individuals diverts attention from the more dangerous, far more permanent mechanisms that have been under construction for two years already.

Those laws are a dangerous harbinger, but still they haven’t yet truly stopped most of us from expressing opinions freely.

Beyond the law, what about the generally hateful, hard-line social environment? Don’t these constrain the Left through subtle social pressure, arguments with family and friends, angry messages on social media, quiet rejection? Possibly.

But what is dissent? It is going against the majority when you believe the majority is wrong (not just to be contrary). That means being unpopular almost by definition; the majority will never send us flowers.

If that’s enough to intimidate and silence you, well, maybe you’re just not up to the task. If we really believe what we say, we need to face the fire. My heroes are those who fought for their beliefs even at great personal cost, and they weren’t silenced.

I’m no hero –I prefer to avoid jail, and I don’t even want to lose friends or family, in the worst way. I cried one week during the war when three different friends were angry at me for my political beliefs. But there’s value in that too: it forces me to check myself and say, I’m paying a painful price for these beliefs – do I still stand by them? Could I be wrong? Sometimes I wish I was with the majority; it would be easier.

But if we test those beliefs and emerge standing by them, by god I’m willing to sacrifice some peace of mind for a greater peace.

We make the majority angry because we insist on self-criticism as much as, or more than, criticizing the so-called enemy. Most people would rather be proud.

I’d rather be proud too. But until that day, I’ll content myself with being tough. Left wingers in Israel should maximize the legal space Israel does by and large (still) leave for dissent, and suffer the social stigma of opposing occupation – with pride.