What does it mean when the Israeli mainstream elite questions the two-state solution, which up until now has enjoyed practically unquestioned stature in Israeli society? An analysis.

Israel’s Channel 2 aired a lengthy item (starting around 30 minutes in) on Friday evening, asking a shocking question: Is the two-state solution still viable? This question is already a cliché among various shades of the Left. It started some years ago when desperate two-state activists hoped the Israeli public could be frightened by the encroaching concept of one state, to get a move-on with two-state negotiations. When that didn’t happen, a more heated debate took root, about whether to abandon the attachment to the two-state concept altogether in light of changing reality on the ground, and consider other models — usually some form of confederation. Neither of those angles has managed to generate urgency among either the complacent Israeli public (complacent at least when it comes to the conflict), or within the general public discourse.

Then along comes Danny Kushmaro, the much-loved anchor of high-rated Friday night prime time news, on Channel 2 — the highest rated television station. The fact that the question was targeted in such a precise manner, and asked with little hint of political bias to the left or the right by an absolutely mainstream presenter represents a surprising level of attention devoted to a topic that so many prefer to avoid. It might be too much to consider this a breakthrough – but it does mean that the question is no longer a marginal argument within an isolated Left, talking to itself.

Kushmaro consulted with figures on both the Left and the Right, including Yossi Sarid, Meron Benvenisti and Zeev Elkin (Likud Beitenu, deputy foreign minister). It is particularly poignant to see Sarid, former Meretz granddad, former education minister and highly associated with the two-state camp, say how skeptical he is becoming about whether it is realistic anymore. “It could be,” he says, with obvious discomfort, “that the train has already left.” 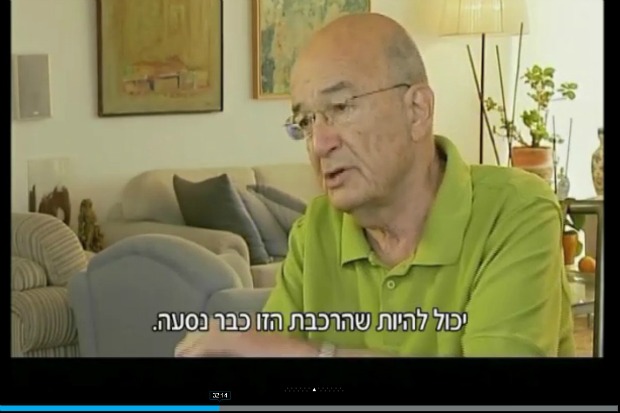 “It could be that the train has already left,” Yossi Sarid, (Channel 2 screenshot)

Kushmaro then ventured to the other side. Veteran Palestinian pollster Khalil Shikaki explained that even though Palestinians still pay lip service to the two-state concept, they are increasingly convinced it will never happen. That’s because, “no one wants it, but it is the reality. We, Israelis and Palestinians live in a one-state reality.”

The item explains that Palestinians are airing ideas like this more and more, “even those who were once two-state figureheads.” These include Abu Ala (Ahmed Qurei), the former Palestinian prime minister who was associated with the Oslo process. The latter is shown talking about the failure of the two-state solution and saying, “there will be no  alternative but one state. No alternative.”

“The world is closing in on us,” says a Palestinian man in a bright pink polo shirt on the street. “If we have the same rights, the same life and equality, so why not?” It is not clear whether he means the same rights he has today, or the same Israelis enjoy – I believe he probably meant the latter. Another man says that given the predicted failure of any future negotiations, “we’ll ask [to be ruled by] Israel. It’s easier for us. If Israel will rule, it will be easier for us in this situation.”

Maybe Palestinians have tasted democracy enough to become convinced that what the PA is offering them, never mind Hamas, is unsalvageable as a foundation for democratic government. Israeli racism? It’s better than Israeli occupation, and they probably feel can live with it as long as there are democratic foundations to demand better. Maybe for them, Israeli rule cannot possibly make their status quo worse, but at least it offers the possibility of something many of them simply lack: citizenship. Somewhere.

Tzipi Livni is presented as the lone two-state warrior fighting against a wall (so to speak) of cynical politicians in her government. She states that she is convinced Netanyahu wants negotiations to end the conflict. I’m not.

Zeev Elkin meanwhile was cagey, musing that no one can predict the future. Meron Benvenisti – a left winger – is convinced that two states will never happen.

Perhaps the most surprising moment involves the closing lines. Kushmaro who, remember, is a mainstay of mainstream Israel, ends thus:

Maybe it really is time to think of alternate approaches, if there are any. Maybe we really are heading towards a bi-national state. [Although] maybe after some apocalyptic event, Gog and Magog, it will happen, there will be two states here. But today, with continued construction in the territories, with the current Israeli leadership and most of the Palestinian leadership – to their dismay or maybe to their joy – the two-state story seems more complicated, not realistic and is becoming almost impossible [sounds of drilling and images of construction in the background] – with every passing day.

Correction appended: the original version referred to Abu Ala (Ahmed Qurei) as a former President of the PA – he was prime minister.