Israel’s military government is once again rebuked in court over its continued failure to meet the bare minimum of its obligations under the Freedom of Information Act, and moreover must compensate the NGO petitioning to bring it to account. 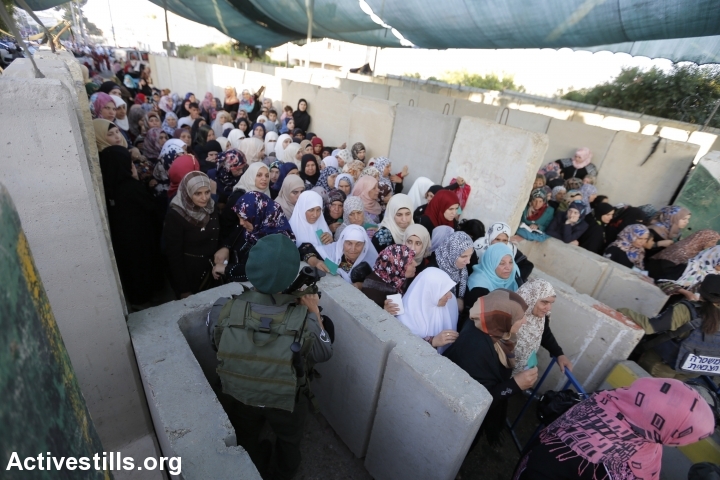 Palestinians cross an Israeli military checkpoint separating the West Bank city of Bethlehem and Jerusalem on their way to pray at the Al-Aqsa Mosque in Jerusalem on the third Friday of the Muslim holy month of Ramadan, July 3, 2015. (photo: Mustafa Bader/Activestills.org)

Israel’s military government, which rules over millions of Palestinians, was hit with a nearly unprecedented court ruling and rebuke this week for flouting its obligation to publish regulations in Arabic.

The Civil Administration — which is a part of the Coordination of Government Activities in the Territories (COGAT), itself part of the Defense Ministry — now has six weeks in which to publish all its outstanding policies and procedures in both Arabic and Hebrew, documents that directly affect 2.8 million Palestinians living in the West Bank. There are currently 25 procedures that have not been published at all in either language, and a further four which have not been published in Arabic.

Citing repeated delays in fulfilling its commitments, the Jerusalem District Court judge also ordered the Civil Administration to pay NIS 30,000 in legal costs to Gisha, the Israeli human rights NGO which since December 2014 has been petitioning the government body to make all its policies and procedures public.

The documents in question dictate fundamental, day-to-day processes for Palestinians in the West Bank, such as obtaining travel and work visas, getting entry permits into Israel and dealing with medical requests. Palestinians’ ability to go abroad, attend weddings, visit sick relatives and live in one place or another are all subject to these procedures.

Access to this information in Arabic is therefore critical for Palestinians subject to Israel’s military regime, in order for them to know what their rights are and how they can claim them. Without this knowledge an occupied population is at the mercy of the whims of the occupier and a crucial passage of legal recourse is blocked off, as illustrated by a former COGAT policy that randomly barred Palestinians from entering Eilat. Until fresh guidelines were issued last year, no one could challenge the rule because apparently no one at COGAT knew where the original copy of the policy was, much less why it had originally been put in place. 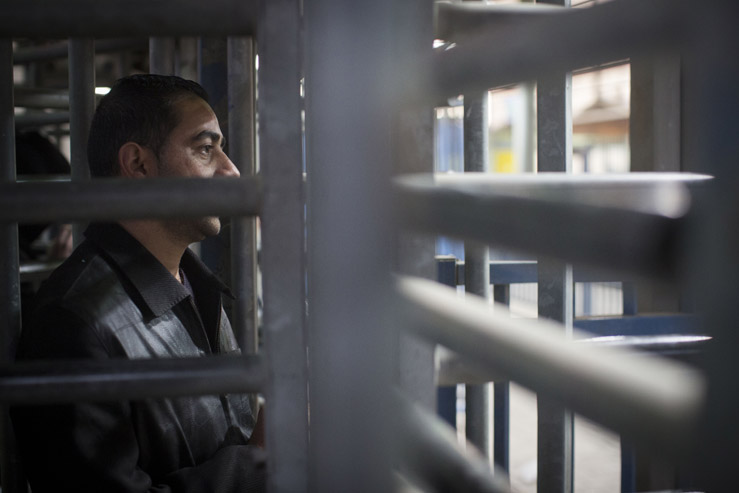 A Palestinian man stands waiting in a locked turnstile in one of the Israeli army’s dozens of checkpoints controlling Palestinian movement. In order to pass through, Palestinians must have a permit from the Civil Administration. The regulations concerning how to obtain such a permit were not published in Arabic. (Activestills.org)

Since Gisha filed the FOIA petition nearly a year-and-a-half ago, the Civil Administration has on five separate occasions — and only under duress from the court — committed to publish all of its policies and procedures, setting various timelines and frameworks for how it would do so. In all five cases, it failed to meet its commitments.

Israel’s Freedom of Information Act is unequivocal about the responsibility of government bodies to publish and publicize their administrative documents that set out how they work and how this affects the public. The Civil Administration is not exempt from this legal obligation, nor does it claim to be — meaning that in its continued foot-dragging over publishing its procedures, it is acting in full knowledge that it is breaking the law. This much was acknowledged by the judge in his order that the Civil Administration compensate Gisha for its legal expenses, according to the NGO.

“The sum of money reflects the Civil Administration’s complete contempt for the law, for the decisions of the court and for their own commitments,” Nomi Heger, director of Gisha’s legal department, told +972 Magazine.

“According to the Freedom of Information law, they shouldn’t have to be asked to publish their procedures — when they have a new procedure, they have to publish it, both in Hebrew and in Arabic. But they do only what they have to, only what the court makes them do — otherwise they would have done nothing,” Heger added.

Despite multiple attempts, COGAT did not respond to +972’s request for comment. Should one be received, it will be added here.

If a tree falls in the woods…

And what of the website where all these policies and procedures are supposed to be published? COGAT’s official page has been out of action since June 2015, an issue which has become part of Gisha’s ongoing petition to compel COGAT to meet its obligations under the FOIA. While COGAT has been more responsive than the Civil Administration in publishing its policies and procedures, it has done so on a temporary website that until recently was not indexed in Google and not linked to from COGAT’s inactive, official website.

An Israeli soldier checks a Palestinian motorist’s identity documents at a checkpoint outside the West Bank city of Hebron on June 17, 2014. (Photo: Tess Scheflan/Activestills.org)

Although the official website does now link to the temporary site, it does so only from the Hebrew page — the Arabic page, which is the far more relevant one given the population under COGAT’s control, does not mention the replacement site anywhere. Since March 24, 2016, COGAT has had an active Facebook page in Arabic — launched about nine months after its English page, which sprang into life at almost exactly the same time that their website stopped being updated — but this is in no way a substitute for a fully-functioning, active internet site.

COGAT’s latest commitment is to have its new website up and running by August 2016. If this timeline is kept, it will have been without a proper webpage for over a year. In a previous conversation with +972 Magazine, COGAT’s spokesperson attributed the delay in building a new site to a lack of funds and an absence of Arabic speakers who could carry out the necessary translations. But Heger called this claim “embarrassing,” pointing out that the Defense Ministry has an annual budget of NIS 56 billion and plenty of Arabic speakers on its staff.

But this kind of disregard has characterized the long, painstaking process to have COGAT and the Civil Administration meet the bare minimum of their legal obligations in the name of transparency. Of all the daily injustices wrought by military occupation, restricting access to information is one of the most overlooked and yet most insidious examples. Tuesday’s court victory is a remarkable achievement in light of the culture of impunity that reigns in the West Bank, above all in the constant breaching of Palestinians’ human rights — not least the right to life. But as with any victory against an apparatus that is grounded in injustice, it also serves to highlight just how urgent is the need to bring half a century of grinding oppression to an end.

Update: On May 14th, COGAT sent the following response:

“In a proceeding of freedom of information, the Civil Administration has been asked to publish its policies and procedures in its website. Those procedures required preparations prior the publishing, including ensuring the relevancy of the information.

“The Civil Administration has obligated to publish the rest of the procedures within 45 days as the Court has ruled.”