A new law compels African asylum seekers to deposit a fifth of their wages into a fund they can only access if they leave the country. It’s just the latest in a long line of methods the Israeli government is using to push black asylum seekers out. 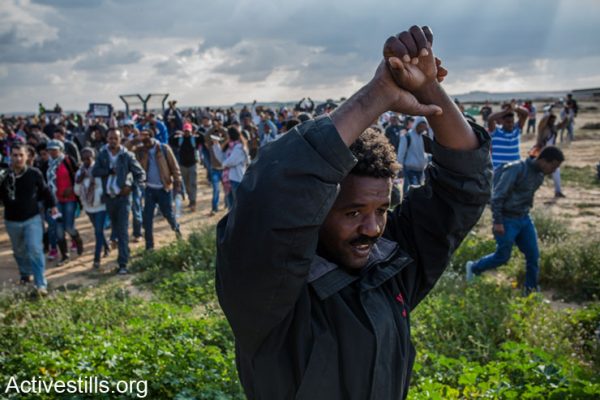 Asylum seekers protest outside Holot detention center, calling to close the prison and to recognize the refugee rights of the African asylum seekers living in Israel. (Activestills.org)

African asylum seekers in Israel will now have to deposit 20 percent of their salaries into a fund they will only be able to access if they leave the country, after an 2014 amendment to the Prevention of Infiltration law took effect on May 1. Their employers will also have to deposit 16 percent of the pension and compensation allowances asylum seekers are entitled to into the same fund.

As if this weren’t punishment enough, the so-called “Deposit Law” also stipulates that asylum seekers can be fined, via deduction from the fund, if they are ordered to leave the country and do not do so within the timeframe specified.

It bears mentioning that asylum seekers already pay the highest taxes in the employment market, and will now take home a monthly paycheck that is only 65-70 percent of what they earned.

The amendment will not only further impoverish an already weak community and severely damage people’s ability to survive. Organizations working with asylum seekers also expect to it impact communities living around them, who for years have been struggling with limited resources in areas consistently neglected by the government. It should also be emphasized that the legislation will also negatively affect the labor market — many employers and workers trying to dodge the fund payments will resort to illegal labor, dragging the entire market down with them.

A closer look at the situation of immigrants in Israel shows a clear divide between those who are the targets of these cruel new laws, and those who fly under the radar of the government, the media and the public. There is no denying that recent laws, in a mostly sweeping manner, target black people — immigrants from Africa.

The non-Israeli population of Israel currently stands at around 218,000 people — both those with temporary permits or visas, and those who are undocumented. Out of this number, around 84,000 are termed “labor migrants” or “foreign workers,” and are formally recognized as such by the Israeli government. Another 94,000 are in Israel with no documentation, and are classified as “illegals” by the authorities.

The Population and Immigration Authority (PIA) categorizes this group by country of origin; in descending numerical order, they hail from the former Soviet Union, Romania, Mexico, the Philippines, India, Turkey, Egypt, Columbia, Venezuela, Hungary, the Czech Republic and Slovakia, Peru, and other countries. 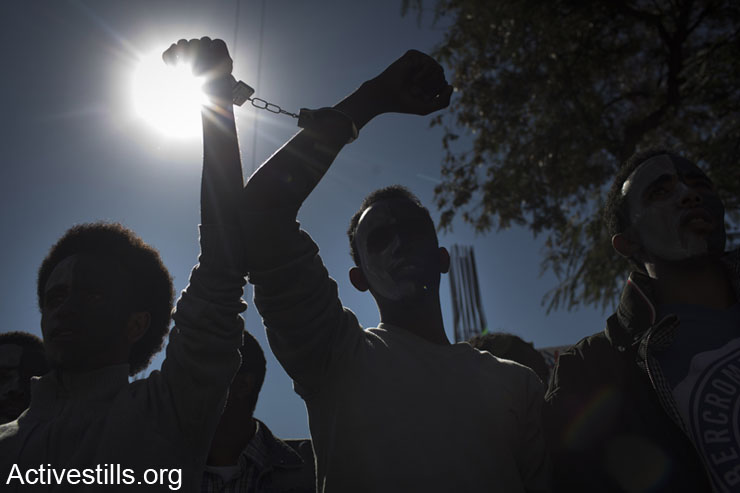 African asylum seekers shout slogans during a protest in front of the UN refugee agency (UNHCR), Tel Aviv, February 13, 2014. The demonstrators protested against the Holot detention center for African immigrants, and called on the Israeli government to recognize their refugee rights. (photo: Oren Ziv/Activestills.org)

Since last year, a further 14,000 asylum seekers from Ukraine and Georgia have joined the immigrant population in Israel; following the cancelation of the requirement for them to seek advance approval to visit the country, they have been arriving as tourists and requested asylum once in Israel. The government is currently assessing who among them is entitled to protection, and none of them are defined as “infiltrators.”

The Israeli government is therefore waging is biggest and most public battle against a relatively small part of the foreign population here, those who in fact have remained in Israel legally, on permits they have to renew every two or three months (depending on the mood of the PIA employee who is renewing it). Their only crime is the manner in which they entered Israel — much like the overwhelming majority of asylum seekers around the world, who cross borders on foot until they reach somewhere they can receive protection.

Forcing out those who can’t be deported

According to PIA statistics, an average of 8.8 people are deported from Israel daily. In 2016, for example, around a third of undocumented immigrants in Israel were removed from the country.

Eritrean and Sudanese asylum seekers, however, cannot legally be deported: they are defined under international law as protected populations, whose expulsion could put their liberty and lives in grave danger. (Asylum seekers previously deported from Israel have died in South Sudan and executed by the Islamic State group.) Israel doesn’t want to be branded as forcing out this population, so it prefers to make their lives so miserable that risking danger and leaving the country becomes a more favorable option.

The Israeli government has a range of methods to this end. It neglects almost entirely to individually review asylum requests from Eritreans and Sudanese and certainly doesn’t approve them. At the same time, it arbitrarily sends these asylum seekers to the Holot detention center for up to a year, keeping them in administrative detention. And now, a fifth of their paycheck is being deducted each month — indeed, those who advanced the “Deposit Law” claim, proudly and in unison, that the aim of the legislation is to pressure asylum seekers into “voluntary deportation.”

And it’s working — 3,246 Eritrean and Sudanese asylum seekers left Israel in 2016, almost the same number as other migrants who were expelled, but around double the percentage relative to the size of the community.

Israel invests a fortune in maintaining a prison and passing laws aimed at pushing out precisely those whom the UN Refugee Convention protects, and in fact works tirelessly in order to render meaningless its own signature on that very agreement. And it does so while working calmly and at a leisurely pace vis-à-vis white immigrants.

If Israel had invested even a fraction of the resources and energy it does into abusing African asylum seekers into, instead, reviewing their asylum requests, integrating them into Israeli society and making sure they are evenly distributed across the country, the benefits would have been manifold: to asylum seekers, to Israeli society, and to the lost honor of the UN Refugee Convention, which seems to have been forgotten by those in power.

Noa Kaufman is the Coordinator for Refugee and Asylum Seeker Workers at the Worker’s Hotline. This post was originally published in Hebrew on Local Call.