In the wake of an Israeli government vote to decriminalize the recreational use of marijuana, an enterprising legalization activist has created a virtual marketplace for buyers and sellers of cannabis. 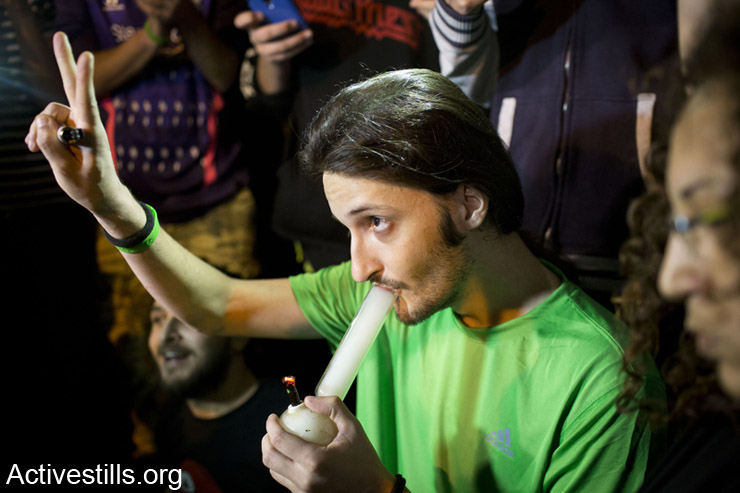 An Israeli man smokes a bong as over 1500 protesters blocked a road leading to the Israeli parliament, during a demo calling to the Israeli government to legalize the use of cannabis, West Jerusalem, April 20, 2014 (Activestills.org)

Whether they’re after skunk, White Widow or Lemon Haze, Israelis can now purchase the cannabis of their choice with about as much ease as any other kind of plant. In the days following the Israeli government’s vote to move to decriminalize recreational marijuana use, thousands of Israelis joined so-called “Telegrass” groups on the Telegram messaging app, initiated by activists who been campaigning for legalization. Cannabis merchants can, through these groups, openly sell their wares to the Israeli public for the first time.

There are still some technical issues, some lingering fears, and a lot of sensitivity among users of the service, but that hasn’t stopped increasing numbers of people from joining “Telegrass,” which runs 24 hours a day.

About a year ago, Amos Dov Silver — who launched “Telegrass” — decided to use his Facebook page to connect buyers and sellers of marijuana. Silver, whose years-long battle for legalization saw him playing cat-and-mouse with the authorities and going through arrests and release, now lives in California. When the number of responses on his Facebook page started to grow, Silver came up with a new method, suggesting to sellers that they open fictional Facebook accounts and offer their goods from there, while tagging him in their posts.

Buyers were now able to find sellers, and sellers could verify their customers’ identities through their own Facebook profiles. Silver makes no profit from these sales, but he still makes sure to check the identity of the sellers who tag him, in an effort to confirm — as far as possible — that they’re not scamming their buyers, whether through theft or the quantity or quality of their goods. 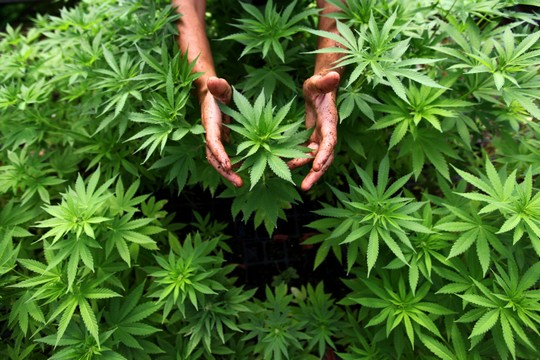 A worker tends to cannabis plants at a growing facility for the Tikun Olam company near the northern city of Safed, August 31, 2010. (Abir Sultan/Flash 90)

This small venture quickly grew. “After the first seller came the second, then the third and fourth,” Silver says. “Today there are around 20 sellers active on a daily basis, and a similar number who are slightly less active.” But each seller who tagged him had their own questions and issues, and Silver recently decided to try and professionalize, developing another business model in which the sellers would manage themselves.

So at the end of March he published a Facebook post announcing that buyers and sellers could now connect directly via Telegram, a messaging app that allows users to converse anonymously via “secret chats.” “Telegrass” was born, and the floodgates opened.

Different “channels” on Telegram serve different areas of the country, and as of the beginning of April, each channel has between 500 and 1,500 users. However, due to ongoing technical issues, many buyers and sellers are still trading via Silver’s Facebook page. He claims that the best minds in the business are trying to fix these problems.

As for the police, Silver says that “merchants have been selling publicly for a year, and remain free as a bird.” To the best of his knowledge, no one has been arrested as a result of his Facebook operation; furthermore, he adds, his trading platform exposes sellers to less risk than that faced by “street dealers.”

At the end of March, Silver was blocked by the Israel Police’s Facebook page, meaning he can no longer tag them in his many posts about the upcoming “Big Bong Night” in Jerusalem on April 20, organized by pro-legalization activists. They hope that this year, the thousands of people in attendance will decide to stop obeying the law and literally smoke pot in cops’ faces. If a few thousand demonstrators do that together, the organizers hope, the police will find it difficult to enforce the law.

“We’re coming to smoke — not to fight, beg, sermonize or get angry, just smoke. And we’ll take them on, at the center of the state’s institutions, from the legislature to the courts,” Silver promises.

Yael Marom is Just Vision’s public engagement manager in Israel and a co-editor of Local Call, where a longer version of this article was originally published in Hebrew. Translated by Natasha Roth.

Correction: The title of this article has been changed to reflect that decriminalization of marijuana has not yet occurred, despite a government vote to implement it in the near future.