Out of over 180 complaints filed over taser use by police between 2014-2016, only 12 cases were actually investigated. Not a single officer was indicted. 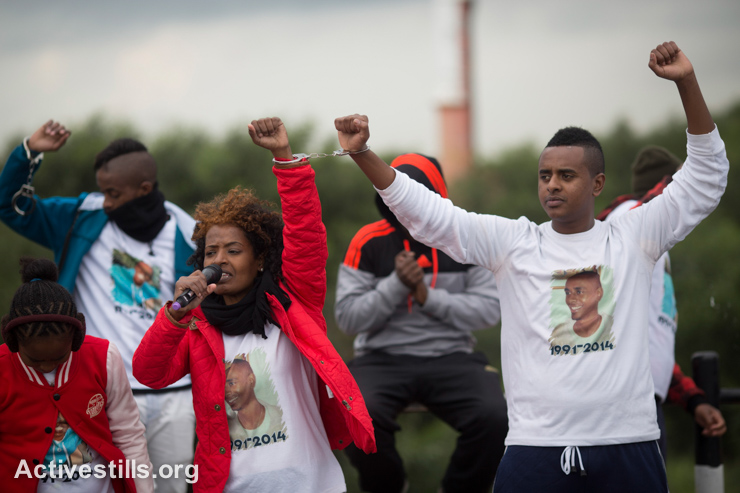 Relatives and members of the Jewish Ethiopian community protest during a march held in memory of Yosef Salamsa, January 4, 2015. Salamsa was found dead weeks after facing police brutality. This was the first day of a two-day march from Binyamina in northern Israel to Jerusalem. (Activestills.org)

Yosef Salamsa was supposed to celebrate his 25th birthday last month. His tragic death, which took place several months after Israeli police tasseled him without any justification, did not lead to justice. The complaint filed with the Israel Police Investigation Unit was closed, as were dozens of other complaints over taser use, according to statistics [Hebrew] handed over by the Justice Ministry to the Association for Civil Rights in Israel (ACRI).

In fact, these statistics raise suspicions of severe deficiencies in the Police Investigation Unit, as well as helplessness when it comes to taking the use of tasers seriously. Out of 186 complaints filed over taser use between 2014-2016, only 12 cases were investigated. Not a single indictment was filed. In the majority of cases — nearly 90 percent — the cases were closed without investigation.

Yosef Salamsa, a young Ethiopian-Israeli, was cruelly electrocuted by the police in 2014. According to reports, Salamsa can be heard telling police “have mercy on me, my heart cannot take it,” after he was tasered a number of times, without warning or justification. Testimonies show that Salamsa was bruised, cuffed, and vomiting when he arrived at the police station. This is how his family found him outside the Binyamina police station, before he was given medical treatment. According to the police, Salamsa was given a warning before being based, and was kept outside the police station according to procedures.

Following the violent arrest, Salamsa filed a complain with the Police Investigation Unit. His family claims that police officers retaliated by coming to their home and threatening to make their life hell. After a number of months, Salamsa’s body was found at a quarry adjacent to Binyamina. The Police Investigation Unit decided to close the case against the officers without any disciplinary action. This despite the testimonies that cast a dark shadow on the police’s conduct, and the suspicion that the police reports that were filed in the wake of the tasing “do not reflect the truth.” 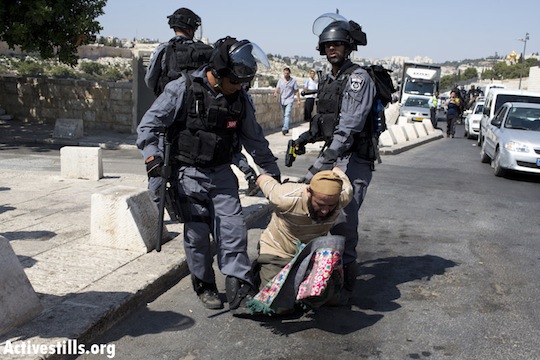 Israeli policemen arrest a Palestinian man after shooting him with a taser in the East Jerusalem neighborhood of Ras al-Amud, September 27, 2013. (photo: Activestills)

Back in 2014 the state comptroller report pointed out the severe shortcomings in using tasers. Among other things, the comptroller recommended that the police take steps to ensure safe, supervised usage of tasers. Two years later, it seems that not a thing has changed and the recommendations were never implemented. Meanwhile, the Justice Ministry’s anti-racist initiative established in a number of its own recommendations that there need to be “additional oversight mechanisms, that will ensure tighter supervision and oversight on taser usage, which will decrease its use to the necessary minimum.”

Despite the warning signs, Israeli police have lately decided to arm themselves with another thousand tasers (at the cost of NIS 13 million). In doing so, it has increased the concern that there will be hundreds more cases of unnecessary force, without any authority or oversight, and without the proper supervision.

Today, police procedures allow using tasers not only for self defense or in cases in which lethal force may be used, but also as “part of the authority to carry out an arrest” and as a “means to restrain detainees.” Whether or not the suspect constitutes a threat is irrelevant. The significance is that police have the authority to use tasers even in cases in which an unruly person may cause harm to property but not to others. That is, there is no restriction on using tasers in extreme cases of potential harm to others.

A gun that appears in the first act will likely be fired in the third. This rule of thumb, which is true for theaters, is also relevant to for our reality today. When the system isn’t prepared to oversee and supervise the use of tasers, they will inevitably be used.

Sapir Sluzker-Amran is a blogger for Local Call, where this article was first published in Hebrew. Read it here. This article was written with the help of Oded Ron, an intern with the Association for Civil Rights in Israel.