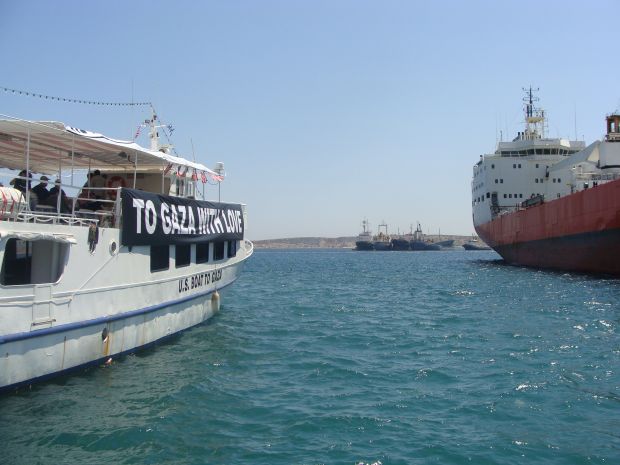 According to the “IDFSpokesperson” account on Twitter, “Gaza is under a maritime security blockade according to international law.” The two-boat flotilla known as “Freedom Waves to Gaza,” which the army stopped yesterday from reaching the coastal territory, is, according to the same Twitter feed a “provocatilla.”

Setting aside the issue of whether or not the blockade is legal–and I don’t believe that is–here’s what the IDF fails to mention when it starts issuing statements about the blockade:

1) In August of 2008 and October of the same year, boats manned by activists reached Gaza, breaking the blockade that Israel is now so intent on enforcing.

2) Israel itself selectively breaks the blockade when it needs or wants to. Take, for example, the recent decision to import palm fronds from Gaza for Sukkot.

3) Even though both the Israeli government and the mainstream media claims that the blockade began in 2007, the closure of Gaza was a gradual process that started in 1991. While what we see today is, thus far, the most severe manifestation of this process, Palestinian residents of the Gaza Strip have been subject to collective punishment for two decades.

Hamas taxes goods coming in through the tunnels from Egypt. While those products aren’t enough and the tunnel economy does not sustain Gaza, what is entering is enough for Hamas to maintain the image of resistance in the face of the Israeli blockade. For example: according to a recent article from the Alternative Information Center, Hamas is using building materials smuggled into Gaza for a new housing project. This won’t be enough and Gaza will remain in a housing crisis. However, such symbolic initiatives can boost the popularity of Hamas.

4) And as for that boogeyman, Hamas? Israel helped create it, encouraging the growth of Islamist groups to counter Fatah. While the Wall Street Journal refers to Israel’s relationships with Islamists as “a catalog of unintended…consequences” in the linked article, I suspect Israel had a divide and conquer strategy. What can’t be argued is that the chilly relations between Hamas and Fatah–and that competing parties rule the Occupied Palestinian Territories–serve Israeli interests.