Israel says allowing organizations to visit Gaza inherently ‘strengthens Hamas,’ even when no visits with Hamas officials are planned. Couldn’t the same logic be used to argue for a boycott of Israel, considering Israel’s occupation regime? 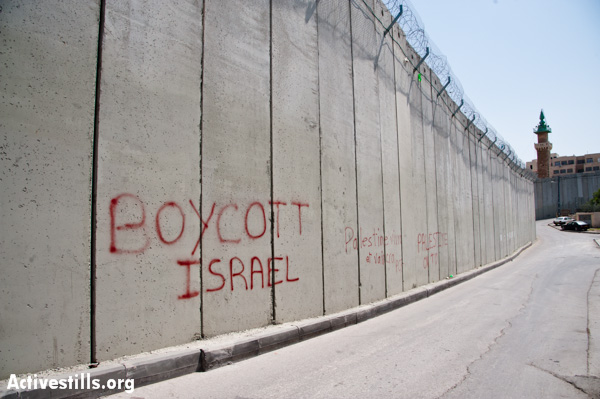 Israel blocked a European Parliament humanitarian delegation from entering the Gaza Strip through Israel last week, claiming that the visit would “strengthen Hamas.”

The draft program of the trip, seen by +972, was scheduled to take place this week, October 27-30. The delegation was expected to enter Gaza through Israel’s Erez Crossing on Monday morning after spending the night in East Jerusalem and leaving through Erez and and driving straight to Ben-Gurion Airport Wednesday. The program does not appear to include any meetings with Hamas officials; rather, the two-and-a-half-day trip was to focus on civil society and the work of UNRWA, the UN organization supporting Palestinian refugees.

In an email to the delegation, the Israel mission to the European Union denied that “Israel refused an official visit of the delegation to Gaza… but rather refused the use of its territory to enter the Gaza Strip.” The email went on to explain, “this is in line with the policy according to which Israel does not facilitate visits to the Gaza Strip which will strengthen Hamas, a terror organization designated as such also by the European Union.”

The EU delegation was to have included MEPs Emer Costello (Ireland), Margarete Auken (Denmark), Sir Robert Atkins (UK) as well as MEPs from Germany and France. The delegation was organized with the knowledge and support of European Parliament President Martin Shultz.

Costello condemned the Israeli decision, saying members were “shocked and dismayed,” since the visit was “due to take place under the auspices of UNRWA, and clearly focused on vital public services such as schools, health centers and food distribution centers.” Costello requested that President Schulz and High Representative Catherine Ashton take up the issue with the Israeli authorities, but thus far nothing has changed. Costello told +972 Monday that the delegation was now in Ramallah and had decided on an alternative program in the West Bank and East Jerusalem instead, as well as “monitoring political developments in the region including that of the Palestinian prisoners being held in Israeli prisons.”

Since July when the EU announced that as of 2014 it would enforce settlement guidelines that limit many joint projects with Israel beyond the pre-1967 borders (although it has since become clear how insubstantial the guidelines are designated to be), Israel has been scrambling to deter and reject the move. Since July, European Union aid staff have been barred entry permits to Gaza and the Defense Ministry has made life difficult for EU humanitarian projects in the West Bank and Gaza.

The latest decision by Israel not only demonstrates that it continues to control access to Gaza and uses its sovereign powers to interfere with EU and UN work in order to flex political muscle (much in the same way it does in the West Bank), but it also ironically gives credence to the argument for boycotting Israel.

According to Israel’s logic, any delegation coming here, regardless of the reason for the trip, could be seen as bolstering Israel’s military occupation and colonization-style regime just by stepping foot in the country — the same way allowing an EU delegation to enter Gaza would have bolstered Hamas.

It doesn’t matter to Israel that there are real people living in Gaza – 43% who are under 15 years of age  -or that over 70% of the population requires humanitarian aid, living in a veritable prison that is subject to the whims of the Egyptian and Israeli governments. For Israel, Gaza is just the terrorism of Hamas.

But for many people around the world, Israel is identified with the terror inflicted by the Israel Defense Forces and the government, bodies responsible for myriad human rights violations – whether through its control and deprivation of natural resources; restrictions on freedom of movement and protest; terrorizing villages with night raids and children arrests; jailing people without charge; letting violent citizens (or inciting politicians for that matter) continue to act with impunity; depriving people of water, land, etc. The list, unfortunately, goes on and on.

So according to this logic, anyone in the world who opposes Israeli government policies should not enter Israel, because doing so clearly “strengthens Israel’s occupation regime.”