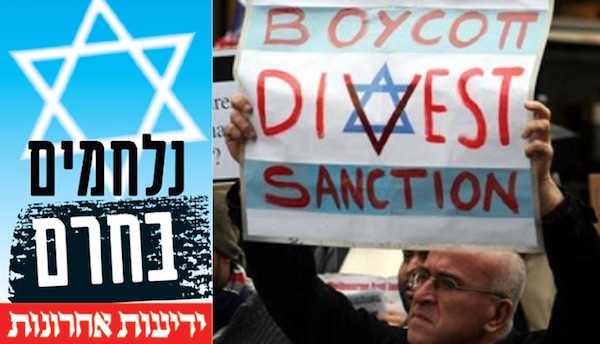 A special graphic, reading ‘fighting the boycott,’ published by ‘Yedioth Ahronoth’ on its Facebook page to accompany its new public campaign against BDS, June 1, 2015.

Israel’s best-selling daily newspaper Yedioth Ahronoth and its website, Ynet, launched a special project on Monday. Under the banner, “Fighting the Boycott,” the newspaper entered “trench warfare” against the boycott Israel movement. Star right-wing columnist Ben-Dror Yemini wrote a long article claiming that the boycott movement is borne of a desire to de-legitimize the entire State of Israel, and not just the settlements and the occupation.

There are some serious problems with that line of argument, and not just the fact that it is a gross generalization. True, significant parts of the BDS movement challenge the State of Israel’s right to exist as a nation state for the Jewish people. True, there are some in the radical Israeli left who see the 1948 war as Zionism’s original sin, the source of its unraveling. But the entire movement is certainly not convinced that the Israel has no right to exist. BDS is a coalition of organizations, intellectuals and activists that represent a wide range of positions.

And the BDS movement is not the premier international threat facing Israel. It is secondary to steps and processes being undertaken by the European Union, individual European states, and in various UN bodies. None of those threats challenge Israel’s right to exist. We need only to think back to the FIFA crisis this past week, where the attempt to boycott Israel pivoted on the occupation and not Israel’s very existence; if Israel was the problem it wouldn’t have been accepted into FIFA in the first place. Indeed, the international community is not in the habit of challenging the existence of states that have been recognized by the UN, and whose right to exist the UN has reaffirmed time and again.

What is taking place in Israel these days is reminiscent of what took place in South Africa in the 1980s and in Yugoslavia in the 1990s: international pressure that is focused on a specific problem is understood by those states’ citizens as an assault against the entire country, evidenced by the world’s irrational loathing and hatred of it. As a result, nationalism grows, internal dissent is silenced, and various democratic characteristics become weaker, or are weakened.

Take for example, in South Africa, the activist movement Black Sash, a group of white women who opposed apartheid. The activists organized protests and published reports that highlighted the injustices of apartheid. For that work they were ostracized, labeled as traitors, and even suffered physical violence. As apartheid became more repressive and international pressure increased, opposition to Black Sash intensified: its members were repeatedly arrested, their protests were banned, and the violence directed toward them got worse. 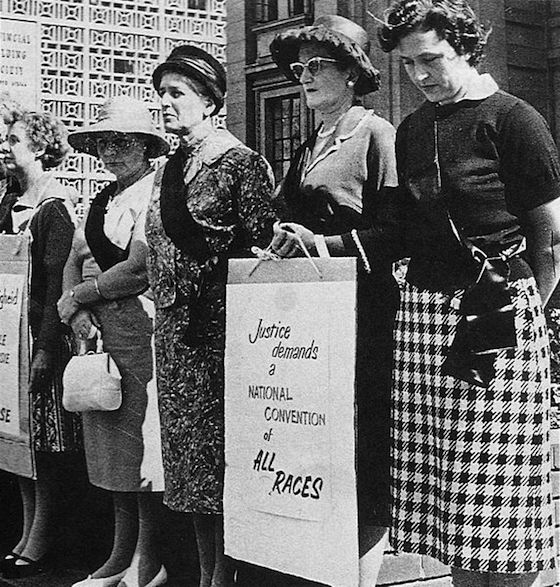 In Serbia it was a similar story. The Serbs saw themselves as the victims of the international media, which, they alleged, did not fairly portray their positions. In the period when Serbia was subjected to international criticism, support for Slobodan Milosevic only increased; hatred toward Albanians became stronger, democracy was weakened, and opposition activists were seen as traitors.

It is a dynamic that is as predictable as it is depressing: a country suffering from negative international treatment entrenches itself in self-righteousness and sees any criticism as illegitimate. National unity coalesces against external threats, but because there is no desire to resolve the problem causing the external pressure, anger and frustration are eventually directed toward the internal opposition, toward the media, or toward problematic but marginal actors — like Yedioth’s special project against BDS. This process is not a Jewish invention, as we can learn form what happened in South Africa and Yugoslavia.

Of course we are still far from the type of sanctions that were imposed on South Africa, and certainly from the military intervention that took place in Serbia — and I hope – and believe – we will never get there. But we can learn from those examples that the international community’s harsh, negative treatment suffered by those two countries was not meant to destroy or wipe them off the map. Nobody today questions the existence of South Africa or the countries that emerged from Yugoslavia, which were recognized by the UN. That is because the moment the central problem was resolved, the entire affair was over as far as the international community was concerned. And the central problem facing Israel is the occupation.

Dr. Tomer Persico is a Post-Doctoral Fellow at the Elyachar Center in Ben Gurion University. He also teaches at the department for Comparative Religion in Tel-Aviv University and at the Schechter Institute in Jerusalem. This article was first published in Hebrew on Local Call. Read it here.