Fifty years on, Martin Luther King Jr.’s words resonate more than ever: those who are silent are all part of the problem. It is they who have allowed Israel to neglect south Tel Aviv and to condemn asylum seekers to torture and death. 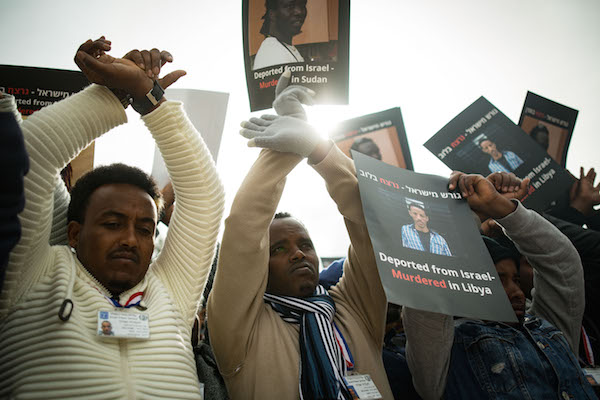 African migrants gather during a protest outside the Supreme Court in Jerusalem on January 26, 2017. African asylum seekers protest on Thursday near the Kneeset and the Supreme Court against the new “Rwanda or Saharonim” policy of the Israeli government. (Sebi Berens/Flash90)

On January 15, Americans observed Martin Luther King Day, marking 50 years since the civil rights leader was shot and killed in Memphis, Tennessee. The struggle for equal rights in the United States was not won in court but in the streets — by people who had had enough of the status quo and organized to effect change.

In 1965, the city of Selma was at the center of the struggle for civil rights and against segregation. Martin Luther King Jr. gave a speech there, amid the chaos and the real fear of violence and death. One specific sentence still stands out to me:

Those brave people who took the streets knew that they would face severe, even deadly, police violence. They protested knowing they would likely face time in prison. They did not stand idly by. And they were not at risk of facing merely an argument with a police officer, a few hours or even a night in jail, or a nasty post on Facebook from Yoav Eliassi — a right-wing rapper know as “The Shadow” with a violent following — and his friends. It’s true that those are all unpleasant. But that is what struggle and resistance looks like when there is no choice.

The Israeli government will soon deport tens of thousands of people to their deaths and we will stand idly by. We won’t share a post on Facebook because we fear a family member or friend will respond with “What about south Tel Aviv?” or “It’s our country.” So we choose to avoid confrontation. We won’t go to a demonstration because we had a long day at work and, besides, it won’t make a difference.  We won’t read the testimonies of asylum seekers or look at the pictures of the bodies of people who experienced torture — people with whom we have brushed shoulders — because it is too hard for us. We would rather watch cute cat videos.

There is nothing underlying the slogans “Not in My Name.” I suggest we take get rid of it entirely. The deportations will be carried out in the name of all those who sit quietly, too afraid to say anything.

This is not a matter of sides. The same people opposing the deportation of the asylum seekers are also active in south Tel Aviv, working with people living in poverty and part of the struggle to stop the evictions in working class Mizrahi neighborhoods, such as Givat Amal. That is how I know I’m on the right side. 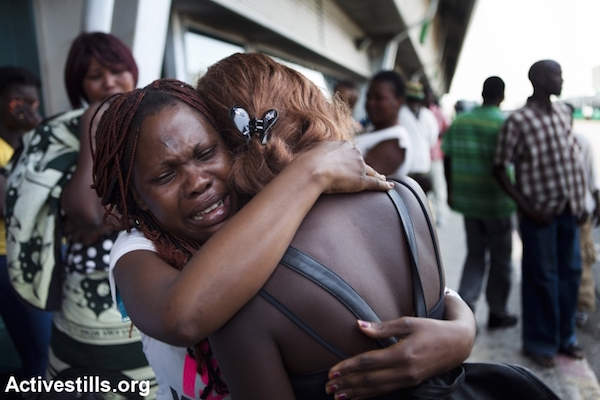 Asylum seekers before the deportation of South Sudanese refugees in 2012. (Oren Ziv/Activestills.org)

When I give interviews and explain my position on the asylum seekers, I face cursing and threats, in addition to praise. Does this make me happy? Does it make me feel good that people tell me I should be raped or beaten? No, but that is life. We cannot only listen to popular views. It doesn’t work that way. More than that: those words are insignificant when compared to the bigger picture. In the end, our struggle means nothing if we’re silent about the suffering of others.

More than the racist calls to deport the asylum seekers, there is a silence of those who sit on the sidelines, too afraid to speak out. This silence is dangerous, but it is also painful — because support and solidarity are so important for the struggles to come, so integral to the faith that things here can be different. In the spirit of Martin Luther King’s words, those who are silent are all part of the problem; it is they who have allowed the government to continue to neglect south Tel Aviv and to condemn people to torture and death.

We need to publicly and unapologetically resist the deportation. Without any “ifs,” “ands” or “buts,” we can articulate a nuanced position on Israeli migration policy, south Tel Aviv, and other topics without supporting the deportations, which will do nothing to help the homeless people sleeping near the train station or my neighbors who collect bottles to survive.

Since we’re already dealing in quotations, here is a quote from Sophie Scholl, a member of the White Rose, a nonviolent, underground group of German citizens that resisted the Nazis. She was executed by guillotine. Anyone who needs to find courage within themselves should read it, and then join us:

The real damage is done by those millions who want to ‘survive.’ The honest men who just want to be left in peace. Those who don’t want their little lives disturbed by anything bigger than themselves. Those with no sides and no causes. Those who won’t take measure of their own strength, for fear of antagonizing their own weakness. Those who don’t like to make waves—or enemies. Those for whom freedom, honor, truth, and principles are only literature. Those who live small, mate small, die small. It’s the reductionist approach to life: if you keep it small, you’ll keep it under control. If you don’t make any noise, the bogeyman won’t find you. But it’s all an illusion, because they die too, those people who roll up their spirits into tiny little balls so as to be safe.

Safe?! From what? Life is always on the edge of death; narrow streets lead to the same place as wide avenues, and a little candle burns itself out just like a flaming torch does.

I choose my own way to burn.

Sapir Sluzker-Amran is a blogger for Local Call, where this article was first published in Hebrew.