Since the IDF cannot and will not protect Palestinians from settlers, it’s time to turn over the West Bank to an international force.

An incident in the village of Asira Al-Qibiliya drew media attention on Saturday, since it was captured on B’Tselem’s cameras. A group of Yitzhar settlers tried to raid the village, set its fields on fire, and two of its people opened live fire against the villagers who gathered to defend themselves, severely wounding one of them. IDF gunmen present at the scene did nothing. The IDF Spokesman sputtered something (Hebrew) about “on the face of it, the video does not represent the entire incident.” Absent from the IDF Spokesman was any reference to the arrest of settlers trying to invade a Palestinian village and opening live fire.

The settlers, blindsided by the fact the incident was actually covered, came up with several arguments. They claimed (a) that the fire was started by the Palestinians; that (b) observant Jews won’t light fires on Saturday, and that (c) the raiders were in fact the settlement’s squad of guardsmen.

Dismantling these lies is important in order to expose the settlers’ culture of deceit. As Haggai wrote, an earlier video shows the settlers coming down the hill, and at the time there is no sign of fire. The main video shows the fire very near to the village, and a Palestinian fire-fighting truck. We are, then, asked to believe that as the settlers were coming down, some Palestinians crossed their way and lit a fire behind them. A likely story. If you buy it, I have a seaside house in Jerusalem going for very reasonable rates.

The second lie is easily disproved. Raids by Yitzhar settlers are rather common, particularly on Saturday, as the holy flock is infused with the “extra soul” of the holy day and dies of boredom. Just a year ago, the settlers of Yitzhar were documented (Hebrew) raiding Asira Al-Qibiliya, stoning the residents, and setting a vehicle on fire. Among the pogromchiks was also Yitzhak Shapira, the head of the Yitzhar yeshiva, who is a co-author of the infamous “Torat Ha’Melekh” tract, the manual on gentile-slaying. The settlers said at the time that you can break the sanctity of the Sabbath if you are in conflict with non-Jews. How… convenient. They probably did not think that someone will remember this excuse a year later, and that it’ll come back to bite their latest lie.

As for the third lie: I served in the territories, and I’ve never seen a rapid deployment squad with only three armed men, one of them brandishing a pistol. And just what is the squad doing outside the settlement? Going AWOL?

The settlers, however, are not the issue. The settlers of Yitzhar are a well-known raging bull. The issue is the IDF. Its presence in the West Bank is allowed only because it is an occupying power. As such it is obligated to defend the occupied population. It never managed that, and never tried too hard. Not only does it support the transferring of Jewish population to occupied territories, which is a war crime, and not only does it protect this population (yet another war crime), it consistently allows the settlers to harm persons which according to the laws of war are under its protection. And the laws of war, again, are the only pretext for the IDF’s presence in the West Bank. 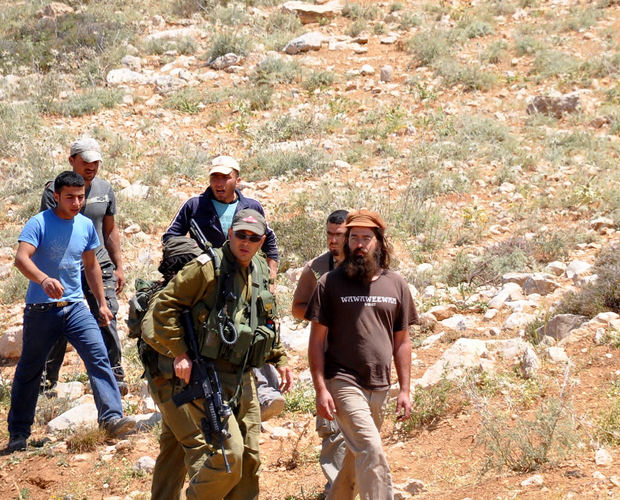 And it’s not just Yitzhar: settlers attacked Palestinians yesterday near the outpost Mitzpeh Yair, and one of them stole and smashed a video camera held by a B’Tselem investigator and threatened him (Hebrew). IDF gunmen present, again, did not intervene. This has been going on for many years now. In late 2011, after settlers attacked an IDF base, IDF Spokesman Brig. Gen. Yoav Mordechai told military reporter Carmela Menashe – who asked him how would an IDF colonel respond to a stone attack coming not from a member of the Chosen People but from a Palestinian – thus: ” I assume, Carmela, that you wouldn’t expect the brigade commander to open fire on a Jew standing in front of him, I am certain you didn’t mean that.”

Which says all there is to say. The IDF can’t, by which I mean won’t, do its duty and protect the Palestinians from the invaders it brought into their midst. Its generals don’t even understand it’s their duty, their first duty, and that protecting the settlements comes last if at all. Given that, and given that the peace process is an unfunny joke, we should campaign for the replacement of the IDF in the West Bank by an international peace keeping force. The IDF has had 45 years to prove it is capable of doing its duty as an occupying force; it failed. It’s time to bring forward a new military force, which can defend the indigenous population from the predatory one.