In the run-up to every general election since 2003, Arab parties and candidates have been forced to appear in front of this committee to prove that they deserve to participate in Knesset elections. The only thing worse than the process itself is the racist atmosphere in the meetings.

The Central Elections Committee (CEC), which votes on disqualification motions submitted against political parties and candidates, and has the power to ban them from running in the Knesset elections, has in recent years become a farcical and undignified charade. In the run-up to every general election since 2003, Arab parties and candidates have been forced to appear in front of this committee, composed primarily of marginal political players from parties that represent the Jewish majority, in order to prove that they deserve to participate in the Knesset elections.

What is worse than the process itself – which amounts to the repeated trial of the political representatives of the Palestinian minority in Israel – is the hate-filled and racist atmosphere that saturates these sessions. From the moment they enter the chamber, the representatives of Arab political parties face a barrage of racist remarks and slurs that ends only when they leave the room. In a true democratic state, the mere utterance of such racist statements would be sufficient grounds to bar a member from the committee, and the offender may even find him or herself facing criminal prosecution.

As someone who has attended all the CEC’s disqualification sessions since 2003, I can attest that in its recent review of the disqualification motions against Arab MK Haneen Zoabi, the committee slumped to a new low. As soon as MK Zoabi stepped up to the podium to deliver her response to the disqualification motions, the CEC members turned into a baying mob that interrupted her speech countless times. They repeatedly subjected MK Zoabi to racist and chauvinistic insults, and slandered her as a terrorist and a subversive character.

The peak of their impudence came when MK Zoabi read aloud a sentence in Arabic, after which one of the committee members shouted out: “I’m scared that you are going to say ‘Allahu Akbar’ and blow yourself up!” The chair of the CEC, Supreme Court Justice Salim Joubran, did not fulfil his duty to defend MK Zoabi’s right to voice her response to the disqualification motions, which were filled with slanderous and racist claims against her. Instead, he urged her to wrap up her speech while repeatedly asking the committee members to keep calm, and to “show me some respect and let me run the session.” 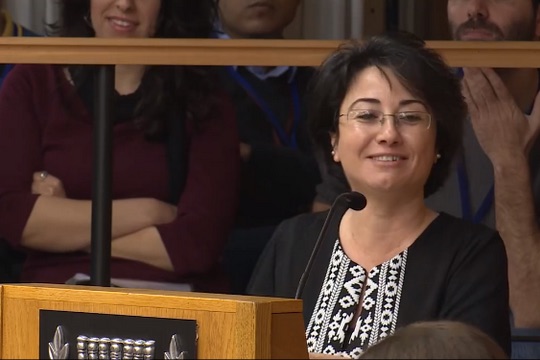 A closer look at these CEC sessions indicates that the kinds of cases that come before it over and over again center on the following questions: is the political vision of the Arab parties in the Knesset legitimate? Are Arabs citizens permitted to demand full equality? Are they allowed to express their solidarity with their people living under Israeli occupation and military suppression? These and other questions that are political in nature should not be subject to interrogation, at least not before the CEC and not in the context of motions to disqualify political party slates or candidates.

The coverage by the Israeli media of the disqualification process – which is given far more attention than the regular political activities of Arab MKs – represents the continued negotiation of the limits created by the Israeli establishment to confine the political activities of the Palestinian minority, and has lacked any genuinely critical analysis. Arab citizens and their concerns are excluded from the agendas of the Zionist political parties, and rarely if ever appear in the discussions surrounding the Israeli elections. Instead, the main context in which Arab citizens are mentioned during the elections is in relation to the question of their solidarity with the Palestinian people in the OPT, asking whether this solidarity constitutes support for terrorist organizations, and whether Arabs should even have the right to participate in the elections.

The only consolation is that the Arab MKs are far more capable, on a personal and professional level, than the MKs on the CEC. They have successfully managed to turn this hostile forum into a platform on which to rearticulate their political positions and vision, despite the surrounding chaos. Of course, their words have no effect whatsoever on the CEC’s members or its decisions. In my view, however, we can revisit these statements in the future to assess the extent to which we, as Arabs in Israel, employed all available means to improve our status and the conditions in which we live in this state. The Arab MKs’ statements may also provide material for a possible self-evaluation and reflection by Israeli society in the future, if it ever reaches such a point.

Read also: The road to a 4th Netanyahu gov’t runs through Haneen Zoabi

In previous elections, a clear majority of the Supreme Court decided to overturn the CEC’s decisions to disqualify Arab parties and candidates. This fact, however, has not been enough to persuade the ruling parties to stop repeating this demeaning process. If the Supreme Court wants to take a serious position against the suppression of the minority by the majority, then it must not only overturn the disqualification of MK Haneen Zoabi, but also use its ruling to criticize the use of disqualifications as a tool for settling political scores or chasing votes on the eve of the elections.

The time has come to demand that the power to decide the disqualifications of political parties and candidates be wrested from the CEC, and instead transferred to a judicial body that would be charged with reviewing the disqualification motions from an objective point of view based on the facts of the case at hand, and charged with protecting the notions of “minorities,” “difference of opinion” and “basic rights.”

Salah Mohsen is the Media Director of Adalah – The Legal Center for Arab Minority Rights in Israel. A version of this article was first published on +972’s Hebrew-language sister site, Local Call. Read it in Hebrew here.

Related:
The road to a fourth Netanyahu gov’t runs through Haneen Zoabi
For a few votes, Labor joins the attacks on Haneen Zoabi