I write a lot about the term “pro-Israel,” since it is a highly-charged and problematic term used often with impunity. Regardless of what I think it means, it is clear that it is a subjective term that is often attempted to be passed off as an objective one. Even just saying that a working definition of “pro-Israel” is support for the right of Israel to exist as a Jewish state is unclear and debatable and thus demands qualification. So it is important to be critical of its usage and continue to ask the questions: what does it mean to support Israel? Is it support for a state, an idea, a government, a specific party in the government, etc.? (The same applies by the way for the question of what it means to be “pro-Palestinian.”)

So I was happy to discover that J Street has started a campaign asking people to go on camera and state what being “pro-Israel” means for them. While I have issues with J Street and have certainly been known to criticize them on this site, I appreciate the fact that they are at least asking the question, and allowing members of the community to express themselves. Here are a couple of the videos – they are slated to be presented at their upcoming annual conference at the end of this month. (Its still unclear whether Ehud Olmert will give their keynote address since they aren’t confirming it on their website yet).

The new “Zion Square” blog started and edited by Peter Beinart on the DailyBeast is also grappling with the “pro-Israel” concept. They just launched this week, and have already published a post by cartoonist Eli Valley that I love. It pokes fun at the recent “scandal” involving the New York Times‘ new Jerusalem Bureau Chief Jodi Rudoren, attacked for being biased against Israel for having tweeted with Ali Abunimah and Phil Weiss. Valley proposes a series of tweets Rudoren could upload that would be perfectly acceptable to the “pro-Israel” crowd, such as:

I think it’s super smart to have started out this blog with a little tongue-in-cheek attitude that shows it won’t take itself too seriously, laughing at the absurdity of where we have come to when it comes to Israel’s image and role. While it is certainly bold to launch a blog called “Zion Square,” and on an American site no less, it has promise. At least if you do not outright reject the right of people to still engage the question and merits of Zionism.

I’m sure it will be easy to levy criticism of the site – and I do already feel a conflict between its stated mission of transforming “Jewish discourse” and challenging “liberal Zionism” and at the same time constituting a platform for Palestinian and Iranian bloggers that criticizes Palestinian behavior – but this amusing commentary on the notion of what is “acceptable” behavior regarding the discussion on Israel is certainly a great way to start.

emailemail
Before you go…
A lot of work goes into creating articles like the one you just read. +972 Magazine is nonprofit journalism, owned by many of our writers, editors, and journalists. In order to safeguard that independent voice, we are proud to count you, our readers, as our most important supporters. With your support, we can keep +972 Magazine a strong, independent, and sustainable force helping push the global discourse on Israel/Palestine.
DONATE
More About Eli Valley 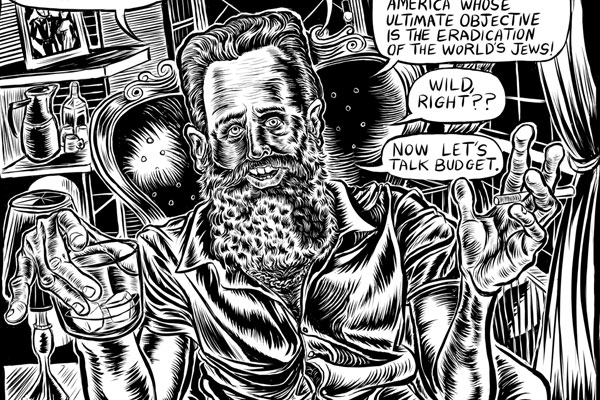 Theodor Herzl, terrible screenwriter
Our impassioned protagonist pitches his plot to producers. By Eli Valley Eli Valley’s comics collection, DIASPORA BOY: COMICS ON CRISIS IN AMERICA AND ISRAEL, will be released this Spring from OR Books. His website is www.elivalley.com and he tweets at @elivalley.This comic will also appear in the Fall issue of ‘World War 3 Illustrated.’
By +972 Magazine April 6, 2017 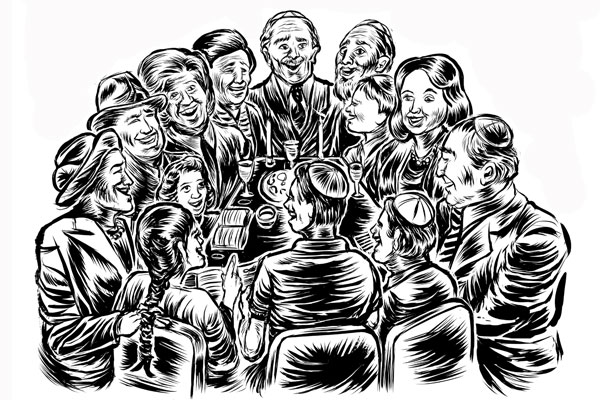 COMIC: The Haggadah’s evolution from generation to generation
Haggadot have historically evolved to reflect the needs and aspirations of their respective communities. Eli Valley envisions an American Jewish Haggadah for presidential primary season. Eli Valley is a writer and artist whose work has appeared in The New Republic, The Nation, The Daily Beast, Gawker and elsewhere. A collection of his comics will be…
By +972 Magazine April 19, 2016 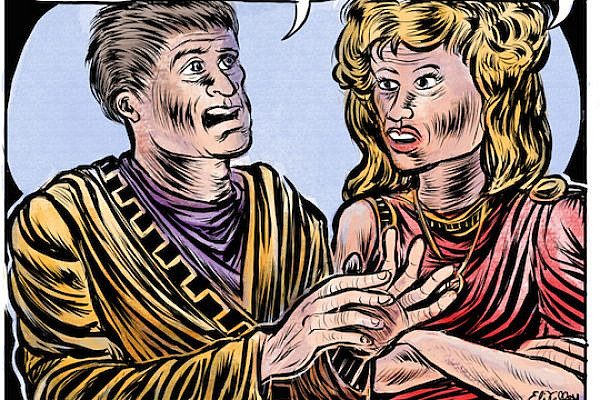 COMIC: Rome’s finest progressives and the scourge of Masada
Stanislaus and Cecelia, progressive Romans living in Judea, wanted nothing more than peace — but the Masadans gave them no choice. By Eli Valley Eli Valley is a writer and artist whose work has been published in New York Magazine, The Daily Beast, Gawker, Saveur, Haaretz and elsewhere. He is currently finishing his first novel. Eli’s website is www.EVComics.com and…
By +972 Magazine September 15, 2014