Notes from the J Street conference. 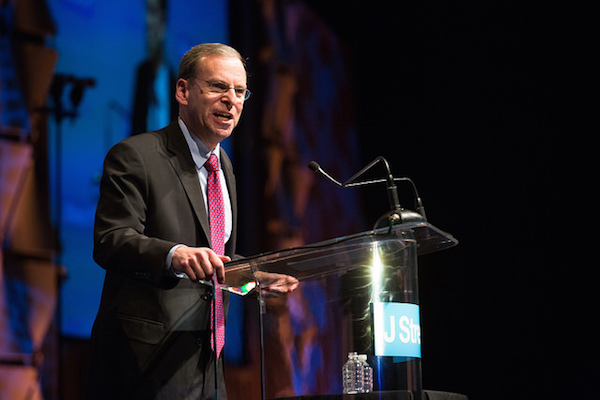 Since Netanyahu’s resounding election win last week, there’s been a deluge of coverage in the American media of a deepening disillusionment among U.S. Jews over Israel. Whether in the New York Times, the Associated Press, or Bloomberg, the thesis is more or less what you’d expect: Netanyahu rode to victory on a wave of racism, a rejection of peace with the Palestinians, and unprecedented disrespect for his number one patron, Barack Obama. These tactics fly in the face of a largely liberal community comprised of reliably Democratic voters.

That rift was represented this weekend in Washington, where the J Street lobby wrapped up its fifth national conference. Contempt for Netanyahu was prevalent and unapologetic. To the activists and supporters of the “pro-Israel, pro-peace” lobby, the Israeli prime minister is anathema to peace and the main obstacle to the two-state solution. They are shocked and they are angry.

To a first-time observer like me, the discourse characterizing the conference was a fascinating representation of both the evolution and stagnation that seems to characterize much of the U.S. Jewish community lately. Judging by applause levels at various sessions and plenaries, the professed commitment to universalism seemed real. Language of equal rights and dignity for all was met with enthusiasm. In one particularly satisfying moment, the crowd erupted on behalf of Hadash activist Nabila Espanioly, who accused incoming Zionist Union MK Yoel Hasson of paternalism when he smugly told her what he thinks the Joint List needs to do (lose Balad). Other speakers given the main stage also departed from J Street orthodoxy, declaring the two-state solution dead (Marcia Freedman) and even calling out the lobby’s support for the Gaza war (our very own Noam Sheizaf).

But there’s some dissonance accompanying these moments and all the hand-wringing over Netanyahu’s win. Old ideas and regressive sentimentality still take center stage. Say “two states” and you’ll get a round of applause. Say it in the same sentence as “Zionism” and you might get a standing ovation.

I heard a number of strong voices in several breakout panels, offering sharp analysis and new thinking. Many of J Street U’s young activists are similarly impressive, and some have graduated to activism far more critical of Israel. Unfortunately, that freshness of thought doesn’t extend to some of the conference’s headliners. One particularly shameful keynote address was delivered by Yesh Atid MK Yaakov Peri. Just out of the last Netanyahu government, Peri – also the former head of the bastion of human rights and dignity known as the Shin Bet – spoke with a straight face on his prescription for a two-state solution.

J Street operates in a hawkish playing field where it must compete with groups well to its right, whose approach to dissent on Israel are more McCarthy than First Amendment. It has paid a price for its more moderate positions, most notably the rejection of its bid to join the Conference of Presidents of Major American Jewish Organizations, an important national coalition of Jewish groups. The rules of that playing field may account for its misplaced antagonism toward BDS, along with its support for last summer’s war (and the one before that) and uninterrupted American aid, the primary enabler of Israeli policy in the occupied territories. The lobby moves within the borders of consensus, even when that consensus is stale or harmful.

It seems to me that J Street might be more impactful by focusing on cultural change within the American Jewish community rather than incessantly championing the two-state line as though it were ordained from on high. On Monday, hundreds of J Street U activists marched to Hillel’s headquarters to protest the president of Hillel International’s decision to cancel his address to the conference. That’s a healthy way to challenge the right-wing Israel thought police that prevails in institutions on and off university campuses.

At the end of one of yesterday’s plenaries, Daniel Levy noted that “Netanyahu is a gateway drug for a more honest conversation on Israel.” That is definitely true. Liberal American Jews are angry over Netanyahu’s win because they don’t see themselves in the Israel they think he represents. J Street should seize this moment by expanding that conversation, instead of aligning with positions and parties that don’t challenge the status quo. If it does, maybe the “pro-Israel, pro-peace” lobby could also be a gateway to something better.