As events at the Rothschild tent camp have recently demonstrated, whether the J14 movement likes it or not, it is forced to engage with the Palestinian issue 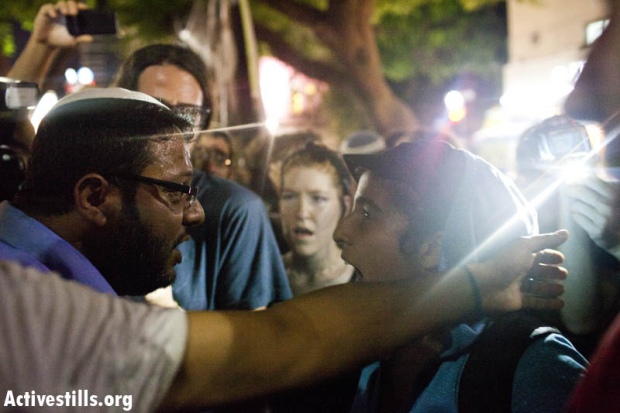 What started as a protest about housing prices in Tel Aviv nearly a month ago has morphed into a far-reaching and diverse movement calling for changes in the socioeconomic structure of nearly every aspect of life in Israel, from education and welfare to LGBT and freelancer rights. Yet, although Arab Israelis are taking a part in the protests and author Odeh Bishart was a speaker at the 200,000-strong protest in Tel Aviv last Saturday, one issue has been avoided: the relation between Jews and Palestinians—even though this is normally the single most critical issue in Israeli political life, be it in the form of Israel’s Knesset legislation regarding the rights of non-Jewish citizens or the diplomatic and security aspects involved in the forty-four-year occupation of the West Bank.

Some have claimed that the social protests taking place have nothing to with such questions, or that dealing with them would hurt the movement’s ability to reach a consensus among the various groups taking part in it, but events have had their own way of proving those holding this notion wrong.

Protesters on Rothschild Boulevard had to actively confront the Palestinian-Jewish question with the appearance last week of Kahanist activists Baruch Marzel and Itamar Ben-Gvir, accompanied by hilltop youth. These uninvited guests brought with them two messages to add to the protest: “Tel Aviv is only for Jews,” and the solution to the housing crisis can be solved by building in the West Bank (in Hebrew, this is very catchy: “pitaron” (solution) and Yehuda ve’Shomron (Judea and Samaria) rhyme).

Most Israelis rarely if ever visit the West Bank, and thus are seldom forced to confront the views or demeanor of people like Marzel and Ben-Gvir. Out of sight is truly out of mind. In this sense, the presence of Kahanists in Tel Aviv actually makes the Israeli public confront social justice and equal rights apart from security issues, and outside the context of the occupation. The Kahanists’ presence has forced the tent protestors—most of whom have a center-left orientation—to respond, and indeed there have been minor clashes and confrontations between the two sides in recent days. The tent camp’s assembly has decided to ban racist slogans from the protest, but to allow Kahanists to pitch their tents, mainly due to the lack of any legal, nonviolent way to evict them.

Another tent, called “Tent 1948,” a small Palestinian-Jewish compound at the corner of Hashmonaim Street, is challenging the protest movement from the left, by reminding people of land issues that followed 1948, insisting that democracy cannot apply only to Jews, and calling for equal distribution of land and the recognition of Bedouin villages. Tent 1948 draws the connection between economic policies—especially ones dealing with real estate—and the Palestinian-Jewish question. So far, the tent has largely been welcomed into the protest, suggesting that the residents of the Rothschild tent camp prefer their egalitarian message to that of Jewish supremacy in the Land of Israel. At the same time, there were reports of requests by the camp organizers to refrain from having Palestinian flags at the tents.

The events surrounding these two tent camps—the Kahanists and Tent 1948—convey an important lesson for those who wish to carry the social justice message forward in the months and years to come: Dealing with the relationship between Arabs and Jews, past, present, and future, is simply unavoidable. Every aspect of life in this country—from the distribution of resources to more trivial matters like food, music, and outdoor activities—contains elements of the Jewish-Palestinian relationship in it. In the words of Israeli poet Meir Ariel, “at the end of every sentence in Hebrew, even one beginning in Russia or in Hollywood, sits an Arab.” People may talk about things that seem unrelated to the conflict, but they will inevitably arrive at that point.

The protesters’ call on the government to assume responsibility for the welfare of all its citizens necessarily calls attention not only to the marginalized lower and middle classes, but also to Palestinian citizens’ relations with the state—not to mention those Palestinians who are subject to Israeli control but are not even citizens. As the residents of the Tel Aviv tent camp are learning, without addressing those questions, social justice cannot be re-imagined or expanded.