Noam Gur was just another teenage girl from the northern town of Nahariya. She grew up in a family that was not politically involved, went to the same school as everyone else, and still doesn’t understand why she’s the only one who sees what her peers are missing. In a month’s time she will refuse to enlist in the Israeli army because of the occupation, and will most likely be imprisoned. An interview.

For years I have been told that the control over the Palestinian people is supposed to protect me, but information about the suffering caused due to the terrorizing of the Palestinian population was omitted from that story. The road to dismantling this apartheid and achieving true and just peace is long, and hard, but as I see it, actions taken by the Israeli army only push it further away. Over this past decade, the Palestinian people have been increasingly choosing the path of nonviolent resistance, and I choose to join this path and to turn to a popular, nonviolent struggle in Palestine, rather than to serve in the Israeli army and continue the violence.

These words were recently put down by Noam Gur, 18, as a kind of “imprisonment statement,” which is now beginning to be circulated in mailing lists and social networks in Hebrew, Arabic and English. A couple of week ago, Gur was informed that her request to obtain conscientious objector status from the relevant military committee was scrapped, and that she is obliged to report for mandatory service on April 16. On that day, she intends to refuse the draft, at which point she will most likely be sentenced immediately to between two and four weeks in military prison, at the end of which she will be forced to refuse again, sent back to prison, and so on for a couple of months. After that, she will probably be released on a mental health clause, as most conscientious objectors have been in recent years. 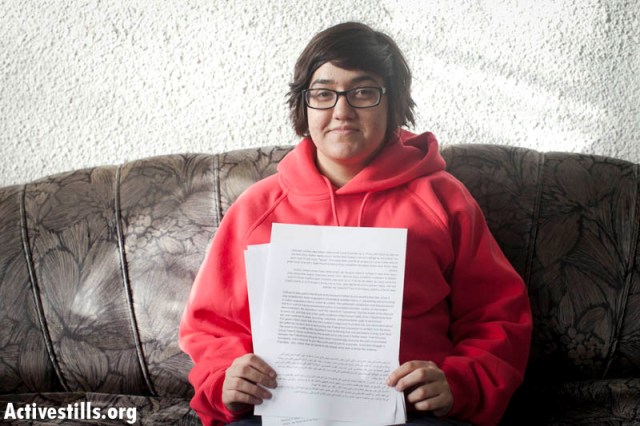 Noam Gur and her letter to the army (Oren Ziv / Activestills)

‘I refuse to support a long and preventable cycle of violence’

“My family was never politically active or anything, both my parents went to the army, and my older sister served in the Border Police. I grew up seeing myself as a devoted Zionist-leftist, the kind that believes in human rights and in the possibility of maintaining an ‘enlightened occupation’ without harming anyone,” Gur told me. “I have no idea how I drifted so far away from most of my friends. From a very young age I remember having soldiers in school and day trips to military camps (a regular part of Israeli school system curriculum, H.M.), and it was supposed to be obvious that everybody goes to the army – no question about it. I remember that even before I learned anything about the occupation I thought it was weird and somewhat fucked up that you can’t even raise questions on the notion of the mandatory draft.”

The apparent natural inclination to challenge the obvious got Gur searching for materials on the Palestinian Nakba, and then Palestinian and Israeli soldiers’ testimonies about life under occupation in the West Bank and Gaza. By 16, she knew she wouldn’t enlist due to what she defines in her statement as “population-transfer, murder of non-violent demonstrators, the apartheid wall, the massacre operations that the Israeli army chooses to carry out, and the rest of the daily violations of the human rights of the Palestinians, [which] have led, and continue to lead, to a long, indefinite, and preventable cycle of bloodshed.”

“It took a while before I broke my decision to my mother, and my high school friends know where I stand, but it’s not something I talk about too much,” says Gur. “I go to West Bank demonstrations occasionally, but I’m not active with any specific group. I was actually really hoping to obtain the CO status, and was surprised when they refused to even see me.” 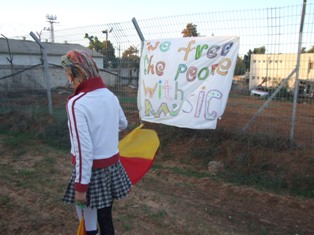 ‘Israeli crimes are out of public sight’

IDF regulations specify the conditions under which a would-be recruit may be found eligible for conscientious objector status. These focus mainly on the demand that the refusal to join the army would be “generally pacifist,” that is – a refusal to partake in any and all sorts of violence, not only those by the Israeli army. That is why Gur stressed broader issues than just the occupation in her letter to military authorities; she wrote of the chauvinism and sexism inherent in armies throughout the world, of the tendency to solve political problems with the use of arms and of the way armies enhance national divisions between people. Gur also wrote that experiencing the Second Lebanon War and the 2008-9 attack on Gaza as a teenager had a deep influence on her life, and strengthened her belief in non-violence. However, the army rejected her petition, and the road to prison was laid out.

“I actually think prison is not going to be too bad. After all – it’s just a couple of months,” Gur estimates. While the first decade of the third millennium was dotted with refusal movements in Israel, in recent years these have slowly fallen off the map, and aside from the random reserve-soldier-turned-CO – Gur is the first draft objector to go prison in quite some time (full disclosure: I myself refused the draft in 2002 with several friends, and spent two years in prison). “The political reality has changed since the large refusal initiatives. At the time people, were refusing when Israeli crimes were plain to see – during the Intifada and the wars on Lebanon and Gaza. Now the same crimes are out of public sight. However I’m glad to say that while I’m going to prison by myself, I’ve had a lot of support in recent days, mainly from abroad and from Palestinians, and that means a lot. 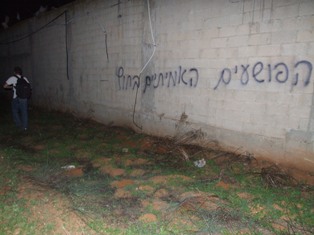 'The real criminal are outside' sprayed on military prison walls, 2008 (Haggai Matar)

“I know my refusal won’t end the occupation or change the world, but perhaps it’ll have some small effect on even a single person or two. Perhaps more Palestinians will hear of it and will be happy to see that not all Israelis are the criminals at the checkpoint or the soldiers shooting tears gas canisters at them in demonstrations. But general goals aside, I just want to feel right about myself. I want to know that I did all that I could, and that I did try to make a difference – or at least that I was not a partner in crime.”